Known for its proximity to adventure and its breathtaking natural beauty, Pokhara is nestled at the foot of the Himalayas. It’s a hippie destination set to absorb Nepal’s hospitality and relax after a trekking expedition. Martyn and I stayed a couple of days here after returning from ABC, which was mostly spent with beers in hand. Plastic chairs were lined up like little soldiers, facing Lake Phewa, waiting for sunset. The sun sank behind the mountains, illuminating them in hues of lavender. 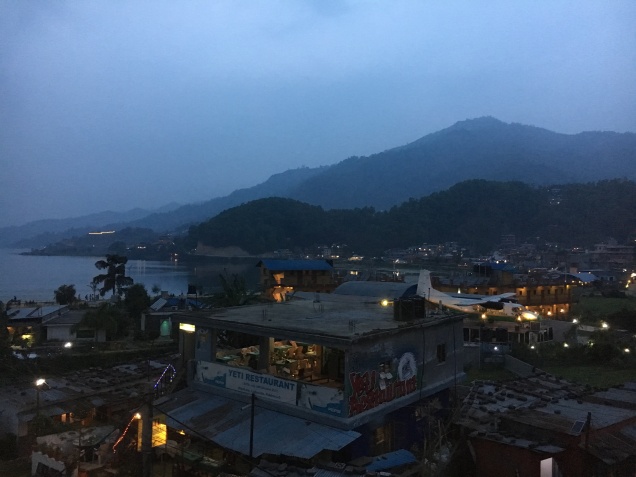 We each got a two hour massage (for $23USD) and met up with the Texans over dinner for a raucous hilarious night. Of course, we did manage a short walk to the World Peace Pagoda with sweeping views over Lake Phewa and then hired a dugout canoe to ferry us back across. I held my breath that we wouldn’t sink as we floated over a whole canoe graveyard that were like ghosts under the surface of the water. 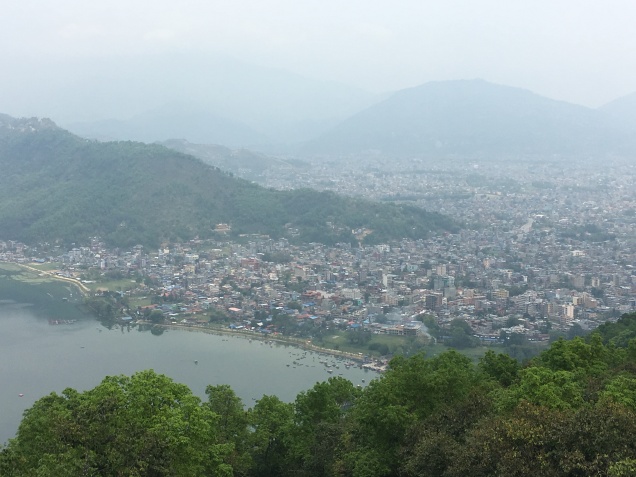 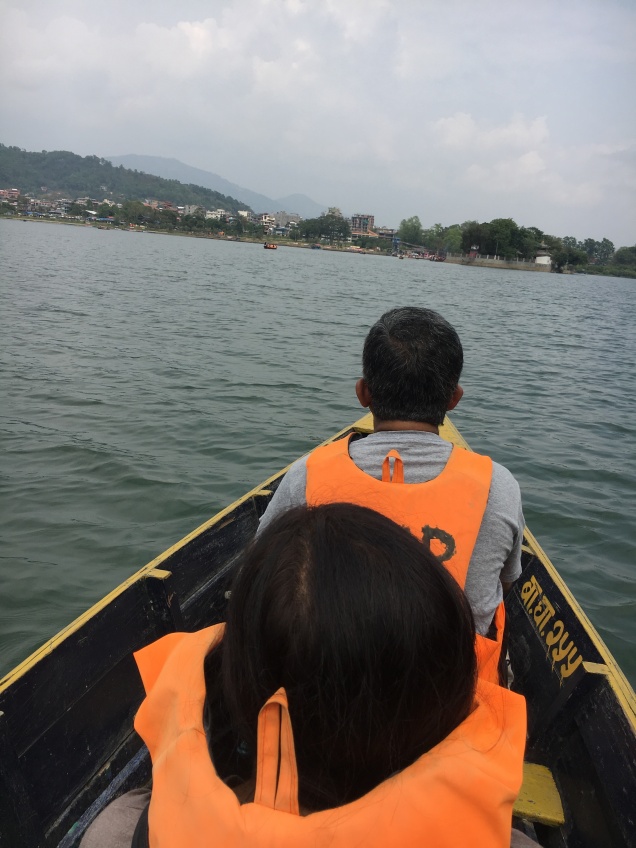 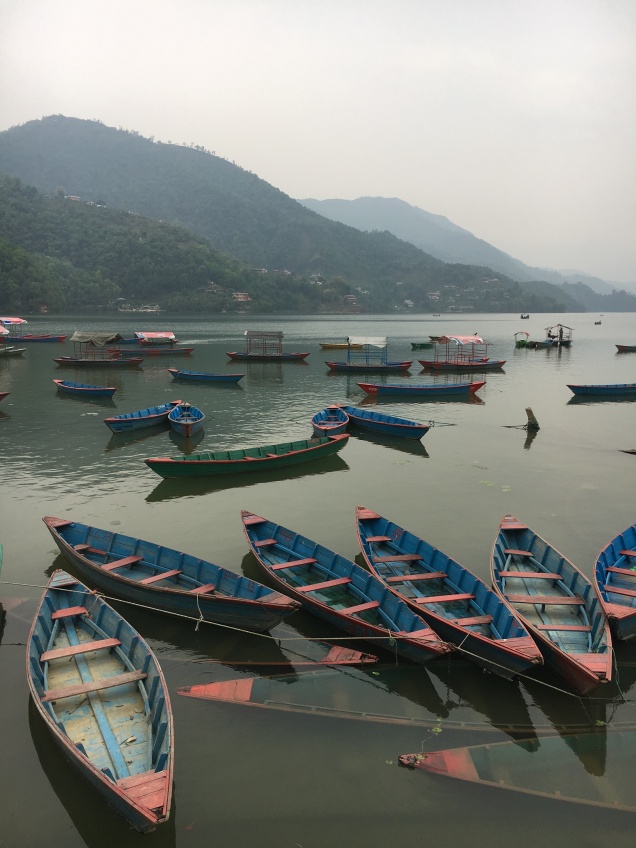 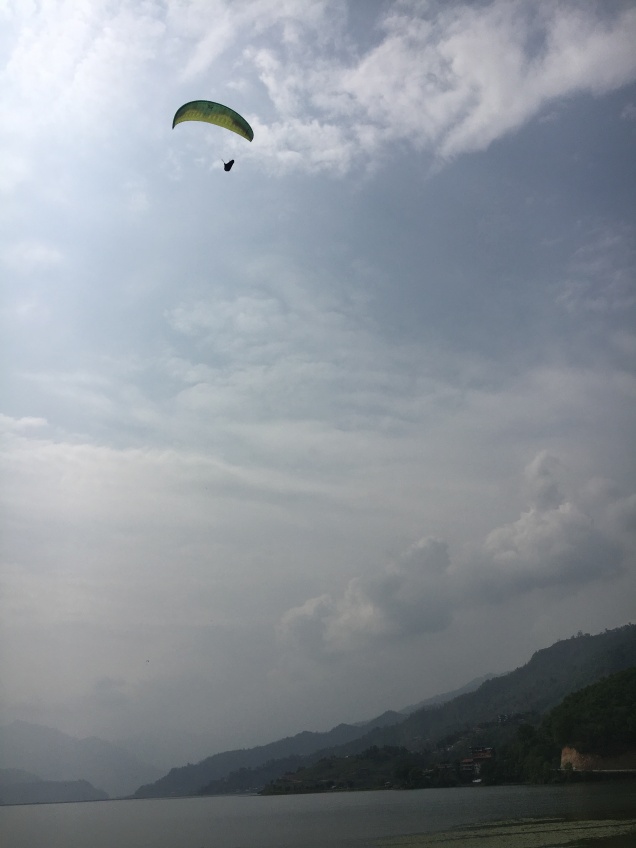 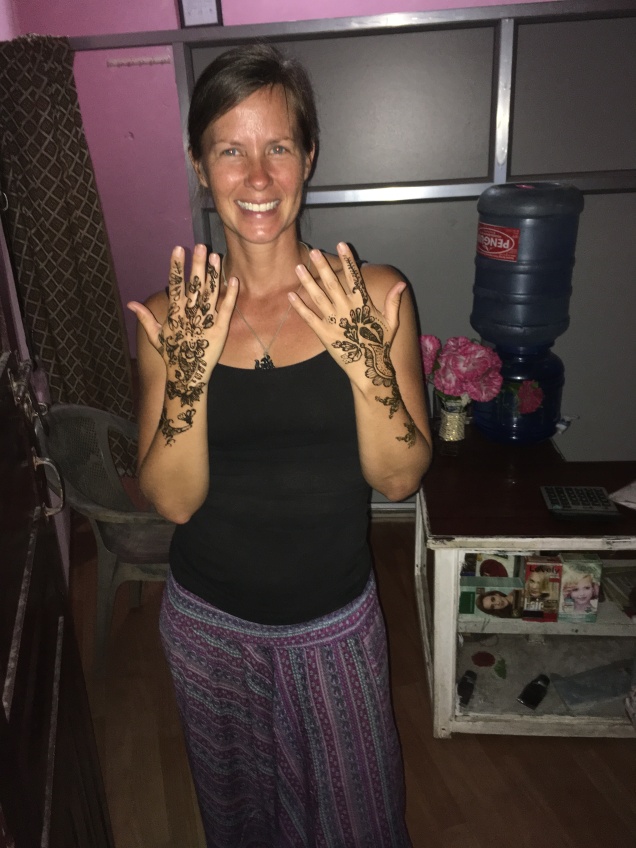 On the morning we were due to leave for Kathmandu, Martyn and I walked to the bus station and I bought some buttery cookies and tea in the parking lot. I offered to share with Martyn, but he said he wasn’t hungry. I reminded him that our bus ride would be at least 8 hours, but he just shook his head. We stopped a few times throughout the journey, but he didn’t eat all day and was obviously not getting on well. I know how awful it is to be trapped on a bus throughout the many stages of what was most definitely food poisoning so I tried to think of suggestions to make him more comfortable. I think he probably just wanted me to let him be.

I had been to Kathmandu before, in 2013, and I had found it loud and dirty and intimidating. Now with two years of experiences in my blood, I absolutely adored Kathmandu. It has an incredible food scene. The people are charming and kind. The atmosphere is welcoming and a little romantic. I had been looking forward to going back to some of the same haunts from last time and showing Martyn around, but by the time we reached the city on that first night, he was too ill to leave the room.

During my first visit, it was a three week vacation from work. I trekked to Everest Base Camp, took a jungle safari in Chitwan National Park, and toured Kathmandu’s most famous landmarks. I also met Jeremy and Angie (from Living the Dream) on this trip and I credit them with the inspiration for me to leave in the first place. I was already considering a round the world trip, but actually talking to someone who had done it, who was DOING IT right now, was key. They were about 6 months in when I met them. Jeremy had handed me his business card with his blog and a photo of him petting a tiger in Thailand. My imagination went wild from that moment onward and I still consider him my mentor even though he probably thinks I’ve graduated by now. I remember we had dinner together where Angie bravely ordered a salad. She was craving fresh vegetables. I cringed at the thought of eating a raw vegetable that may have been washed with unclean water. But with experience, I now see that you become more confident choosing restaurants where you can order salad and which ones to steer clear. Not all restaurants are created equal. Also, Angie got her hair cut in Kathmandu, which in my opinion, made her so cool. To be gone from home so long so as to need a haircut in another country, seemed almost unrealistic at the time. I had had five haircuts since leaving home and each time it made me feel like a true traveler.

I went to dinner by myself at Revolution Cafe. I had eaten there my first time in Nepal on my very first night. I recalled the electricity had gone out in the middle of dinner and the server had cheerily delivered candles to the tables. This time the electricity was on, but candles decorated the tables anyway, just in case. I ordered spicy vegetable biryani and lemon soda. I ate on the patio out front and loved listening to the honking horns and chanting vendors.

The next morning Martyn wanted to give it a go and do some touring. We walked to Durbar Square, which had been heavily impacted by the earthquakes in 2015. Crumbling chunks of stone were still scattered two years later. Ghastly scars were visible on the facade of a temple where the Earth’s monstrous power had shifted so dramatically. Half a dozen structures lay in rubble. It is still a remarkable sight and even more so to have seen it both before and after the damage, but reconstruction is in progress and will likely continue for a decade or more. The idols of Shiva, Vishnu, and Ganesha, are draped in garlands of marigolds, red and yellow powders fleck their feet. The guard of this palace, Hanuman, the monkey god, has long been turned a bright hue of orange from generations of worshipers smearing vermilion paste on his face. He is cloaked in red and protected by an umbrella and scaffolding should more of the building crack around him. 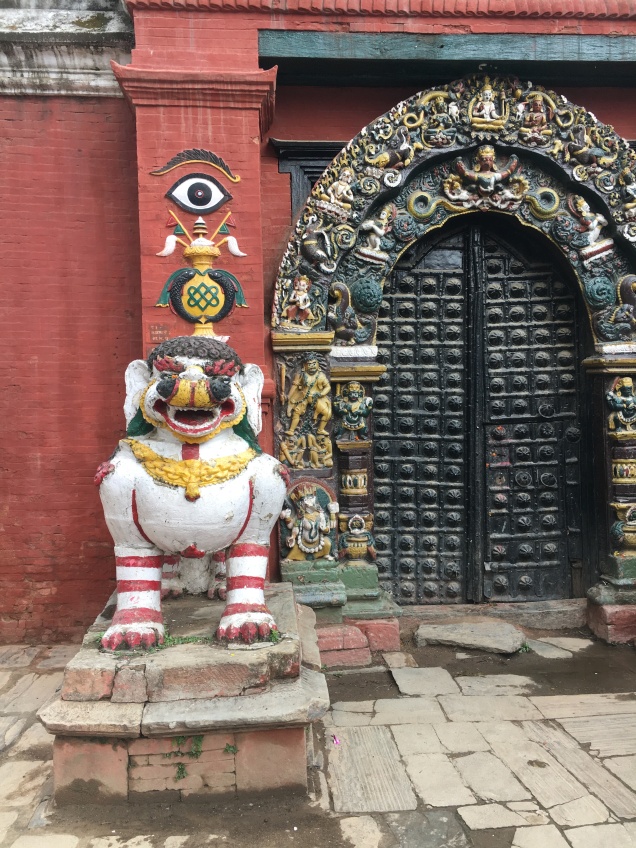 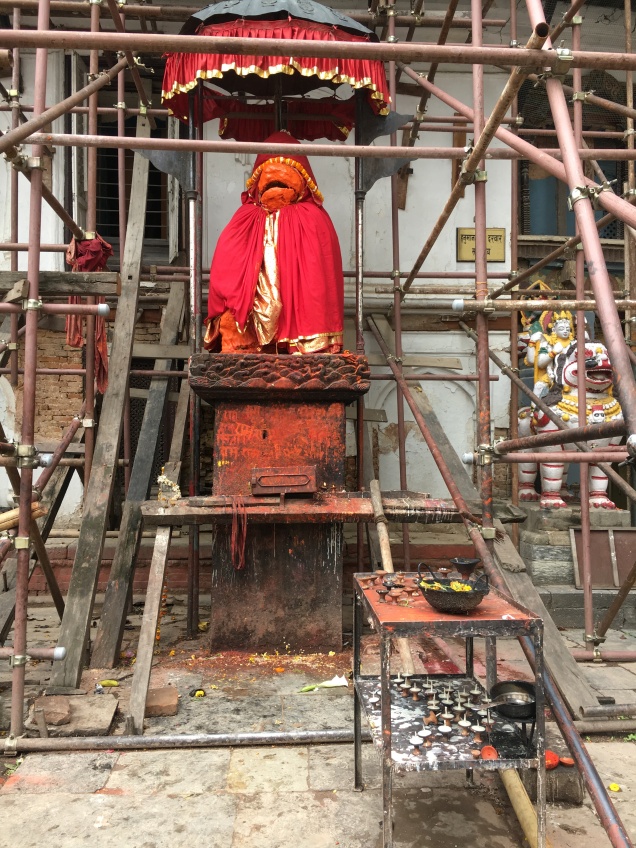 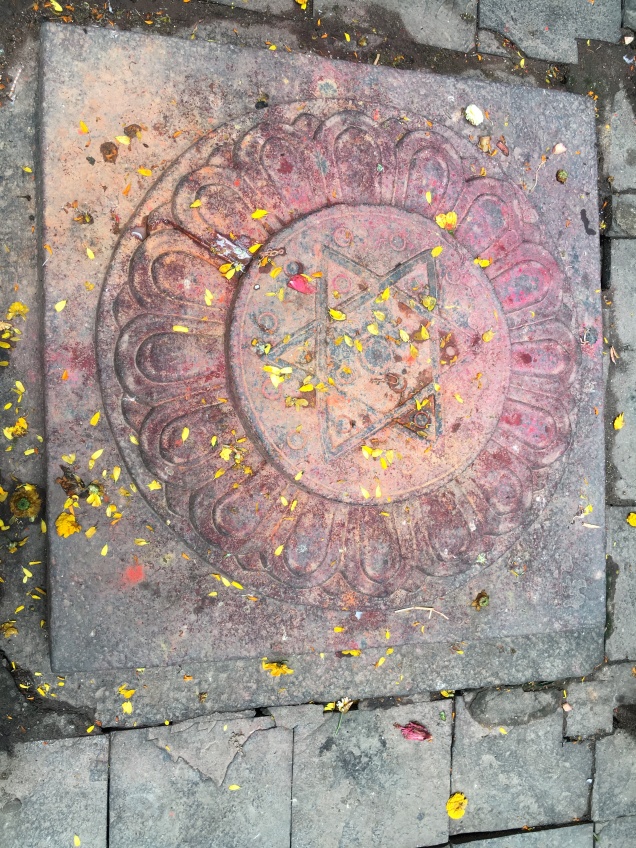 The narrow streets are full of character so we wandered awhile, through Kathesimbhu Stupa, where we were the only visitors, and Garden of Dreams, where families and teenagers with their friends found some green space amongst all that dust. Martyn was still not feeling well, but didn’t want to admit it. We ate at OR2K, one of my favorite discoveries from 2013, but Martyn barely touched his food. We sat on the floor, surrounded by cushions and tourists, while I inhaled savory dal bhat with crunchy papadum, a disc-shaped cracker. He wanted to go back to the room. 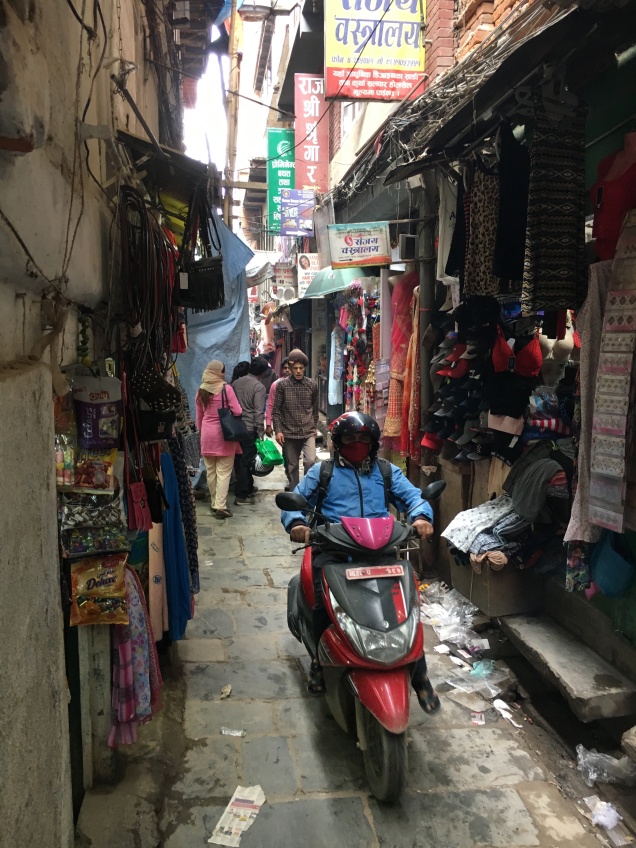 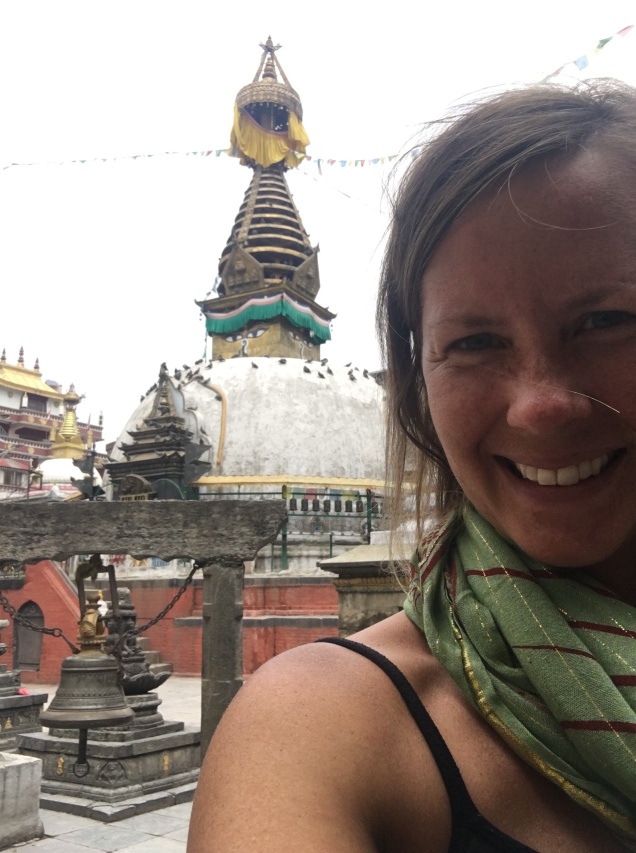 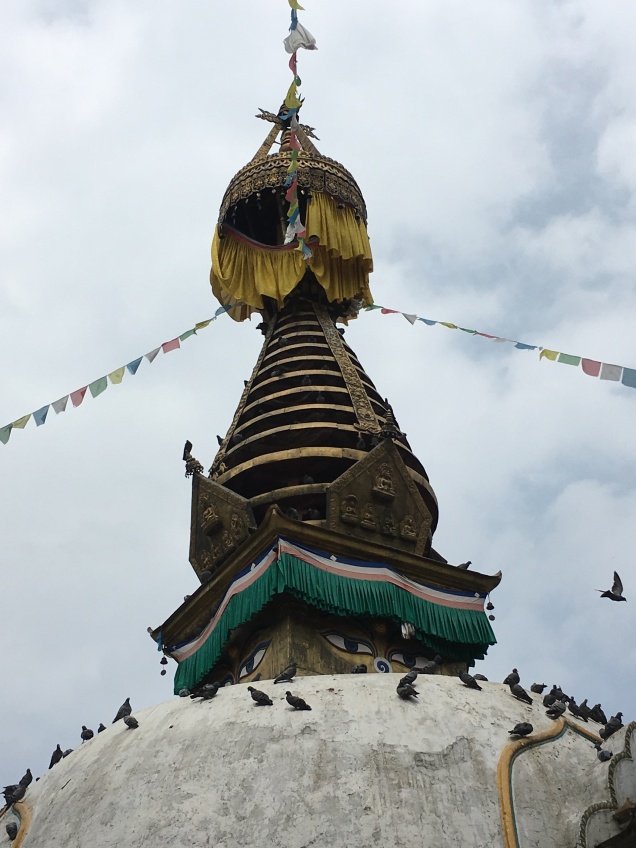 It was kind of strange how he had so suddenly fallen ill, while I had been eating in dodgy restaurants for months. But then again, perhaps I was developing that mythological bullet-proof stomach that is a goal of most solid adventurers.

Again, I ate dinner by myself that night, but it was ok. I had already visited Kathmandu’s most famous stupas and temples so I had some reflecting to do. I would be leaving Kathmandu tomorrow. I would be flying across the Pacific for the first time in more than two years, not to go home yet, but it felt like an ending. It felt like I had almost circumnavigated the globe…I suppose because I had.