Most long-term travelers will celebrate a birthday on the road and for me, it was fun to plan ahead to pick a perfect spot for the occasion.  Seeing as I’m a big fan of trekking and the outdoors, the timing seemed to work perfectly for a 3 day excursion into Colca Canyon, a canyon that is reportedly more than twice as deep as the Grand Canyon in some places.  It is also one of the best places in the world to watch the massive condors that soar on the updrafts the canyon creates.

From a home base of Arequipa, would-be trekkers are picked up from their hotels and hostels at 3:00am for a 4 hour journey to the village of Chivay, where there is a brief stop for breakfast, and then continue on to Cruz del Condor, another hour in a cramped van.  By the time we reached the condor viewpoint around 9:00am, we were excited for the fresh air and chomping at the bit to start the trek.  But FIRST, there were condors to admire and they did not fail to disappoint.  As if on cue, we saw one condor sail past, then, two…three…..twenty….  They truly are magnificent.  I had reconnected with Dave, from my Death Road adventure, for this trek and he declared that if he could be any animal in the world, a condor would be it.

Trekkers are given the option of spending 2 days/1 night or 3 days/2 nights in the canyon.  It’s the exact same route, but the 2 day people cover twice the distance on the 1st day.  Physically, this didn’t sound like a problem but I’ve made a habit during this journey of not rushing.  You miss out on experiences when you rush…..so the 3 day trek it is!

Besides Dave, we were joined by Ariana and Virginia, both from Switzerland who had been teaching in northern Peru, and our guide, Juan Carlos, who had grown up on these very trails where we were about to trek.  The first day involved a very steep decline – we were making our way to the canyon floor after all.  Now, for me, I feel less surefooted going down than going up.  When loose rocks litter the path, there is always something to slip on and you need to keep your concentration focused.  While I often like to pretend that I’m 25, being as it was my birthday weekend, I was all too aware that I am NOT 25 and the last thing I needed was to slip and fall off a mountain!  At one point, Dave and I were following Ariana and Virginia, who took a “shortcut” down a steep enbankment.  Before we knew it, we were all in over our heads.  I immediately retreated and climbed back up before I found myself sliding down on my behind.  The other three were too far down to go back so they carefully picked their way along the steep path.  Unfortunately, Ariana wasn’t so lucky.  She slipped and landed in a thorn bush so when we were all reunited further down on the path, she had the other 4 of us to help pull thorns that nearly covered her from head to toe. 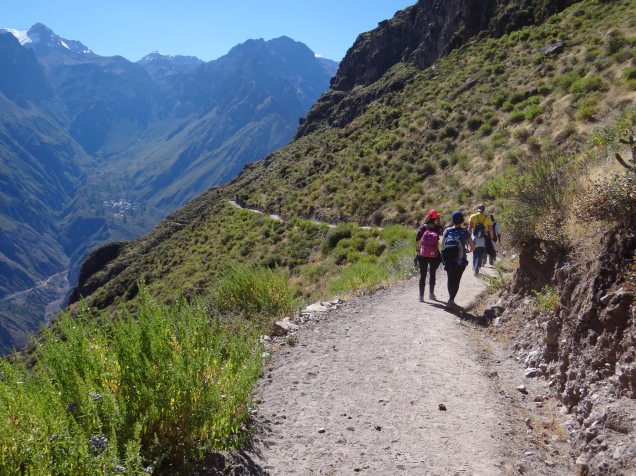 We reached our destination by early afternoon for a late lunch.  It turns out it was the home of Juan Carlos’ family, converted into a lodge for canyon trekkers.  It lacked electricity and shower facilities, but it had flush toilets and amazing meals  prepared with regional ingredients by Juan Carlos’ mom.  We had the afternoon at our leisure to read or take a nap in the sun.  In the evening, we ate dinner under the stars and turned in early because we were due for a sunrise wakeup call the following day. 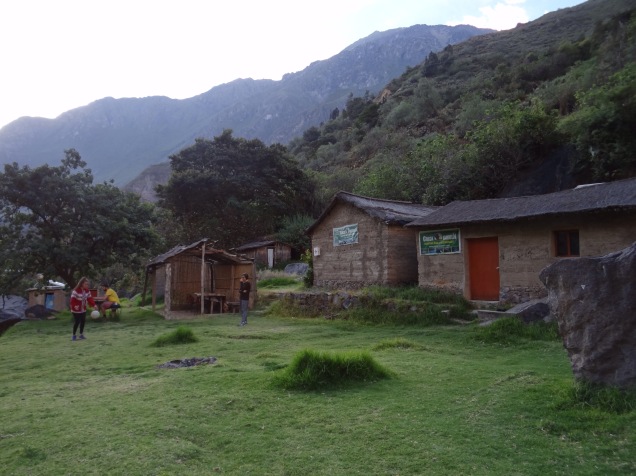 Day Two involved simply traversing from one side of the canyon to the other, only moderate inclines and declines. My favorite part was stopping mid-way at a convenience store, if you will, where they prepared fresh juice for us, made to order.  This almost seemed like a mirage amid the scraggly thorn bushes and dusty trails.  By noon, we were expected to arrive at The Oasis, a cluster of lodges with pools and hammocks and incredible views from the base of the canyon.  This is where I was most satisfied with my decision to spend 3 days trekking instead of 2.  Because we had a shorter distance to walk, we arrived to The Oasis early enough in the day to go swimming and visit the river.  The 2-day trekkers joined us around 5:00 when it was too cold to enjoy any of the amenities the lodge offered. 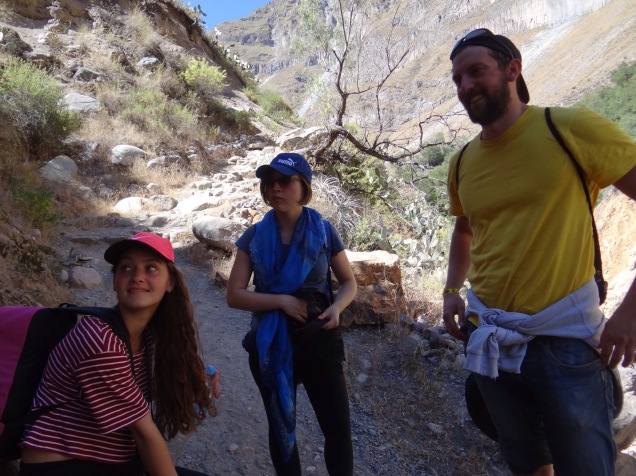 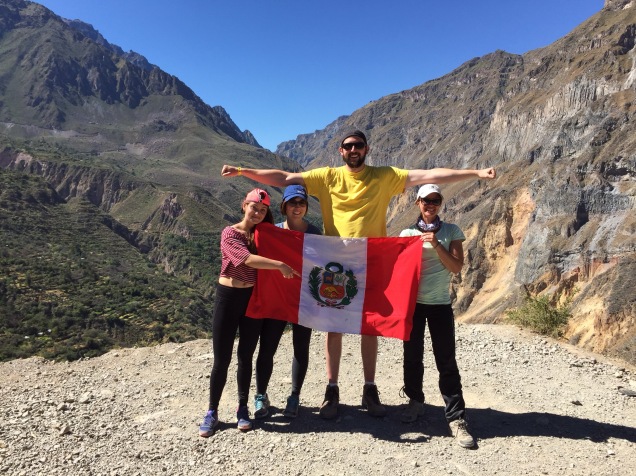 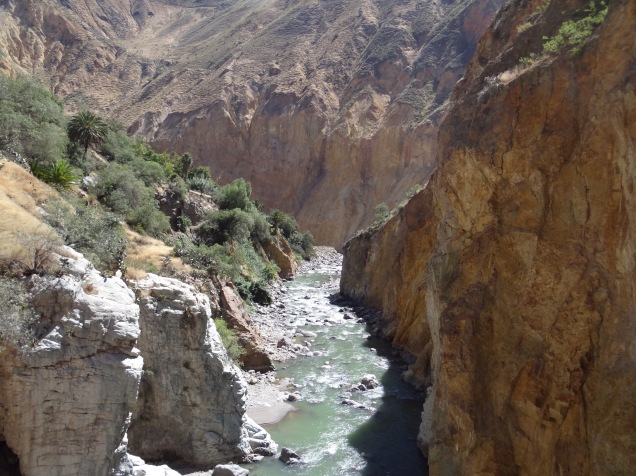 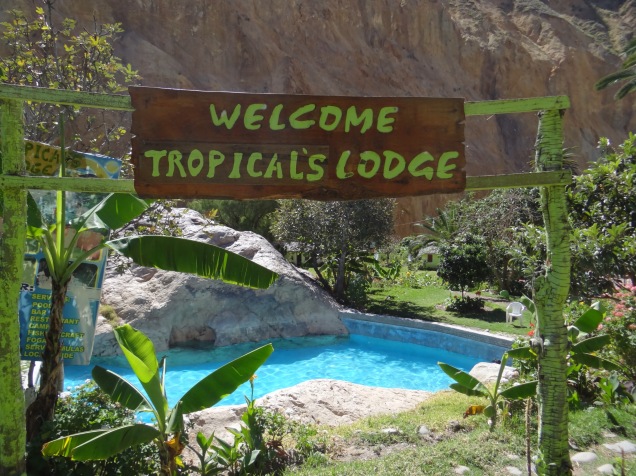 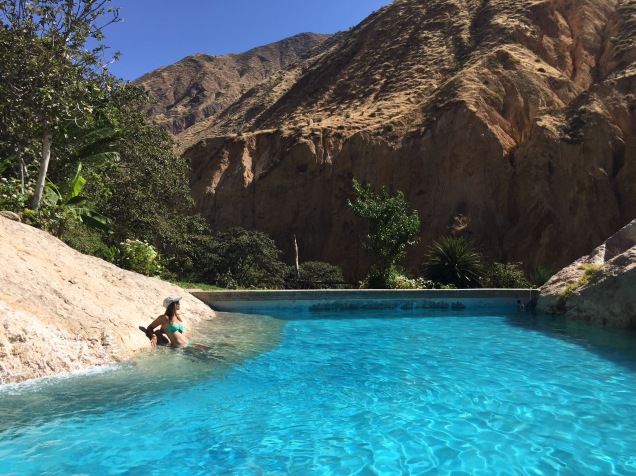 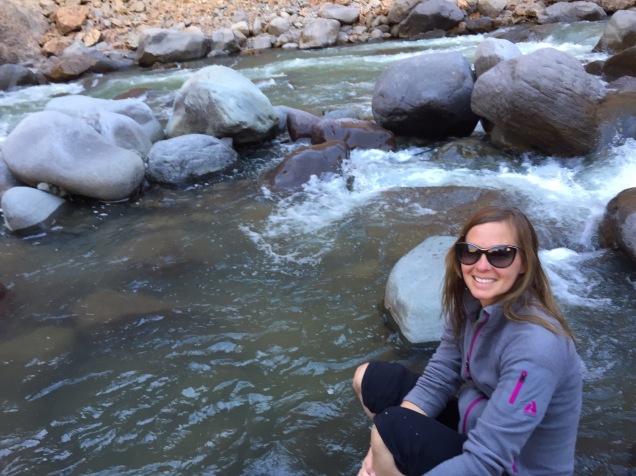 Day Three, again started bright and early.  We had to trek all the way OUT of the canyon (which, of course, means a constant uphill climb) in time to beat the mid-day sun and to arrive back in town for our ride to pick us up around 10:00.  Our group pushed on at a good clip with only a few breaks so we beat most of the other trekkers to the top.  It’s always exhilarating to wake up before the sun and feel like you’ve accomplished so much early in the day.  We still had a long drive back to Arequipa in front of us, but with our energy reserves completely spent, it seemed like a reward to settle into the van. 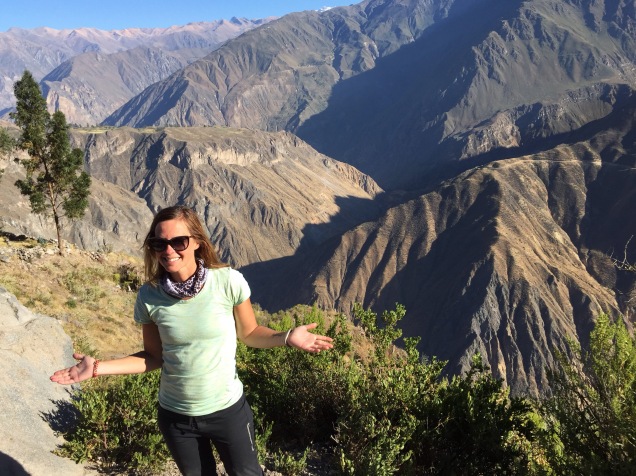 The following day, back in Arequipa, it was my birthday and I couldn’t think of a better way to spend it than having lunch with Dave, rehashing our trek, with a pisco sour and a good view.  And with some time to heal, it also seemed like a good spot for me to finally reveal my real birthday gift to myself.

With some time to reflect, the gift wasn’t the ink itself like I thought at the time – the gift was the previous 3 months and all the months that are to come.

2 thoughts on “Conquering the Canyon”