Overnight buses, while being part of the experience, have become my arch nemesis.  Generally, I don’t mind taking buses.  After all, I have come all the way from Patagonia by bus.  It usually represents a good time to read or listen to podcasts without feeling like I should be doing something else instead.  Overnight buses, on the other hand, do not suit me at all even if I can save a few bucks on accommodations.  Besides the fact that I never sleep well, there are usually other distractions like making sure you always have your hand on your bag lest it walk away while you snooze and bus drivers that treat the mountain roads as a race course so that you are thrown from side to side in your non-belted seat.  Unfortunately for me, sometimes there is no other option.  The trip to Trujillo was expected to take about 10 hours.

In front of me sat a mother and daughter.  They had been living in Lima for about 15 years but were originally from Trujillo.  They immediately befriended me, but gave the same questions I was quite used to now – “A woman?  Traveling alone?  Where is your husband?”  I would love to answer that I haven’t met him yet, but I don’t think this translates well and it’s safer and easier to just say that I’m meeting him later.  That relaxed them a bit but then they started giving me the “Trujillo is dangerous speech.”  Usually, I would just think here we go again, but this was coming from locals so I started to get nervous.  Well, my destination wasn’t really Trujillo but Huanchaco, a nearby beach community, so all I had to do was get out of a crowded bus station, hail a taxi, and I was home-free right?

Not quite….The mother and daughter insisted I take the bus because it was safer.  Great, I can do buses!  Again, not so fast.  The city bus to Huanchaco doesn’t leave from the bus terminal – you have to flag it down from the street and there are lots of different buses going different places in all different colors and they don’t stop at specific places.  I clearly seemed confused and nervous with their instructions so when the uncle comes to retrieve them from the terminal, they explain to him my predicament and they all 3 agree that I must ride with them.  At first, I thought they were going to drive me all the way to Huanchaco 20 minutes away.  We hopped in the car and I realized they were going to drop me off at the bus stop.  Ha, ok, that works too!  Little did I know that dropping me off at the bus stop meant catching up to the bus on the route, cutting it off and stopping right in front and waving frantically to indicate that I wanted to get on.  Sheesh!  We tried this 3 times before the driver finally caught on. Only in South America….

I finally made it to Huanchaco and it was a staggering 7:30 am. Grrr overnight buses. Huanchaco is a surfers’ haven and a very chill little beach town. I checked in to Casa Fresh, but of course, my bed wasn’t ready so I decided to have breakfast and take a look around.  At first glance, I realized that I would either be surfing or doing nothing.  The beach was terrible and made up mostly of little pebbles that were painful to walk on.  I was mostly leaning toward doing nothing (that sounded like my current speed!), but there was this little traveler voice saying that I should give surfing a shot because that’s what one is SUPPOSED to do in Huanchaco.  Sometimes I hate that voice….

I wish I could say that I tried surfing and victoriously stood up that first day, but in reality I didn’t even try it.  I sat on the crappy beach contemplating my decision.  I watched a girl about my size that seemed like she knew what she was doing.  She did the obligatory stretching and adjusted her wetsuit.  She carefully tiptoed through the minefield of sharp pebbles and started to swim out with her board, except that she couldn’t get past the first set of breaks.  The surf was too strong and she was constantly pushed off downshore where I couldn’t even see her anymore.  This wasn’t a good spot for a beginner.  Ok, that’s not the only reason I didn’t go – I also just don’t like the thought of being pummeled by water, getting shafed, and having my swimsuit pushed up, down, and twisted in all directions.  It didn’t sound fun to me and the only reason I considered it is because it was one of those things I felt like I should do as a traveler.  Well, guess what?  It felt pretty liberating to say no thanks.  This journey is about pushing my limits and stepping outside of my comfort zone, yet if something isn’t fun, then from now on, I skip it.  Decision made!

I spent 2 full days sampling Peruvian fare at the beachside restaurants, renewing my run routine, and finally getting my blog-writing rut unstuck.  I became a regular at the Chocolate Cafe (3 times in 2 days – don’t judge) for their excellent breakfast options and the chocolate brownie, of course. 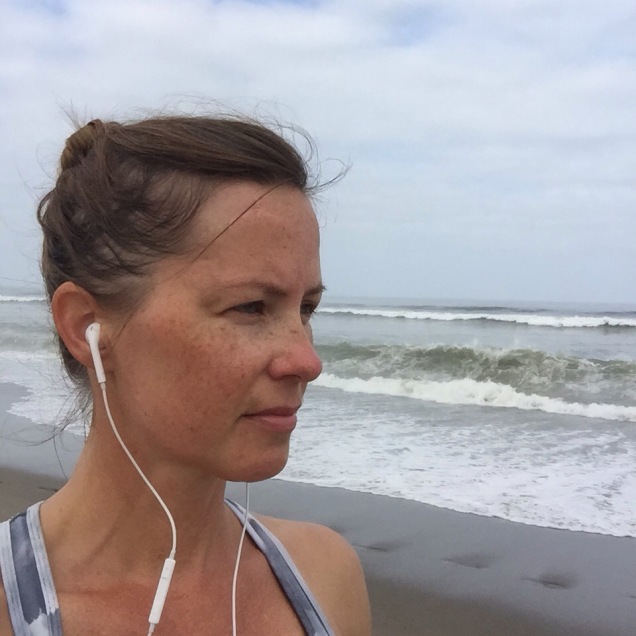 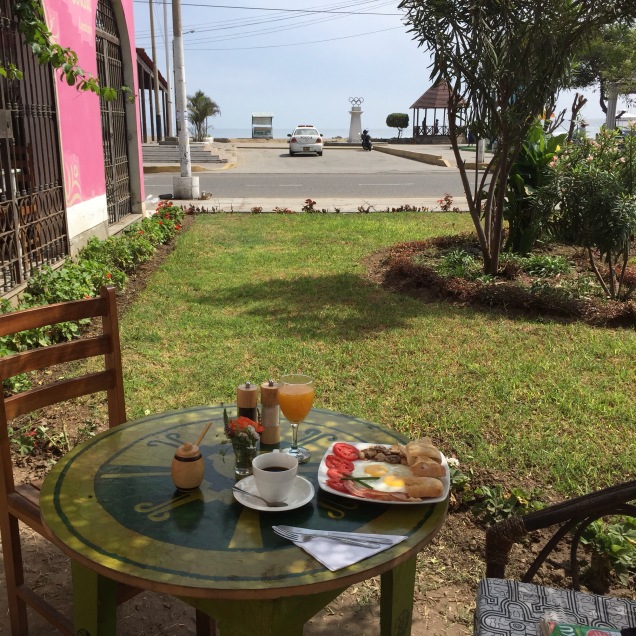 On my last evening, I ate dinner at a cheap local dive that happened to have a remarkable sunset. I was waiting for my change when a woman and her brother coaxed me over to their table for conversation and dancing, never mind that my inadequate Spanish skills suffered even further by listening to their severely slurred drunken babbling. As typical in Peru, my change was taking forever and the next thing I know, I’m dancing with these two in the middle of the restaurant to kill time. I’m not much of a dancer but in their state, neither were they.

I snuck out as soon as it was politely possible and turned in for my last night at Casa Fresh.  I relayed the story of the drunken dancing to a girl in my dorm and her reply?  “Oh, that was you?  I thought I saw you when I walked by!”  And this is the trouble with small towns….

One thought on “To Surf or Not to Surf”