The morning we were due to arrive in Santiago I felt strangely ambivalent.  I can’t explain it even now.  Everyone around me was emotional and passionate with feelings of accomplishment and yet, I felt nothing.  What was wrong with me?  I knew I was proud of what we had done.  I knew I was excited to stand in the plaza in front of the cathedral.  But I couldn’t seem to muster the same outpouring of emotion.  In fact, I felt myself already separating from the rest, like I didn’t fit in somehow.

Tony, Jay, Maria, and I had breakfast together in O Pedrouzo, congratulated each other on a quest nearly completed, and set off separately for our last 20 km.  As an introvert, time alone is often a way to recharge my batteries and I thought these last few steps by myself would be what I needed to conjure more passion for my arrival in Santiago.  Instead, I was distracted by the crowds and the cheaters and if I remembered to get a stamp in my Credencial and what time I would stop for my next coffee break.  The forward momentum was so mechanical after 5 weeks that I couldn’t stay focused.  My mind kept drifting to anything and everything unrelated to the Camino.

Just entering the city limits, Tony, who had walked ahead of the rest of us that day, was waiting on a bench so we could all walk in together.  I knew that Maria was behind me, walking with a German boy she had met, and I wasn’t sure where Jay was, but I felt a strong pull to keep walking.  My lack of emotion felt so alien to me that I just wanted to get there and thought that perhaps seeing the cathedral, I could begin to understand the magnitude of my pilgrimage.  I told Tony that I needed to keep walking and he decided to join me.

After a couple of wrong turns, we finally arrived in the large plaza looking up at the pinnacle landmark of the last 5 weeks, la Catedral de Santiago de Compostela.  There was scaffolding blocking the facade and the energy I had hoped for wasn’t there.  It felt completely anticlimactic.  We snapped a few photos and decided to go to the pilgrim’s office to obtain our Compostelas.  The line was short, but this was the first time I had a brief surge of elation.  The man behind the counter asked when I had started, where I had started, and scribbled my name and 775km in the blank designating the distance.  I stared at that piece of paper and I was immensely proud, as if I needed this certificate to somehow remind me. 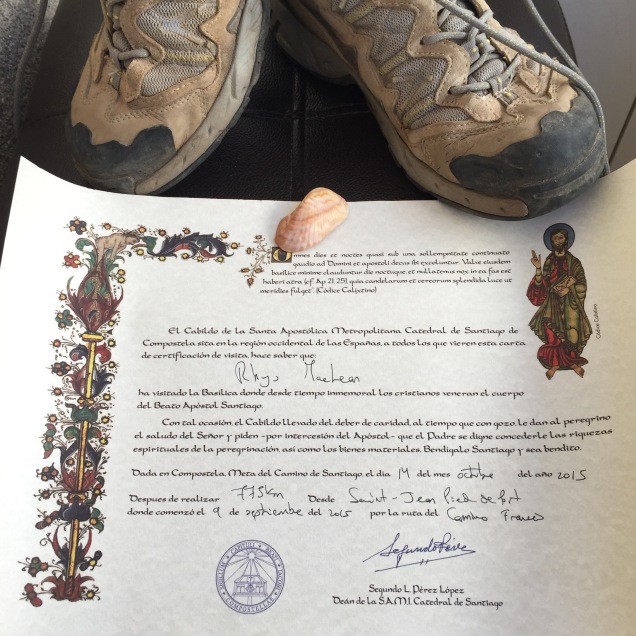 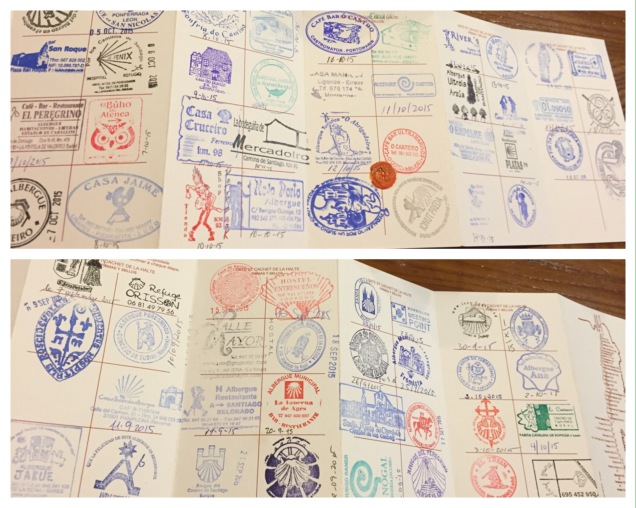 Walking back toward the Cathedral, Tony and I began to see other friends arrive and bumped into old friends that may have arrived in Santiago the day before.  There were even others who we hadn’t seen in weeks, but had already walked to Finesterre and had returned to Santiago before returning home.  I saw Jay, Eithne, Tom, Emile, Paddy, Joe, Kim, Emmy and countless others that I had known briefly or maybe had not known at all, but only recognized from sharing the same path with them for 5 weeks.  Watching the tears and hugging, I knew I did have that satisfaction inside me as well, but I started to realize that I couldn’t release it yet because I wasn’t done. 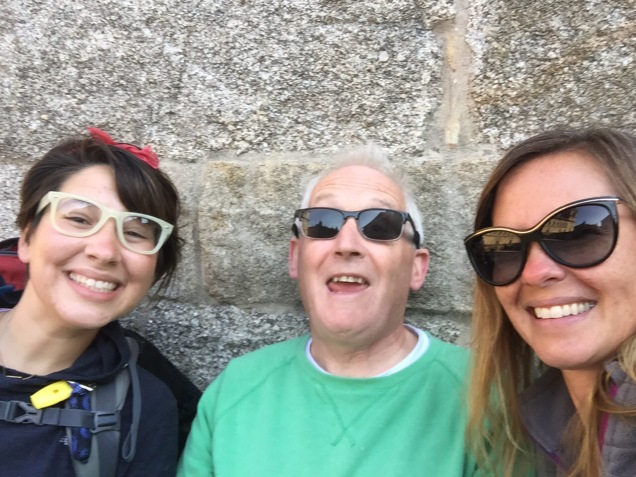 About 3 days after I began walking, I had decided my destination was no longer Santiago.  I wanted….no, I needed to walk to Finesterre, once the edge of the known world.  It was only 88km more to reach the ocean and that felt more final to me than Santiago.  Santiago is the culmination of a centuries-old pilgrimage and is a perfect finale for many pilgrims.  But for me, stopping in Santiago could be likened to running 26 miles of a marathon but not finishing the last 0.2 miles.

I said a tearful goodbye to Maria, who was flying home to find a new job.  I had a final breakfast with Tony and Jay at their hotel and I began walking again, this time alone.  I left before sunrise and watched the golden globe on the horizon illuminate the Cathedral in the distance.  While it was eerie to be on this trail without my Camino family, I felt content that this was where I was supposed to be.  The first day I walked 40km, the longest I had walked in one day, and by the time I dragged into Vilaserio in the evening, I did not feel well at all.  In hindsight, I was probably dehydrated, my routine broken without the familiar crowd. 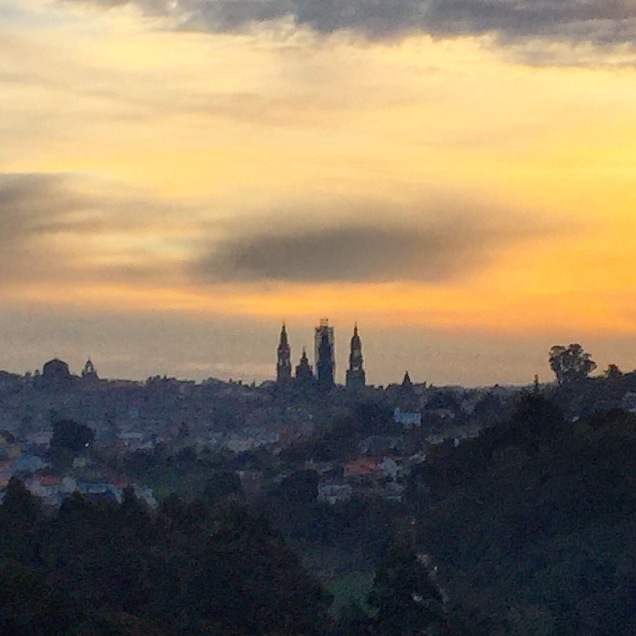 On the morning of the second day, I received a message from Lin, who I had not seen since Burgos, several weeks earlier.  She and Hans, who had also walked on ahead from Burgos, were currently in Finesterre and they had heard that I was on my way.  Lin couldn’t stay, but Hans said that if I were to be arriving the next day, as scheduled, then he would wait for me.  I was still feeling ill that morning.  I ordered orange juice and plain toast for breakfast but I couldn’t finish it.  Logic told me that I shouldn’t walk.  The distance between towns was too far and if I found myself too sick to walk on, I would have a hard time sorting out what to do or where to go.  But knowing that Hans would be there in Finesterre, I wanted to at least try to make it on the third day as planned.  Luckily, it passed after committing to a slow pace and drinking a lot of water. 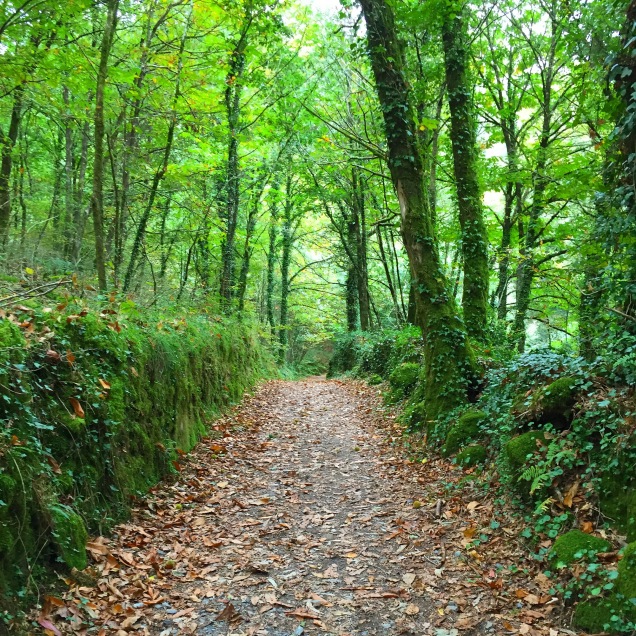 Waking up on the morning of the third day (in reality, it was the 40th day), I was filled with the excitement that had been missing in Santiago.  I put on my hiking shoes and backpack for the last time as a pilgrim.  The path ran through acre upon acre of farmland.  The smell of manure was nearly constant.  And the Camino markers seemed to grow more frequent, if only because I was moving with more anticipation.  I walked over a small hill and took a photo of a marker.   Only afterward did my eyes move to the distant background and focus on the ocean.  I still had about 18km more to walk that day, but I could see the hazy outline of the sea.   It was surreal.  I wasn’t expecting it yet and with tears in my eyes, I fell to my knees. The previous 40 days began to flash through my mind, every ache, every landscape, every friendship, every step.  I practically ran the rest of the way – it was nearly all downhill. 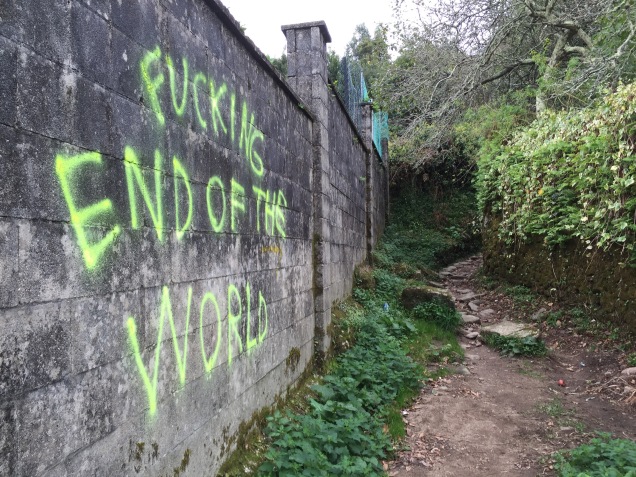 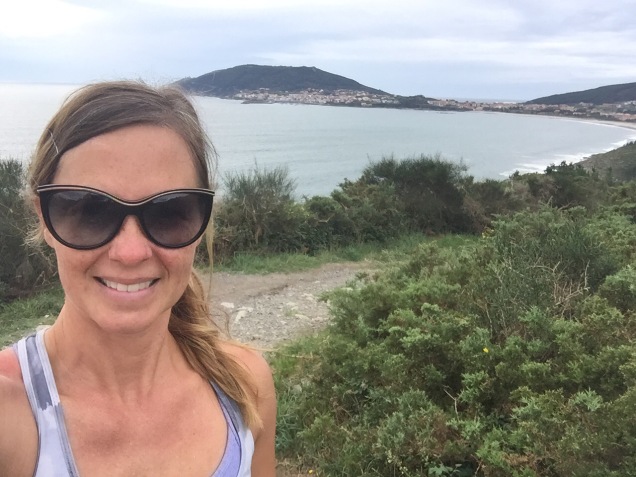 With the outskirts of Finesterre upon me, I was walking through a wooded beach when I see a figure moving toward me in a familiar blue t-shirt.  I knew immediately who it was – Hans had started walking along the path to pick me up.  It was a remarkable surprise.  Hans offered to carry my pack for me, but I refused.  It was my burden to carry until the end.  He had reserved a bunk for me in a decent albergue and had prepared a feast of meatball soup, cheese, chorizo, bread and 5 bottles of wine.  YES, I said FIVE!  I showered, dropped off my things, and together, we walked the last 3 km to Cabo Fisterra, the lighthouse located on the peninsula at the westernmost point of Spain, to watch the sunset.

The steps at the lighthouse were scattered with pilgrims and tourists alike.  Joe and Kim, from Australia, and a couple other familiar faces were also there, which was a happy reunion.  I sat on the rocky coast, drinking red wine out of a Dixie cup, with good friends, watching the sunset over the Atlantic Ocean. 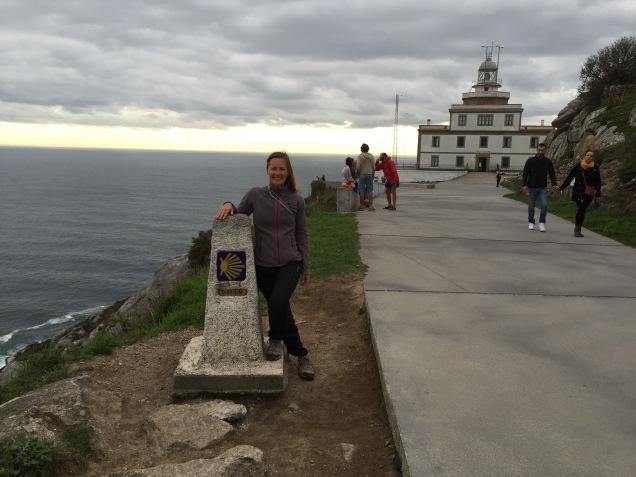 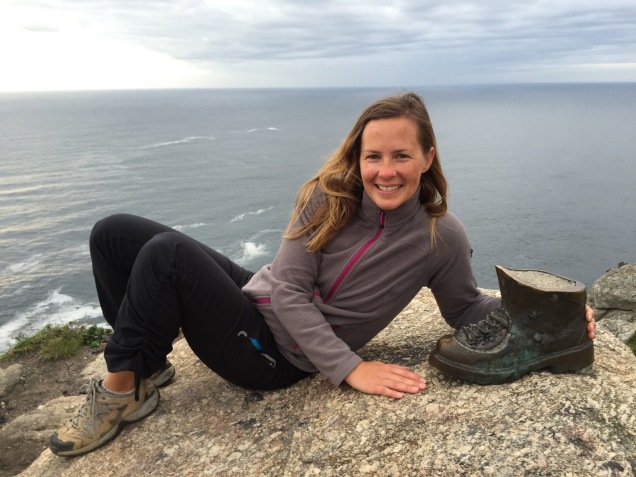 Now this chapter was complete and I wouldn’t have wanted to finish it any other way.

2 thoughts on “The Lighthouse”