Thirteen hours and 6700 miles later, I look out the window of the 777 to see a smoggy sunrise over my fourth continent. Even in the jetway, the heat of Bangkok enveloped me and it was time to remove some layers.  The last time I had felt such heat I was in Cartagena, Colombia, 3 continents and another lifetime ago. 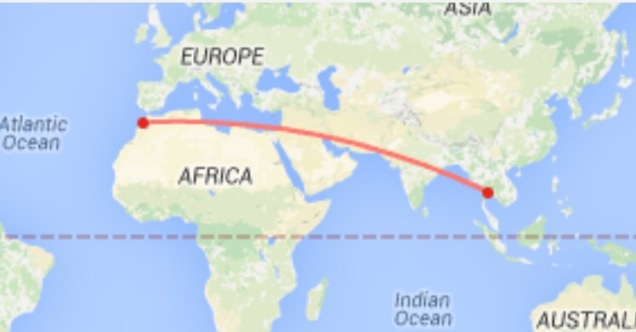 Standing in the queue at immigration, I met a lovely Austrian couple who were just beginning a 3 month journey and so it begins….another part of the world and another collection of brand new friends.  The three of us braved public transportation from the airport to save a few bucks on a taxi.  Bangkok was not at all what I expected.  From what I had heard, I was anticipating chaos and poverty and uncleanliness.  It’s true – it was all that, but not as bad as I expected.  Having just come from Morocco and spending 6 months in South America, it was par for the course.  I rather enjoyed Bangkok, the street food, the (sometimes) perfectly flowing no-rules chaotic traffic, the opulent temples. 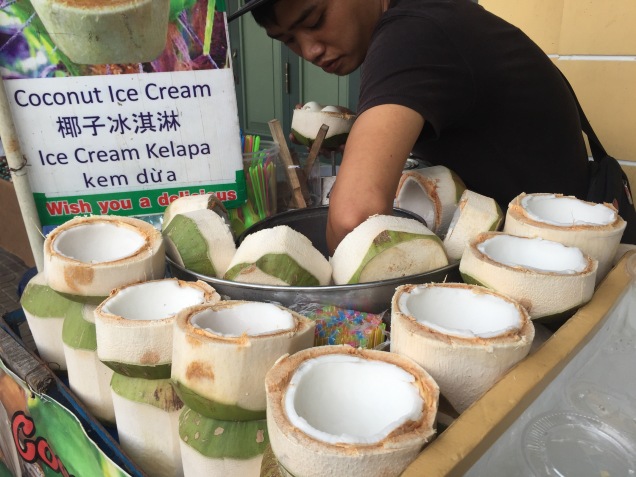 The Austrian couple, Lisa and Stefan, came with me to my hostel where I had a reservation and they had none.  They took one look, said something to each other in German, and then told me they would look for another place.  I assumed it was because they wanted a private room, which this particular hostel did not have.  As it turns out, the hostel was too nice for them – they wanted a more authentic experience.  I understood and for one millisecond I thought maybe I should be seeking out more authentic accommodations as well.  Nah.  Been there, done that.  When I saw my big squishy comforter, memory foam mattress, large clean bathroom, privacy curtains, my own outlet and bed lamp, and A/C, I was quite content with my cushy non-authentic decision.

The Grand Palace in Bangkok is the star attraction.  It was magnificent on the grandest scale.  I hadn’t planned on visiting the Palace when I did so I was not dressed appropriately to enter the temples.  Luckily, they are happy to lend the scantily-dressed foreigners the appropriate attire. Wearing a pale yellow button down shirt and a mismatched floor-length wrap skirt, I was beginning to feel more authentic already.  The crowds were a bit overwhelming at times.  I realized this was the first time since I left home that I had been somewhere during the peak season.  There were Western tourists (usually the underdressed ones), the Americans always wearing sneakers, the Chinese traveling in large tour groups and shouting at each other to take one more selfie.  Oh, the selfie sticks!!  I’m not knocking it entirely – I have one – and I think it has its place at times, like when you don’t want to hand your camera to a stranger to take a photo or perhaps there is no one around to take a photo of you.  But I venture to say that it is WIDELY overused in Asia.  And I’ll stop there before I start stereotyping.  If you’ve ever been to this part of the world, you know what I mean. 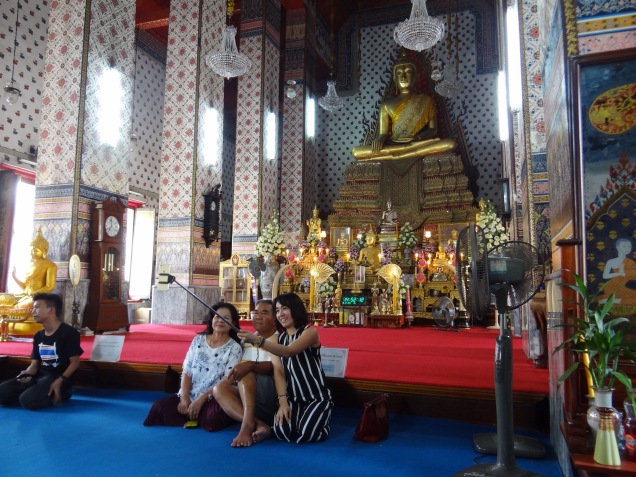 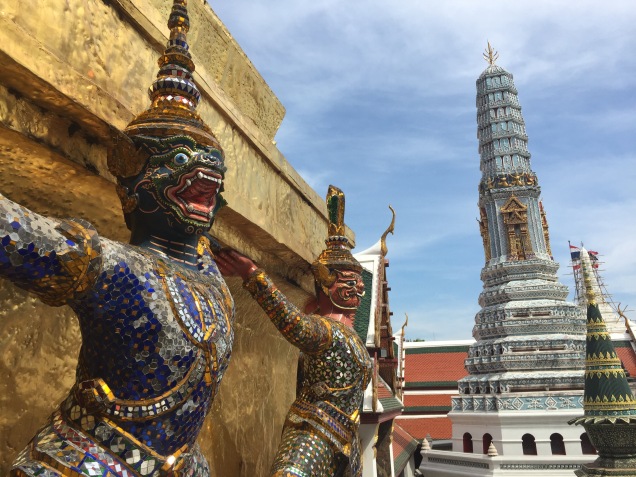 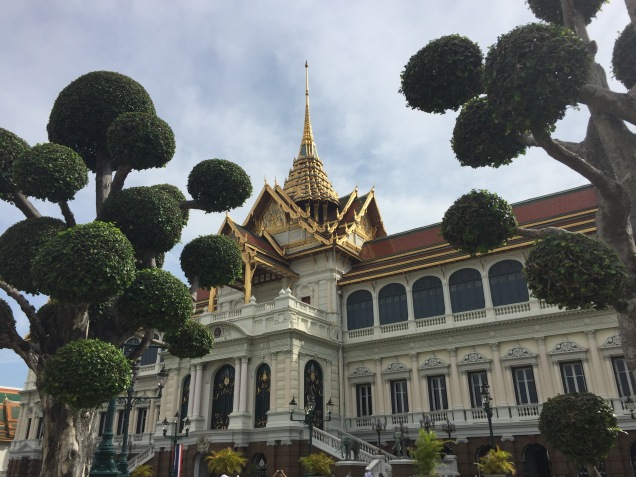 From there, I visited the nearby 16th century Wat Pho, the Reclining Buddha, which is 46 meters long.  It was also grand and impressive with the queue and selfie sticks to go with it.   Still a little tired after my international flight, I thought I would take advantage of a traditional Thai massage.  Near Wat Pho, the massage school was teeming with visitors.  The price was about $11 for a 60 minute massage.  Yes, please!  Little did I know at the time, but this was about twice the price of the going rate for one hour massages.  I was due for several more Thai massages in my future.  The traditional method involves a bit of assisted stretching and a series of pressure points to release any built up tension.  In spite of the fact that we were lined up like sardines and you couldn’t stretch out comfortably without touching the client next to you, it was heavenly. 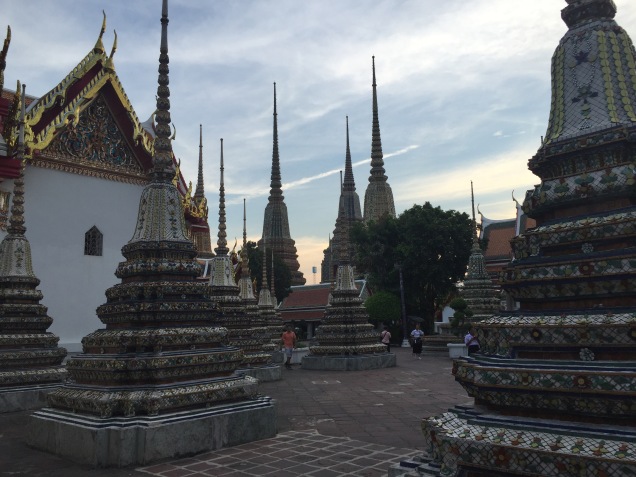 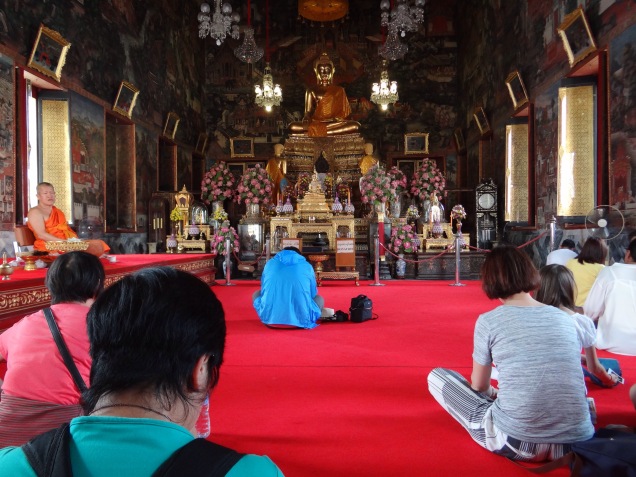 The next day, feeling more rested and more adventurous, I took the ferry across the river to visit yet another temple, Wat Arun.   I was thoroughly impressed with the intricate details of design and the grand scale of architecture.  I thought if each temple was as unique as the last, how could I ever get bored?  The constant, of course, was the selfie stick.

I couldn’t leave Bangkok without the obligatory visit to Khan San Road, the “backpacker” road, a short side street with bad Western food restaurants, delicious cheap street food, cheap Thai massages in recliners right in the street, vendors selling everything from elephant pants to noisemakers to crispy scorpions on a stick, tattoo parlors, competing music blaring from several different bars.  Yes, this entirely encompassed everything a young first-time backpacker might desire.   It was sensory overload and I didn’t completely hate it.  I felt like a backpacker again, even though this wasn’t really my scene.  I stood in the middle of that road and watched a group of rowdy young Germans egging each other on to buy a scorpion snack and it kind of made me smile.  Silly and non-authentic as this scene might be, this is my life and I love it. 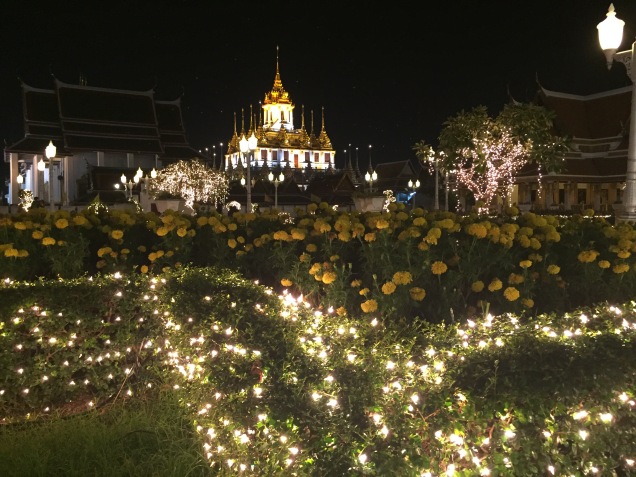