I only knew vaguely about the Cambodian genocide, perhaps only that it happened in the not so distant past and that a lot of people died. I didn’t know how or why or what effect these atrocities may have had on the survivors. I had heard of the movie, The Killing Fields, but I had never seen it. The topic certainly never made dinner conversation in my, admittedly, somewhat privileged life back home.

When I arrived in Phnom Penh, the TV room at the hostel was screening the movie. Already in progress, it was difficult to follow what was going on and it was difficult to become invested in the characters without knowing the beginning. I signed up for a shared Tuktuk tour the following day. We would have the chance to visit the Tuol Sleng Museum of Genocidal Crimes and the scene of the crime itself, the Killing Fields, to learn for ourselves the true nature of these horrible events.

Between 1975-1979,the Khmer Rouge, led by Pol Pot, tortured and murdered more than 25% of its own population in Cambodia.  The Communist government was originally supported by many Western powers due to their opposition of the previous regime, who supported American bombings of North Vietnamese camps.   The Khmer Rouge gained more power, supported by China, and wanted to purge any citizens who disagreed with their agenda, especially educated people.   Pol Pot dreamed of a society that was free of outside influence and modern distractions so he evacuated all of the cities and forced everyone to work in collective farms.  Unfortunately, much of the bounty from the farms was sold to China so disease and starvation were rampant.  Anyone that appeared to be intellectual was a target.  Owning a business or speaking a foreign language or even wearing glasses could be lethal.  Pol Pot was never brought to trial for his crimes and as far as public record shows, only five people were ever brought to justice.

Once a high school, then a prison called S-21, it now stands as the Tuol Sleng Museum.  The building was derelict and the dark shadow of the secrets within loomed in every corner. There was room upon room of photographs of men, women, and children that had all been victims of such tragedy. It was heartbreaking. These rooms were followed by more rooms with more photographs of child soldiers who had been forced to work for the Khmer Rouge. If you stared at any one photograph long enough, you could feel their pain. Rusted beds, instruments of torture, documents of “confession”…it all led to a very depressing afternoon.

Feeling the weight of the past heavy in our thoughts, our Tuktuk continued to the Killing Fields. Down a dusty road just outside of the congested city streets, sat a cemetary for thousands of victims. This particular site is only one of hundreds of other mass graves located throughout Cambodia, some of which have not even been uncovered yet. Collectively, more than 1 million innocent people were murdered. For a nominal fee, I was fitted with an audio guided tour of the site, leaving me to wander at my own pace. Many of the structures that the audio guide introduced were no longer standing, long since torn down and removed as if that might erase the past. There had been Chemical Storage Room and a Truck Stop, where victims were unloaded and processed into holding cells. 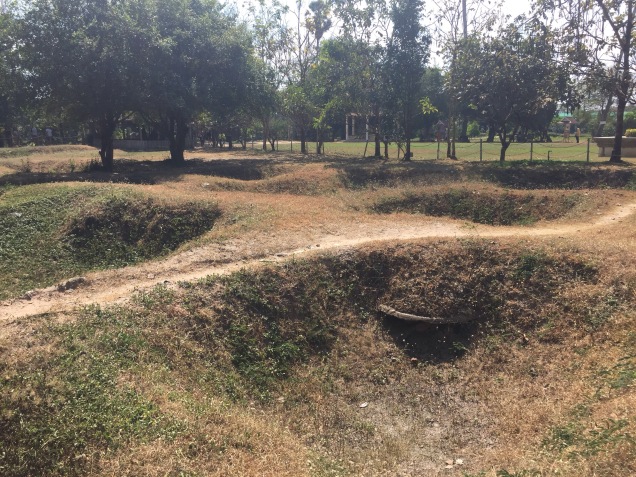 Through the audio guide, stories were told about some of the victims, how they were arrested and why and if they may have attempted an escape or tried to revolt against the regime, stories of fathers and mothers, grandmothers and grandfathers, and children who had been tortured and killed at this very place. Learning about the children was, obviously, the most difficult. A large, solid tree stood in one area with a rather heartbreaking description. Colorful ribbons and trinkets were pinned on the tree and littered the adjacent pit where small bones had been recovered. 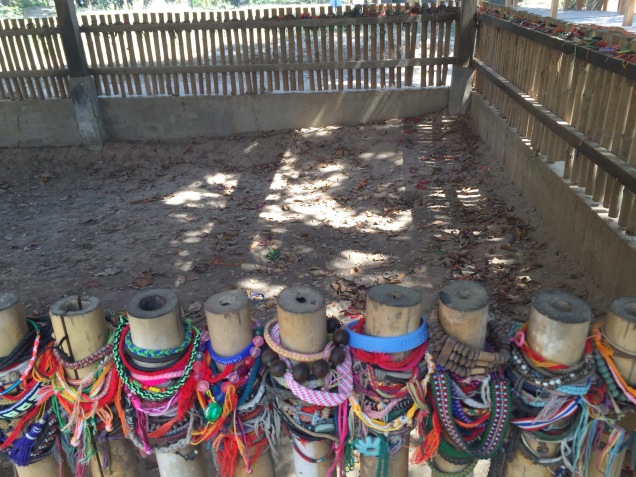 There was a container with pieces of clothing that have been recovered at the site.  Even now, during the rainy season, pieces of clothing are still brought to the surface.  There was a commemorative stupa full of skulls sitting in the center, with little colored stickers depicting the sex of the victim, the age of the victim, and the method of their demise (many were caused by blunt trauma to the head).  Every display was more horrific than the last.

I left the Killing Fields feeling absolutely gutted, what a senseless tragedy in the name of politics. What happened in Cambodia in the 1970s is not entirely unique to history. It’s not even entirely unique to modern times. And no country that has ever struggled for its independence or its democracy is innocent of its own horrible stories. The survivors and the descendants of this tragic chapter in Cambodia’s past, I believe, to be some of the happiest people I have met in my travels. You would never know the nightmares they may have faced or the family members they may have lost. They smile because of their resilience, not in spite of their loss.

Postscript: After visiting Cambodia, I read the book, First They Killed My Father by Loung Ung. It was a rather dark memoir of Loung, who survived the reign of the Khmer Rouge. Written in the perspective of a 5 year old child (her age at the time it all began), it is a telling account of what it was like to lose a parent and then to be separated from the rest of her family at the hands of an abusive government. I highly recommend this memoir if you want to know more about Cambodia’s genocide and the daily struggles of the victims.

One thought on “The Khmer Rouge”