Day 329 – 24 Jan, 2016
Drawn by the Internet photos of a tropical paradise, calm aquamarine waters, coconut palms, white sand, and isolation, I booked a ferry to Koh Rong Samloem. It was everything that I imagined and more. Upon arrival at the pier, I was met by a skinny kid with his jeans rolled up to his knees who led me to a long tail boat that was anchored on the beach. He tossed my backpack across several meters of water to another younger kid that was already on the boat. I removed my shoes and waded out to my island transport.

Koh Rong Samloem has no roads. If you want to travel from one side to the other, you must walk on the beach or through a path cut through the jungle. My chosen bungalow was about a mile down Saracen Bay so I was thankful for the water taxi.

Hostels were available on the island, but they all suffered from terrible reviews and party reputations, which is not what I had in mind. I decided to rent a private bungalow for a quiet respite from my typical backpacker lifestyle. Paradise Villas was run by a kind German man, who lived there with his 3 guard dogs, and it consisted of a series of thatch-roofed bungalows set about 20 meters from the beach in its own sandy garden. It was a simple affair and the bathroom had not been cleaned, but I had grown accustomed to this type of thing and I just wiped down the toilet myself and never even mentioned it to the manager. I was in paradise, after all, and I wasn’t going to let anything bring me down. 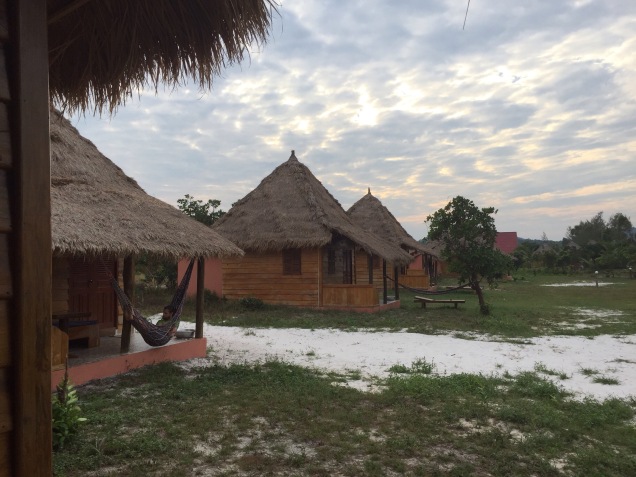 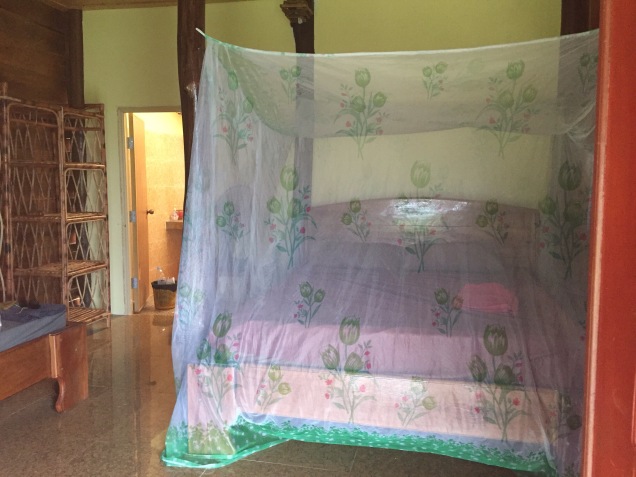 Translucent crabs skittered back and forth on the beach between various holes they had excavated. The water was as clear as glass, yet almost the same color as the sky. I wanted to go for a swim, but it was still morning so, first, I would go for a hike before the mid-day heat swept in. Through a jungle path, over tangled tree roots, and thorny bushes, I climbed up for about an hour. I only saw 2 other people the whole way; the sounds of monkeys and birds were my soundtrack. At the top, there was an understated lighthouse with a handwritten sign, requesting a $1 admission fee. A mangy dog signaled my arrival to his owner who had fallen asleep, watching 80s American music videos on a small box television. The owner waddled over, unlocked the door, and pointed me toward the rusted iron ladder that led up 5 stories for a view over the entire island. 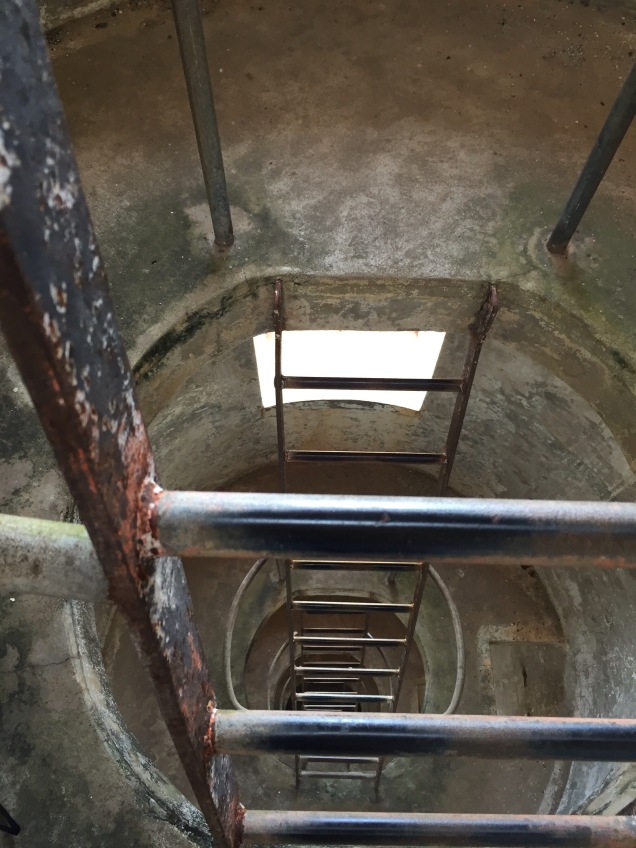 The intensity of the colors was overwhelming – the deep green of the jungle canopy, the rich blue of the sea, and the cloudless azure sky. Not having felt lonely in awhile, I didn’t feel exactly lonely then either, but I did feel like this was a view meant to be shared with someone else. It was too impressive to keep it all to myself, yet I was all alone. Not for the first time, I spoke aloud to myself, “Wow….this is so beautiful. I can’t believe a place like this even exists.” 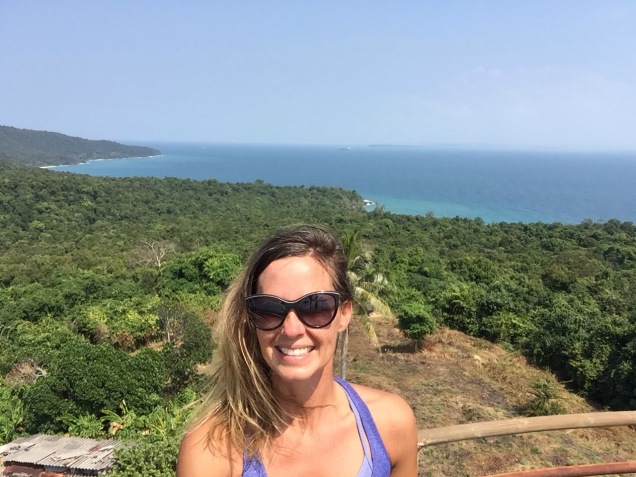 On the walk back from the lighthouse, the mercury was rising and the sea appeared that much more inviting. The water was shallow out to 100m or more from the shore and colorful fish darted out of my path. I spent the afternoon playing in the water in a general laziness kind of way. Several times I thought I should walk around and take some photos but I couldn’t draw myself out of the water. When the sun fell lower in the sky, I retreated to the hammock on my porch for more lazing around. 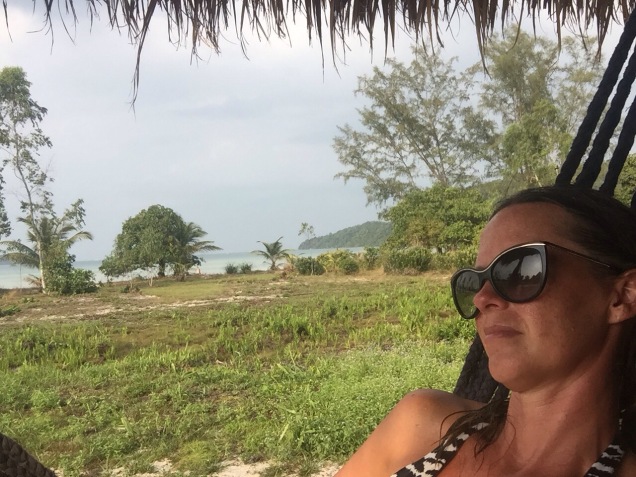 The electricity was only turned on from 6pm to 7am and even then the only source of cooling would be a fan. When I finally retired to bed, I drew the mosquito net and it was noticeably gusting in the breeze. I thought it was only the fan blowing it around, but with walls made out of bamboo, the outside wind was making its presence known as well. The weather outside grew more aggressive. A tropical rain soaked us for about 30 minutes and the wind threatened to dislodge my roof. I lay awake for hours, watching the silhouettes of geckos dancing on the wall, but unable to hear their movements over the roaring storm outside.
The next morning, gone were the calm inviting waters. The sky was gray. The wind still held sustainable gusts so that the air temperature felt almost chilly at times. I snuggled up on a reclining cushion in the open air restaurant and hoped that the winds would subside. I was deeply regretting not taking many photos the day before. Sadly, the wind had stirred up the sediment from the bottom of the bay, turning the water a murky color, and even more distressing, it had also washed loads of plastic up on to the beach. Loads of plastic bottles, plastic bags, fishing nets, and other unrecognizable trash cluttered the previously pristine beach. 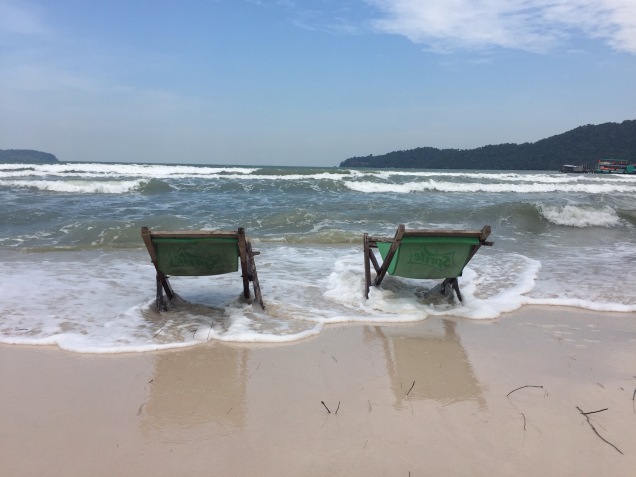 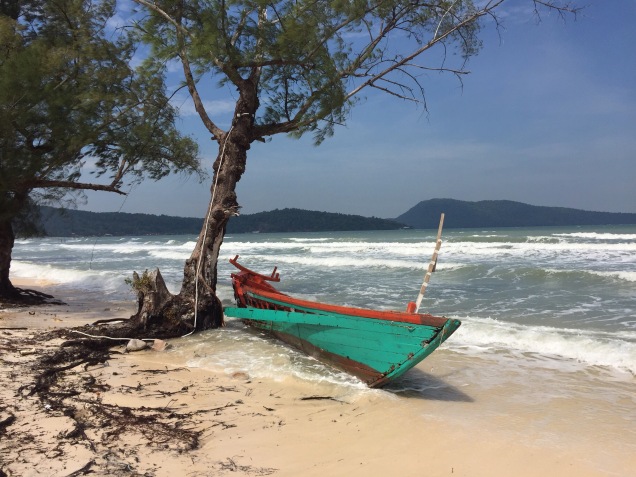 In an effort to kill time, I collected some trash in my own private waste basket, but then not knowing what else to do with it, I left it in my bungalow so it probably went right back into the ocean after I left. Thinking that the weather conditions may be different on the other side of the island, I took a 30 minute hike to Lazy Beach through the sandy jungle floor. The sea was slightly calmer, but it was high tide and the beach had all but disappeared so five minutes after I arrived, I made the return trip. 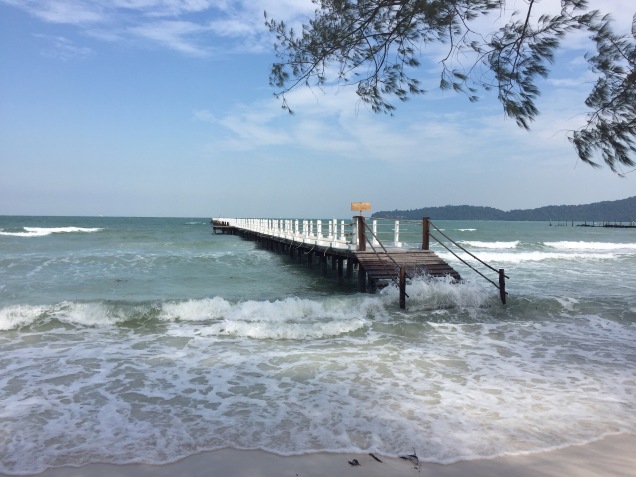 I found Koh Rong Samloem to be an undiscovered paradise, if it’s possible that even exists anymore. My timing was unfortunate with the weather, but it ranks in my top 3 favorite beaches I have visited on this journey and I would definitely return, perhaps with company next time.
When I set foot back on the mainland and once again had the luxury of a temperamental wifi connection, I posted a photo on Instagram of the unmatched view from the top of the lighthouse. Over the last few weeks, I had exchanged sporadic emails with Martyn, whom I had met in Morocco. Martyn commented on my photo and I gave him a bold response, thus opening the door to a whole new chapter of my journey. 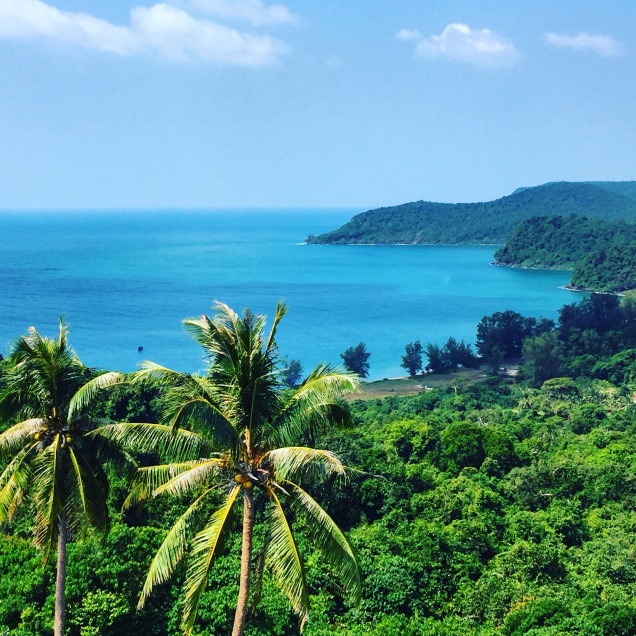 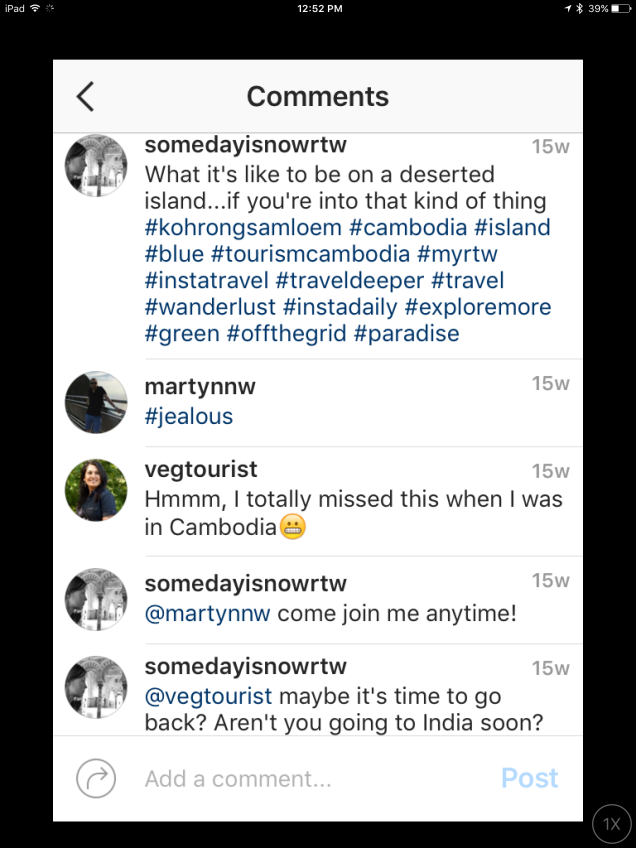