“Yep!,” I shouted, as I closed my eyes and we pulled onto the highway for the first time. Our caravan consisted of one, two, three, four…..five motorbikes, zipping past smoking food shacks and hotel vacancy signs. While not my first time on the back of a bike, it was my first time in Asia and our group of 7 nomads were in search of a secluded beach we could claim as our own for the day.

Phu Quoc is a long, relatively skinny island that belongs to Vietnam, but is more off the coast of Cambodia. Long Beach, aptly named, is the most central and populated stretch of sand, but with a little initiative and some wheels, you can escape the crowds. Aaron, Dino, Celine, Leon, Steve, Chris, and I found a stretch that seemed perfect at first, but upon closer inspection, it was the same as so many of the other beaches I had encountered so far – it was littered with garbage.
There was a guarded warehouse opposite our position, which we convinced ourselves was used to run some kind of illegal activity. Unfortunately, it seemed we had not found the paradise we were looking for, but I was loving the freedom we embraced on the bikes so it was a welcome suggestion to keep searching. At the far southern side of the island, we finally found a white sand beach with calm aquamarine waters.

Always the introvert, it was now that I began to reflect on how I had ended up with such a large group of friends the very first night I arrived in Vietnam. While most other travelers are usually quite a bit younger than me, I tend to prefer reading or writing to big social groups and heavy drinking. This particular group had been one of almost 20 travelers, mostly solo, that had been together for several days before I joined. Instead of feeling like an outsider, intentional or not, I was instantly brought into the fold. They were from all over – England, Norway, Belgium, Ireland, Italy, Holland, Germany, USA – and because they were mostly traveling alone like me, it was easy to find common ground.
The whole lot of us went snorkeling my first day on the island. I still laugh when the tour operator showed up to tell him our group had grown from 8 people to 18. As any industrious Southeast Asian tour operator would do, he crammed us all into the van, sitting, standing or crouching. Boat capacity? Never mind that, only a technicality. Where there is a will, there is a way, you know! We were detained for a 45 minute interval by the police, no doubt because we were using an unlicensed tour or because bodies were overflowing from the van, but our guide patiently negotiated with the authorities until we were finally permitted to leave. Ultimately, for $9, we got to try our hand at squid fishing (no one succeeded), snorkeling with loads of garbage and plastic bags (that uncannily look like jelly fish underwater), and had a smorgasbord of a lunch on deck (I even tried sea urchin!).

After a lively group dinner, most of the group was departing the next morning to each go their separate ways. For those of us remaining, we strapped on our helmets for a wild ride down the coast. Reluctant to drive one myself, I rode with Chris. He had been living in Boulder, working for an architecture firm, but as his trip was drawing to a close, he had plans to move back home to Boise and start his own firm. I liked Chris. He had a dry wit about him and we seemed to have a lot in common and what’s more, I instinctively trusted that he wouldn’t kill me on the bike. Celine rode with Dino and our biker gang was created. It was one of those days where I truly felt like I was traveling, wind blowing in my hair, not really caring if we got lost (almost hoping we would, but of course, we didn’t because of Chris’s exceptional navigation skills). It was magic. Until….someone did get lost and a slight heat stroke/dehydration situation ensued (but that isn’t my story to tell). In the end, everyone returned and we were closer friends for it.

As a couple of more days passed and I kept extending my stay on Phu Quoc, other friends were moving on. Celine left first, going home to Norway. Then Dino went, driving his motorbike back to Saigon. Leon next, going home to England with the darkest tan any Englishman has ever seen, and Steve, continuing his travels elsewhere. Only Chris and Aaron and I were left. Aaron, an artist from England with a wicked, sometime self-deprecating, sense of humor, had endless stories of debauchery and drunkenness that kept us laughing for hours.
On our last day, we rented bikes again and drove to the northern part of the island. Again we found a secluded beach that was partly idyllic and partly laden with broken glass and plastic bottles. Leaving this beach, I would be forging north through Vietnam, where I was told that the temperatures were drastically cooler. I didn’t feel ready for that or to say goodbye to my friends, but it’s part of this lifestyle, for better or worse. All I could do was enjoy our last ride as a solid trio, taking helmet selfies along the way. 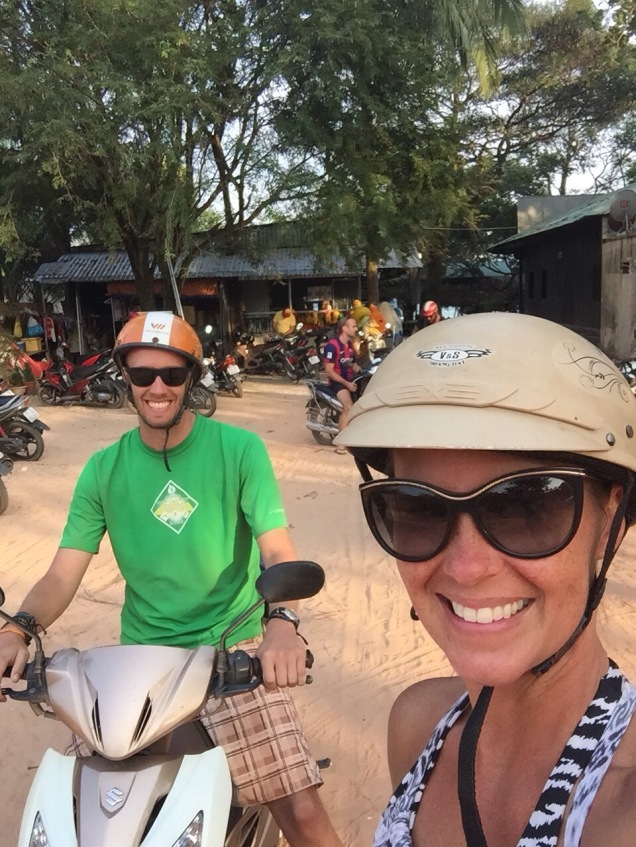 That night, I watched my final sunset on Long Beach. I was leaving back to the mainland before the insanity of Tet ensued; Chris and Aaron would be there a few more days. Chris and I were sharing a beach chair, while Aaron regaled us with more stories well past last light. With his arm around my waist, I rested my head on Chris’s shoulder and silently said goodbye to him and to the island.

A text message illuminated my phone. It was from Martyn. “Can I really come see you?” Feeling excited about this new  development, I barely noticed when Long Beach faded away and my mototaxi darted through the rain to connect me with my ferry back to the mainland.