The scrawny beady-eyed Vietnamese guide roared with laughter as Stephie and I tried not to gag after what we had just eaten. It had been a gray salty mush pulled straight off the stove at a local person’s home. The remaining members of our group had declined and I felt that would be rude. He told us it was only ginger (which I don’t particularly care for either), but I thought no harm could come from a taste with the intention of being polite in this local home. It was most certainly not ginger.

The guide wiggled his nose trying to imitate the animal that was on our forks, although through fits of laughter, it took him several minutes to tell us we had eaten rat. I still seethe with anger when I think about what a jerk that guy was. 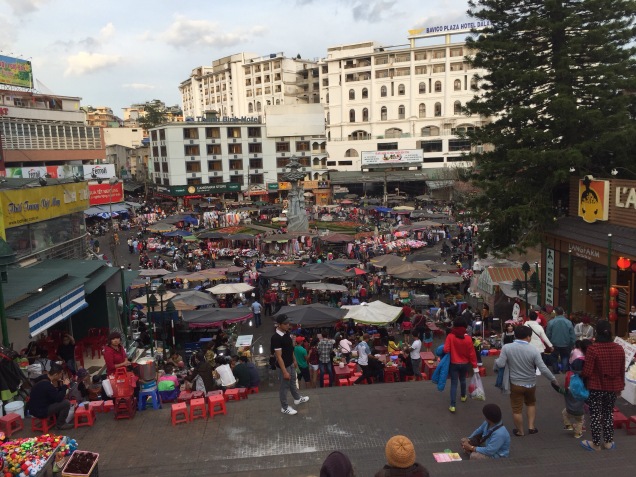 Da Lat was a ghost town when I arrived on New Year’s Day. The only place that was open for dinner was a pizza place and it was bursting at the seams trying to accommodate all of us that didn’t have a big family dinner to tend to. The next morning it was clear the holiday week was in full swing. Businesses were closed, but families were patrolling the outdoor market and having picnics and boating in the large lake in the center of town. Without a plan, I walked around the lake, taking in the French architecture and the Flower Garden Park on the way. I rode the cable car to Truc Lam Temple and the local crowds were overwhelming. Everyone said that Da Lat is beautiful, but the countryside is where the real secrets lie.

Unable to secure a bus ticket earlier from Saigon during Tet, I was soon joined by Stephie and we booked a motorbike tour to see some of the charms off the beaten path. I had known Stephie for a few weeks now. She had an adventurous spirit, was always willing to try something new, and often went out of her way to interact with the locals. What’s more, we seemed to have similar travel styles so she was an easy companion to have along.

Through my guesthouse, we booked “The Secret Tour,” promising non-touristy stops and authentic Vietnamese country life. While we rode as passengers on respective motorbikes, we were accompanied by a van with five more willing participants. Our first few stops were loaded with tourists and we guessed that the claims of “non-tourist” sites had just been a clever marketing ploy. We went to a cricket factory where these insects are turned into crunchy snacks, a coffee plantation, a waterfall, a market to sample local food, and a viewpoint. All of these were interesting stops, but clearly set up for tourists.


It wasn’t until after lunch when our guide lowered his voice and said that the secrets were about to begin. He told us the tour he provides is actually illegal. The Vietnamese government doesn’t like tourists interacting with the local villagers because they were afraid Westerners may stir them to revolt. These local villagers are technically Vietnamese, yet they don’t speak the language and don’t associate themselves with the country in any way. Our guide had been born into and adopted from one of these families so he speaks the local dialect. He asked us to refrain from photographs and not to post about our experience on the Internet….he probably shouldn’t have tricked me into eating rat. If I could remember his name, I would post that too. 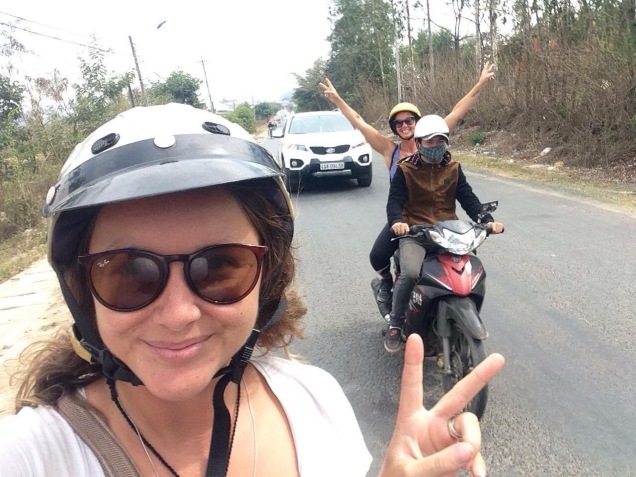 We began when he was literally knocking on the doors of strangers. Quite suddenly, it was clear that these innocent people were not expecting us like at a typical tourist hot spot. A black-toothed woman saw us approach from her squatting position and was not happy about our presence. Our group represented nationalities from USA, England, Ireland, and Singapore. She saw four white faces and three white-skinned Asian faces and, in a defensive posture, she was yelling at our guide to go away. She assumed that the white faces were all Americans (because we looked like Americans she had see on TV once) and the Asian faces were “city people” from Vietnam. She demanded to know what she had done wrong that he would bring Americans here to destroy her village and steal her possessions. We were six women and one man.

I was extremely uncomfortable and I wanted to apologize to her for whatever may have happened in the past, but I kept silent and fell to the back. I wanted to go. Our guide was persistent. It took several minutes, but eventually she calmed down when he told her that none of us were Americans. Then he tried to coax her to invite us inside her home, which resembled a shack not fit for animals. She balked because she said it wasn’t tidy inside. Again, he was relentless. The whole scene was unfolding in such a strange way that I was captivated and appalled at the same time.

When the eight of us were inside, the woman was pulling a bench from outside and milk crates and random objects as seats. She squatted in the doorway because there wasn’t enough room for her as well. The prior argument must have been observed by nosy neighbors because no sooner did we sit down when other toothless and sun-weathered faces began popping up in the doorway and windows. Everyone was curious why we were there, including us. The guide asked her questions about their daily activities, where she sleeps, where she cooks, what she cooks, etc. This is how I ended up with rat on my fork.

For me, it went downhill from there. Stephie always made the effort to speak to locals in their language, even if it was only the basics, so when our trusty guide began giving her phrases to repeat, she did her best to imitate his speech. Some of the phrases he fed her were, “I want to kill you,” “I want to steal your baby,” and as a reply to “hello,” he coached her to say, “fuck you.” Everyone laughed; they knew it was supposed to be a joke. But I had hit my limit. This was inappropriate and not the impression I wanted to leave with these people who so rarely see foreign faces.

Before we left, we were invited into another home to watch the women weave in the traditional style. I tried to set the guide’s actions apart and appreciate what the women wanted to share with us, but I was already writing this post in my head. He should not be allowed to conduct tours, especially in that region. He had soured an otherwise lovely afternoon.
Stephie and I stubbornly rode back to Da Lat on the motorbikes, although the sun was setting and the temperatures were dropping rapidly. With the wind in my hair, riding on the bike had been the most carefree part of the whole day and I was optimistic that it would blow the bad vibes away.

3 thoughts on “The Secret Tour”