Day 353 – 17 February, 2016
I had no doubt that upon leaving Hoi An I would take the train to Hue even though everyone said that was a terrible idea. It would take twice as long as the bus, they said. It was dirty and smelly and loud, they said. I had taken only one other train in Asia so far and yes, it took ages longer than it should have, but this train journey through the Hai Van Pass was consistently listed as one of the most scenic in the world so, in my opinion, it really didn’t matter how long it would take.

I convinced Stephie to join me and together, we were shuttled to Da Nang to board our train. The train station was packed with families heading home after Tet. They carried everything but the kitchen sink in their luggage and almost every family had a screaming baby in tow. Some announcements were made in Vietnamese over the loud speaker and everyone began shuffling toward the door so Stephie and I did the same. A security guard approached us and instructed us to sit back down. It wasn’t our train. 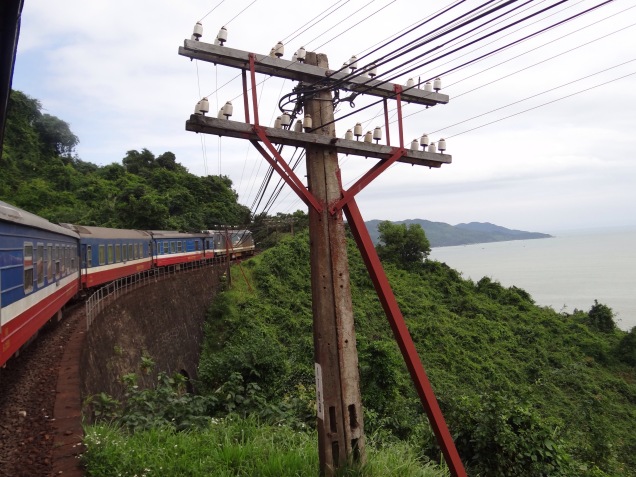 After everyone had cleared out and only one or two solo local travelers remained, we asked a different security guard if we still needed to wait. Yes, our train wasn’t there yet. After some typical Southeast Asian confusion as to what was going on, we were finally escorted to our train. It didn’t look so bad, but it was dead empty. Not another soul boarded with us and it was to our astonishment, that the train was still going to continue to run with only two passengers. We found our car and settled in. There was no air conditioning, but the seats were comfortable and the windows were down. One of the attendants offered for us to sit in the first class cabin since the air conditioning was not working in our car. I knew that the nice view would be on the right hand side of the train and the first class cabins were all on the left, but we thought it was a nice gesture so we carted our luggage to our new seats until we were told we would have to pay extra for first class. It was a female attendant that was doing the talking and she had three male companions that were telling her what to say and they all laughed every time they fed her a new line. It was clear that whatever money they could milk out of us would be going straight into their pockets. It was an exorbitant offer and we refused, relegated back to our second class coach. Once the train got moving, the cool north Vietnamese breeze filled the car and we were free to spread out since we were the only passengers. 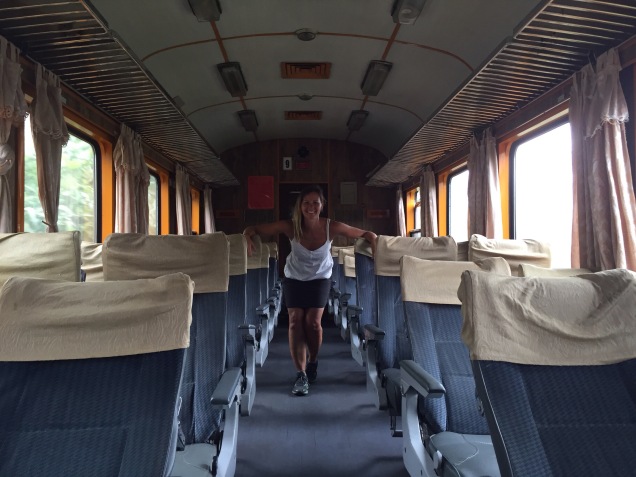 The scenery didn’t fail to disappoint. The sea cliffs and crashing waves were stunning. It’s true the train would stop mid-way between stations for inexplicable prolonged delays and perhaps if we had been packed shoulder to shoulder with other travelers in a steamy coach, it wouldn’t have been pleasant at all. But as it happens, we were the only stubborn souls that wanted to see the Vietnamese coastline by train and we were rewarded nicely.

Unfortunately, when we finally arrived in Hue, our experience went a bit downhill. Neither Stephie or I were keen on our accommodations, a cramped crowded dorm room and a cold water shower. So far Stephie had not been fond of Vietnam and her patience was growing thin with being ignored and lied to, which were common behaviors we had both experienced in our interactions with the locals. It didn’t bother me as much as it bothered her, probably because it had not directly affected me yet, although I was pretty burnt out for other reasons, having loads of technology problems and was generally in a bad mood. Between the two of us, our negativity was palpable and we were only making it worse for the other. 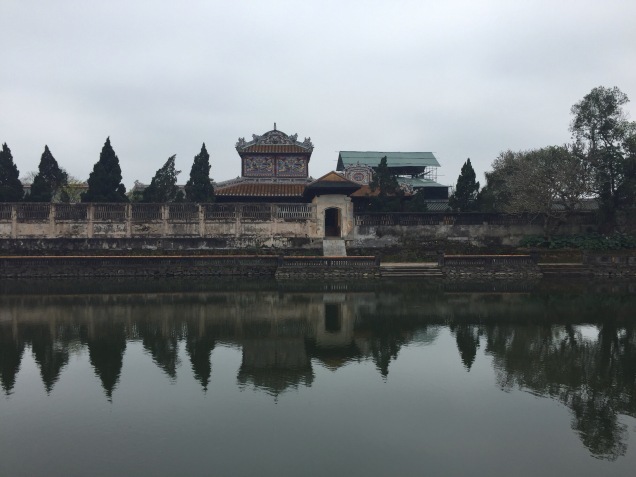 Stephie hit the road as soon as reasonably possible even though we would reunite again the next day, while I forced myself to see some of the sights. In fairness to Hue, it is not a bad place to visit and does have some special landmarks that are worth a look. I went to The Citadel, a walled fortress that was the former imperial capital of Vietnam, and rode a bicycle out to the countryside to visit one of the many famous tombs, but my perception was clouded. I was bored with all of it. The architecture was not unique. The monuments all kind of looked the same. There was always a haze of selfie stick-wielding Chinese tourists. I struggled to get excited about Hue. All of the elements that I loved about Vietnam were there, but I was desperately burnt out. The harder I tried to force the momentum, the more indifferent I became. My internal battle was between depression at what I perceived as “wasting my time” by not enjoying the sights and anger that this feeling wasn’t something I could just snap out of. Hue was merely a victim of my poor attitude and I didn’t give it a fair chance.

By this time, I was sometimes spending hours at a time chatting with Martyn online. He was patient when I complained about my multitude of tech issues and tried to help.  He tried to sympathize with my travel burnout, while he was at work, sitting behind a desk back home in Nottingham.  He tolerated my general grumpiness and still wanted to chat with me afterward.  When we began making plans to rendezvous in Malaysia, I knew this connection that we had could go one of two ways.  And when I reflect on the circumstances surrounding my bad attitude, I consider myself lucky that everyday we were growing closer rather than farther apart.