When I made the decision to go back to Thailand for the second time, it was mainly so that I could go to Pai. Pai is infamously known as a laid back hippie town, home of spiritual wanderers in the extreme north of the country. I didn’t know anything other than that. Other travelers raved about it, but when I asked, “yeah, but what do people do in Pai?,” the question often went unanswered. No matter, I wanted to see for myself. If there was nothing to actually do, I was definitely due for a rest anyway.

I had a short 2-night reprieve in Chiang Rai to see the White Temple, which was gorgeous by the way, and to finally get some proper medicine for my lingering cough. 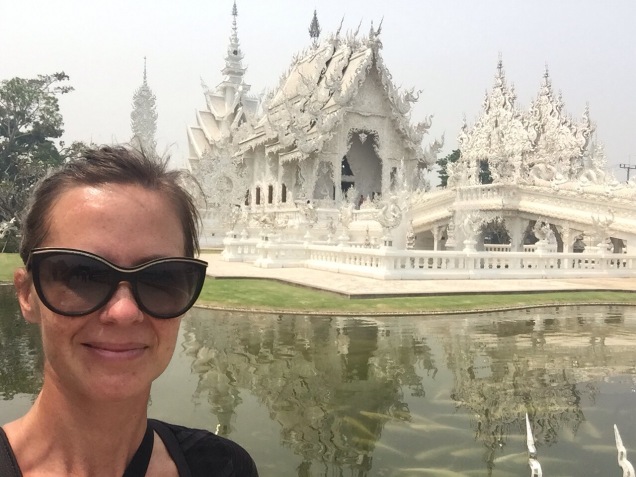 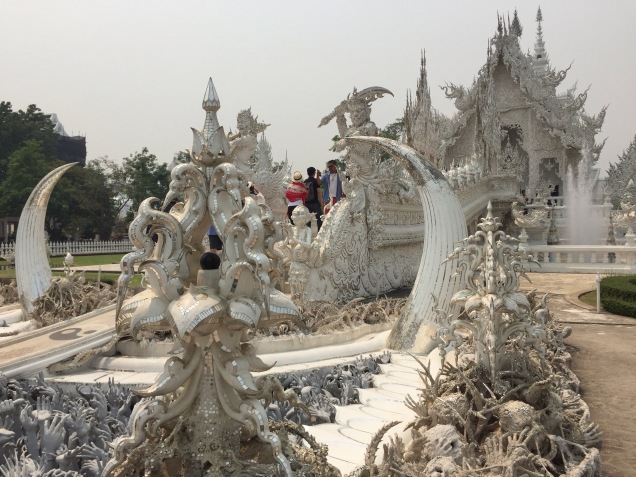 Then I boarded my 100th bus (really, 100 buses!) to Chiang Mai, where I transferred to a cramped minivan to continue on to Pai. This drive annoyingly boasts 762 turns between Chiang Mai and Pai as an ominous warning that if you’re subject to motion sickness, passengers beware. I say annoyingly as it insinuates that there is no other route with more turns than this one. There are others worse than this one, I assure you. With that said, I don’t usually fall victim to the curves in the road so I wasn’t worried. I balanced my iPad on my knees and turned on a movie until about an hour into the drive, when an overwhelming sense of nausea kicked me in the gut. There were eight passengers in the van and everyone was looking rather green. I had willfully been ignoring the twisty road up to that point, but the whole lot of us were sloshing from one side of the van to the other (no seat belts, of course). It was approximately three hours of aggressive stomach-turning bends, anxiety of our luggage becoming separated from the roof, and desperate hope that we would arrive in one piece. 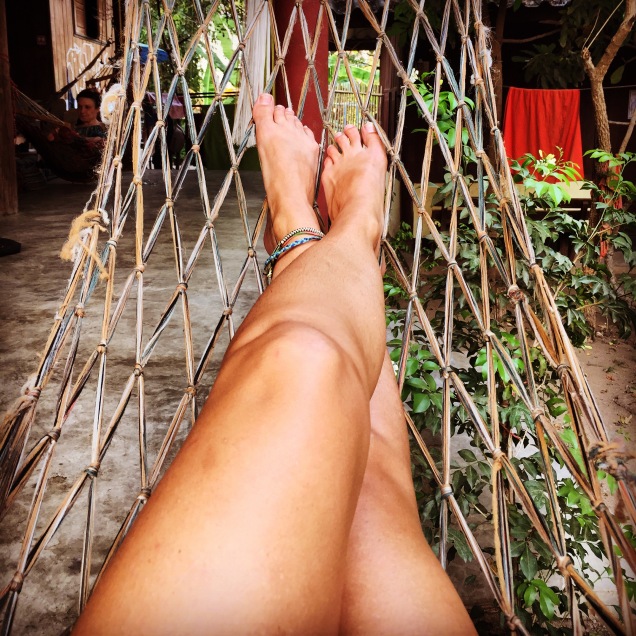 We did arrive in one piece, but it was on no effort of the driver, I might add, who outmaneuvered a number of other drivers in the process. Pai was super relaxed and I suddenly understood the meaning of “chill vibe.” There was a vibrant night market with loads of street food and other Thai kitsch that I had seen before, but one thing was different than other places in Thailand. Many of the shops and night market kiosks were run by foreigners, Europeans and Canadians, probably a few Americans too, who had once been backpackers, but then were sucked into the vortex of Pai and never left. There were no Thai hippies here, only barefoot western hippies with dreadlocks and body odor that were in no rush to get back home. Not all bad, there’s no better breakfast than a western breakfast, prepared by a western chef, when you’ve only seen traditional noodle breakfasts for the last couple months. But I suppose if there was a negative to this scenario, it was that the true authentic Pai was buried somewhere under the layers of eggs Benedict and circus classes (yes, a real thing!) and couture jewelry made by someone with a name like Jennifer. 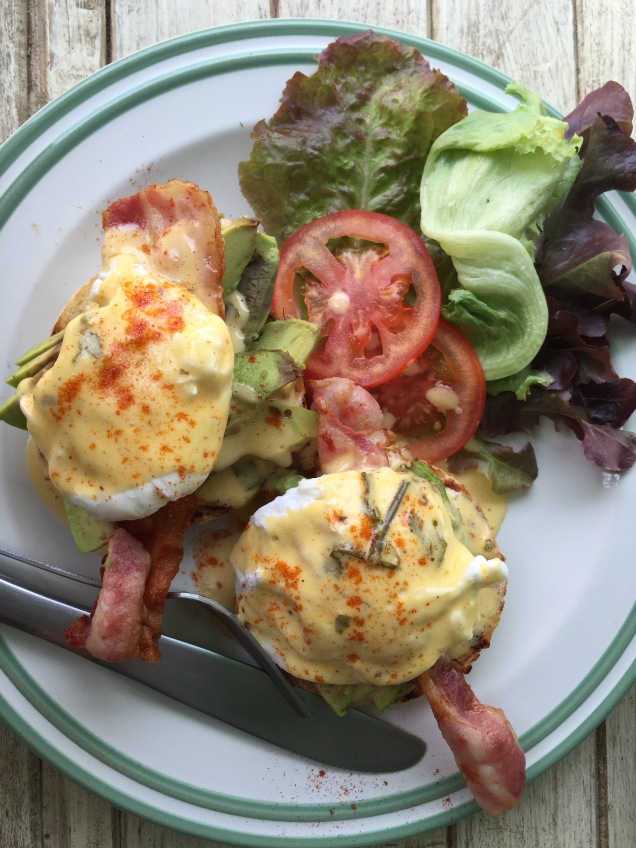 So what is there to do in Pai? Well, you can go to a yoga class, get a massage or other spa treatment…. or circus class. There is a night market every night. To summarize, there isn’t a lot to do in Pai. To really see it, you have to get out of the town itself and visit the countryside. Admittedly, I still didn’t have enough nerve to rent my own motorbike and I was somewhat reluctant to venture too far if we haven’t already forgotten about those windy roads so I narrowed my excursions down to one site* – Pai Canyon. Pai Canyon is a natural wonder not far from the city center. I signed up for a standard sunset tour so that I could share the cost with other passengers. Ironically, no one else signed up so I rode by myself with a weathered Thai soul in his beat up sedan a few kilometers out of town. He parked in a crowded parking lot and told me that he would wait for me there, sending me on alone. Pai Canyon was very nice, yes.  The golden ravine proved that it was worth the visit. Deep crevasses lined with sparse trees were the landscape. It was indeed beautiful. Every vantage point offered another spectacular view, apart from the group who stripped naked for an “artistic” photo. I watched a multi-colored sunset hit the horizon before I found my driver fast asleep in the car. 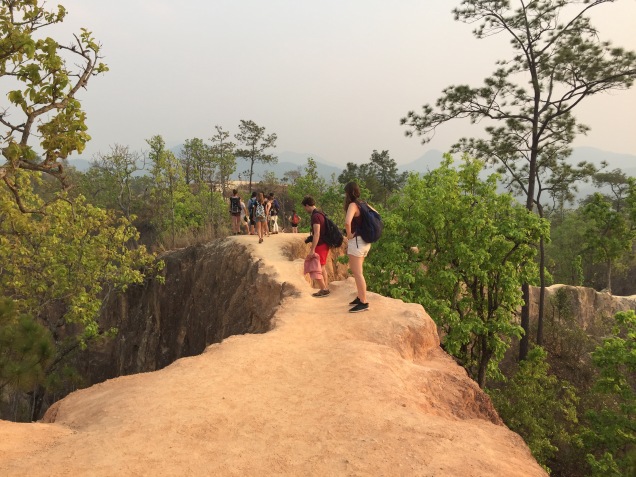 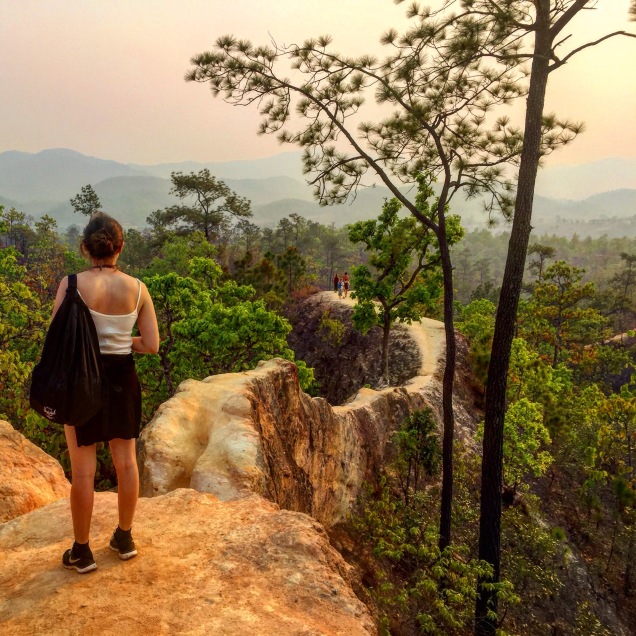 Also worth noting, I did take advantage of one of the many spas. I had brought a cache of razors from home so many months ago and they had recently run out while I was in Laos. I bought a single plastic disposable razor when in Vang Vieng and proceeded to royally hack up my legs in one use. Considering I was only days away from being back on the Thai island circuit, I thought this was as good a time as any to give waxing a go. While I wasn’t entirely new to waxing, never have I had my legs or underarms tended to so I have nothing in which to compare this arguably tortuous experience. The wax was way too hot, leaving a few blisters and lines that resembled sunburn. Every time I winced, the lady wielding the strips would cackle. What’s more, the room was thick with mosquitoes so there was another lady carrying a tennis racket that had been rigged with electrical wire. She would sweep it through the air and it would crackle as a little mosquito body would fry. This is a genius invention and I think everyone should have one, but not something I wanted sweeping by my head while my leg hair was ripped out at the roots. 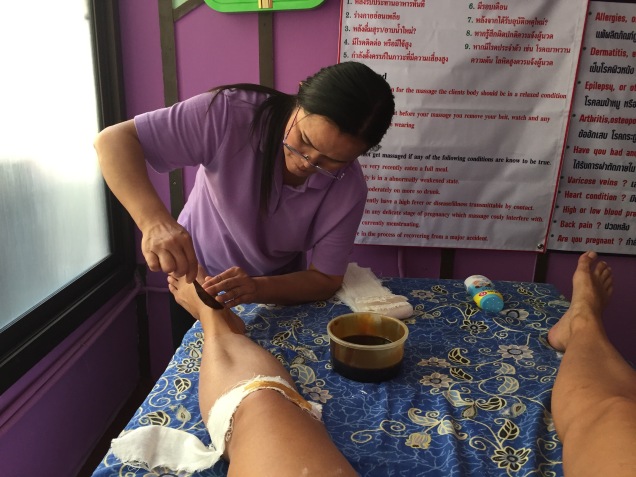 To me, Pai was somewhat of an anomaly in Southeast Asia with a seemingly high population of non-Asians. Nevertheless, I found it very relaxing and peaceful. I could definitely see the appeal for the ex-pat community. As I would have to return to Chiang Mai on the same road in which I arrived, I mused that maybe that’s why so many westerners had stayed. Back to Chiang Mai and back to the airport, it was time to refresh my tan on the islands!

*Other sites include hot springs and waterfalls. I didn’t visit the hot springs because they seemed overpriced and overrated. Apparently, there are also others off the map that are free. And as for the waterfalls, I’m going to venture purely on experience since I didn’t go, but I’m sure there are better ones out there. Sorry, I’m a cynic and maybe I missed the best of Pai, but I’ve traveled a bunch and I’d like to think I can peg an over-marketed tourist attraction when I hear about it.