Where to even start to express my gratitude for my stay in Kuala Lumpur? After Martyn left, I hopped in a taxi to take me to the ExPat neighborhood of Mont Kiara. I had never met Jeremy or Krystal in person, but we had several mutual friends in the States and had virtually known each other through Facebook since early 2015. They’ve been living in KL for a few years with their two daughters, Olivia and Ellie, and Krystal was quick to offer a place to stay before I even knew when I would be in Asia which I gratefully accepted. Aside from the pure tangible generosity that Krystal offered (from a foot massage gift certificate to a new toothbrush and the endless possibilities in between), the intangibles were without measure – being welcomed into their little family unit for meal time and play time and bed time, gossiping about the comings and goings of mutual friends at home, commiserating about being homesick, recommendations for a dermatologist and hair salon, and having a running partner, to name a few. Jeremy and I overlapped by only a few hours before he left to catch a flight to, of all places, Chicago. But even in the short time he was there, he saved my sanity with help backing up several months of photos as I switched from the devilish DropBox (don’t get me started) to the slightly inadequate Google Photos (can’t win ’em all).

I had my own room with a big comfortable bed and a view. Their wifi connection was a backpacker’s dream. The house helper even took care of my laundry. I felt like some combination of Little Orphan Annie and Pretty Woman….which frankly, makes a pretty sad combination but humor me please. I was insulated inside a big glass and steel bubble in a well-manicured gated vacation far from the chaos of Southeast Asia. Most of the time I loved traveling in Asia and I saw so many beautiful sites and met many beautiful people, but when the noise stops and you realize just how loud it is out there, I was content to pull the covers up over my head and hunker down.

Our friend, Sarah, was flying all the way from Iowa, USA to spend some time with Krystal and I so I had a week to spare and big plans. I thought I would use Jeremy and Krystal’s abode as a home base while I took side trips to Melaka, a famous historic town nearby, and Taman Negara National Park for some jungle trekking. I did go to Melaka, or Malacca as its sometimes spelled, but almost as soon as I arrived (after I waited an hour for a bus that would take me 3 miles to the center not realizing how illogical this was until much later), I was ambivalent about being there. There was a lively night market and a quaint old town to explore, but I wanted to go back to the cocoon in KL. Plus, it was a sauna in Melaka and the air con in my private room was on the fritz. I bought some souvenir sweets and random snacks from the Chinese grocery (including Melaka’s signature pineapple pastries that were so uninteresting that Olivia and Ellie didn’t even want to eat them) to share as gifts and hightailed it back to vacation in Mont Kiara. I couldn’t fathom the energy to leave again for Taman Negara, which would require 3 transfers one way, so it was thus decided I would save it for another visit in the future.

When Sarah arrived, it was close to 2am, but not too early in the morning to grill her on her relationship details….you know, standard girl talk. I had forgotten how much I missed this. I wanted to strap them both on to my backpack so as to not have an expiration date on the fun. 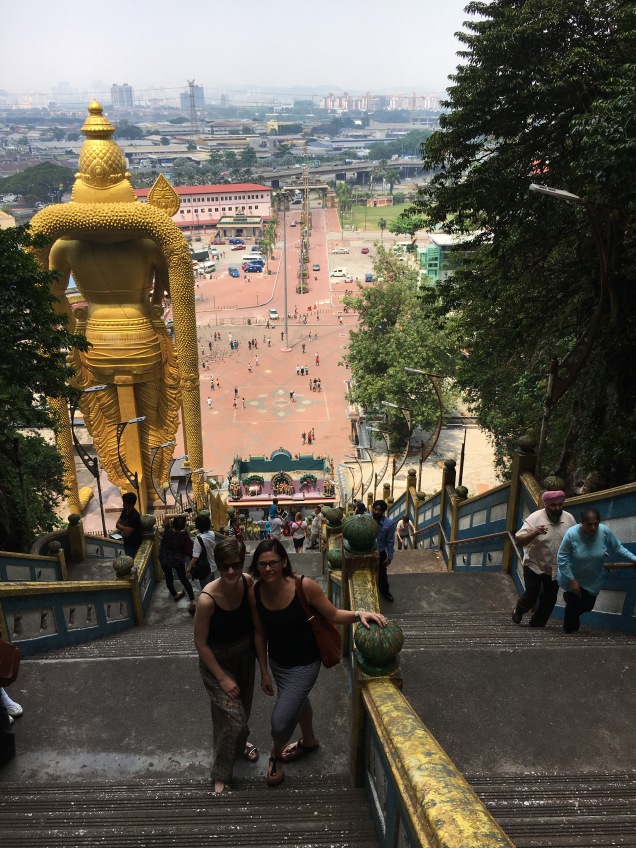 Krystal was in charge of entertainment on her home turf so it was a relief to just follow along and let her tell us what we were up to. First, we went to Batu Caves, said to be 400 million years old and is an active Hindu holy shrine. Inside, workers were busy feeding the monkeys rotten and leftover food only encouraging their cheeky behavior. A carton of spoiled milk was heaved into a clan of monkeys and the alpha picked through the chunks of sour dairy. Ok, that was quite enough for us! Time to move on…. At the Central Market, we maintained an awareness that it was Friday and the large mosque nearby would draw crowds for Friday prayer from all over the city by mid day, causing a disaster for afternoon traffic. But in the meantime, we scoured the markets at all of Krystal’s favorite places. The girls were keen to shop while I hung back, begrudging the 30kg I’m already lugging around. It was fun just to be doing something that felt so familiar as if the three of us had done this before in another place, another lifetime. 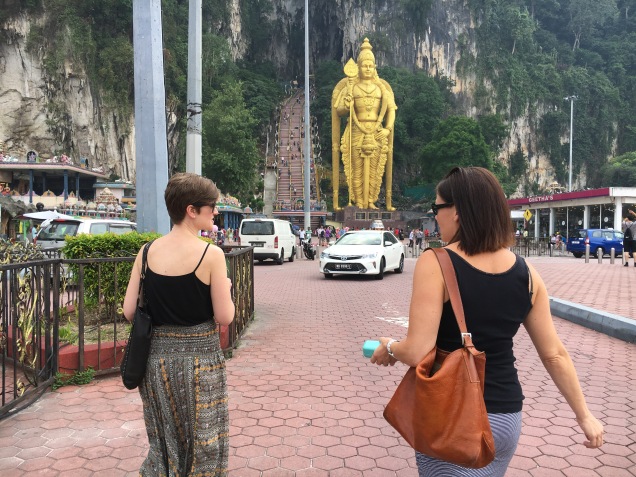 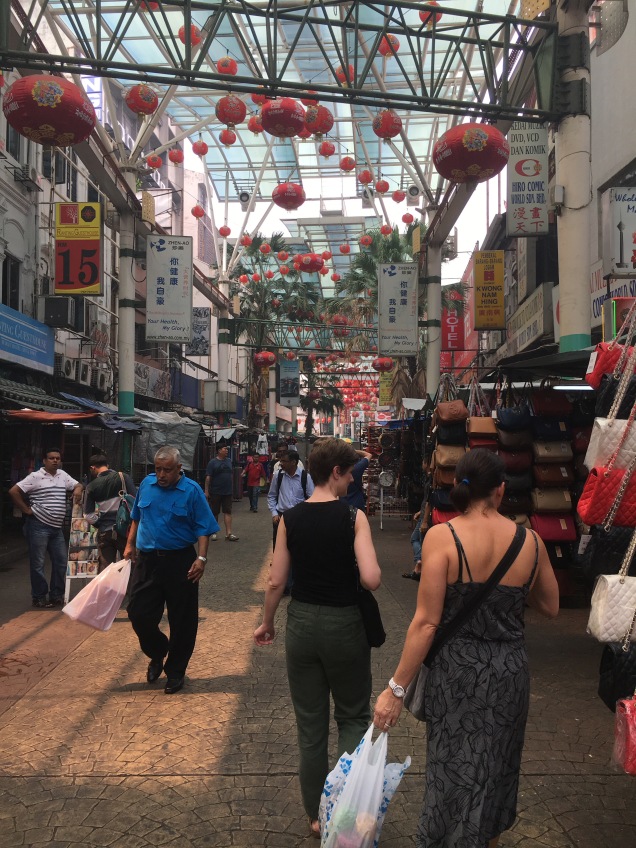 That night, to toast the start of Sarah’s vacation, we had dinner at Fuego with amazing views of the skyline, which was dominated by the famous Petronas Towers. More than a week had passed since I first arrived in KL, but I had yet to get up close to the Towers (or venture much outside of Krystal’s abode for that matter). I didn’t have a desire to go to the top, but I really wanted one of those selfies with the Towers rising up behind me. After dinner and en route to the Helipad, our taxi came to a stop at a traffic light right next to the courtyard in front of the Towers. Of course I did what any travel photographer would do. I jumped out of the car, sprinted to a mediocre vantage point, carelessly aimed my camera in a general upward direction and snapped a couple, turned around for the selfie angle and did the same without thought to lighting or weird look on my face, and sprinted back to the car before the light turned green. And that’s how my first photo to earn 70 likes on Instagram came to be. 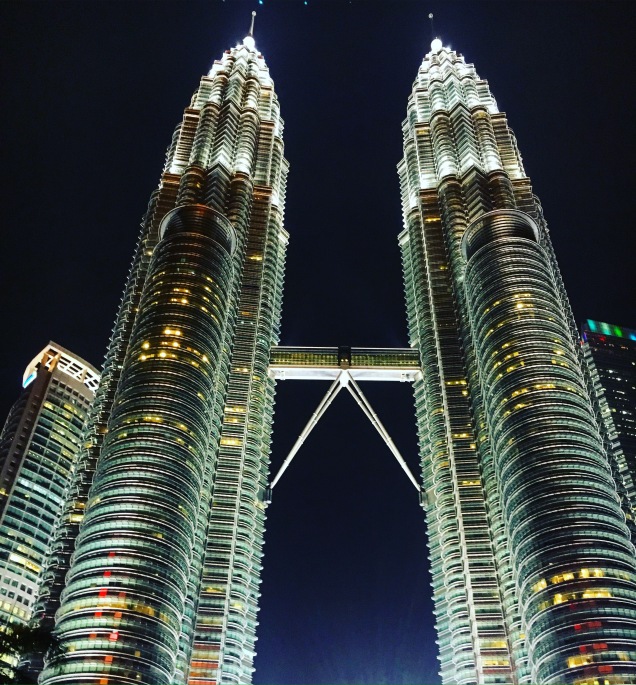 We finished our night at the Helipad, a literal helipad on top of a building that has been converted into a bar. The drinks come from the floor below, but the top is a wide open space with unobscured views of the whole city. All of us proceeded to get a little drunk, but let’s be honest, that only takes about two drinks each. Normal late 30-something girl’s night out humor ensued, which basically means “you had to be there” and “well, it was funny at the time,” so I won’t bore you with the details. But it was a great start for Sarah’s visit, which was only just getting started. We were off to Bali! 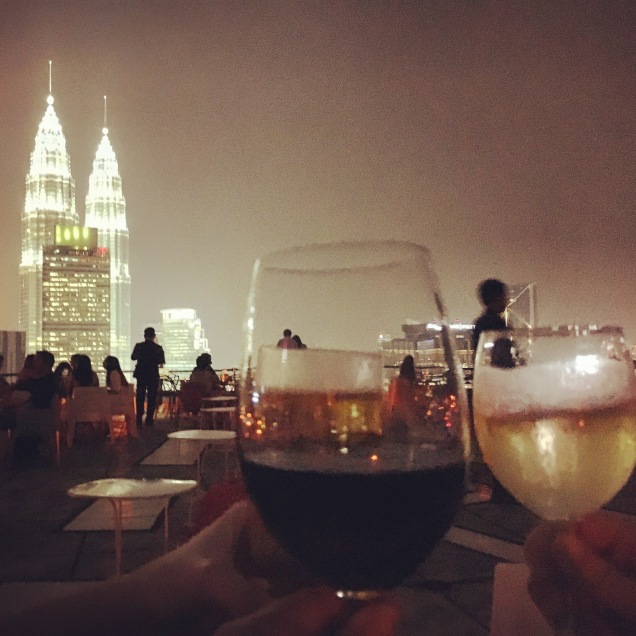 2 thoughts on “The Bubble”