In search of calm waters and some sanity, more Mercury antics were at play. I attempted to take a Grab Taxi from Ubud to Sanur (a 60-90 minute drive). This method had worked so well for me on previous trips so I couldn’t imagine it wouldn’t work this time as well. For those that don’t know, Grab Taxi is like Uber to summon a taxi with an app on my phone. I should have predicted the results, already knowing that I faced the obstacle of my hostel being on a pedestrian-only street and that I would only be able to use the app when connected to wifi…..at my hostel. I entered the details into the app, using a restaurant on the main street as a pickup location and decided to hope for the best. Unlike my arrival in Ubud where there were loads of drivers eager for my business, this time there was only one flashing blue dot indicating that only one driver was within an hour’s drive. I tried repeatedly to request that this one driver accept my ride until he gave in to my incessant pinging. After several minutes I walked to the restaurant sans internet connection and after waiting for 20 minutes, I stealthily stole the wifi from the adjacent restaurant only to learn that my taxi was still 20 minutes away. I watched that innocuous little blue dot sit still for another 15 minutes or so. I silently willed it to start moving, but with lots of under-the-breath cursing (so not entirely silent I guess). When it finally started creeping along, I felt as if I was winning some depressing game that you never really win. This was the kind of game where you marginally don’t lose, never actually win. I watched the dot getting closer and closer. I had the tag number so I went out to the road so he would see me. Here he comes! I’m waving my arms! And whoosh! He waves to me out the window and keeps driving. Utterly deflated and still pathetically optimistic, I think maybe he is just going to turn around and swing back except about 30 seconds later, the app tells me that my ride has been cancelled.

I pretty much turned into a cartoon character at this point, stomping my feet and kicking the air. And all the while, the three young gentlemen across the street, who had repeatedly asked me if I needed a taxi for the last hour, calmly asked me again if I indeed needed a taxi. It’s a conspiracy!!! Why did I not realize this before?? With my tail between my legs, I asked how much, and inevitably it would be double the price quoted on Grab Taxi. Of course.

My ill-fated taxi finally deposited me in Sanur on the east side of the island’s peninsula, a beach community I had chosen because it was kid-friendly. After visiting so many beaches, I have narrowed down quite specifically what I like and what I don’t like. I like calm clean waters so that I can swim. I don’t like big violent waves that are better suited to surfers. Therefore, my preferred beach often gets the label as “kid-friendly. The downside being that there are usually kids there. Oh, sure, I like kids, but even those of you that have them have to admit that you don’t always want them around when you’re trying to relax either. And they were not foreign kids. Most of them were local kids, who are very rarely supervised (not that it makes much of a difference). Let the rock throwing and dog beatings ensue. Aside from that, my hostel was nice with a pool, but was also a local hangout and had become too crowded and overwhelming. I decided to try a beach further south, yet after much fruitless searching, I realized that no hostels existed in the vicinity. A thought came to me….how much would it cost exactly if I got a private room in a nicer neighborhood? 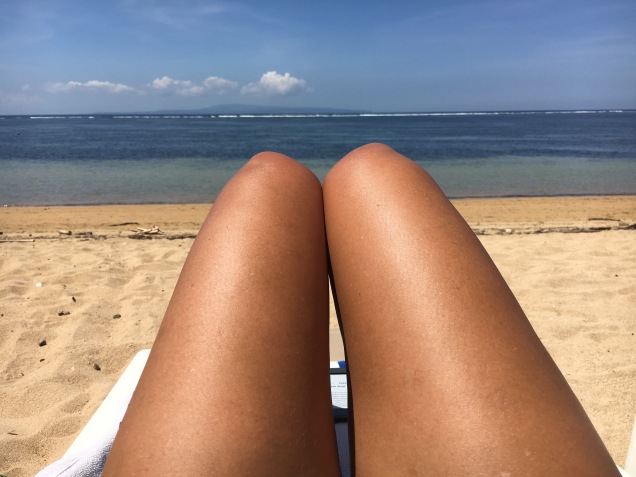 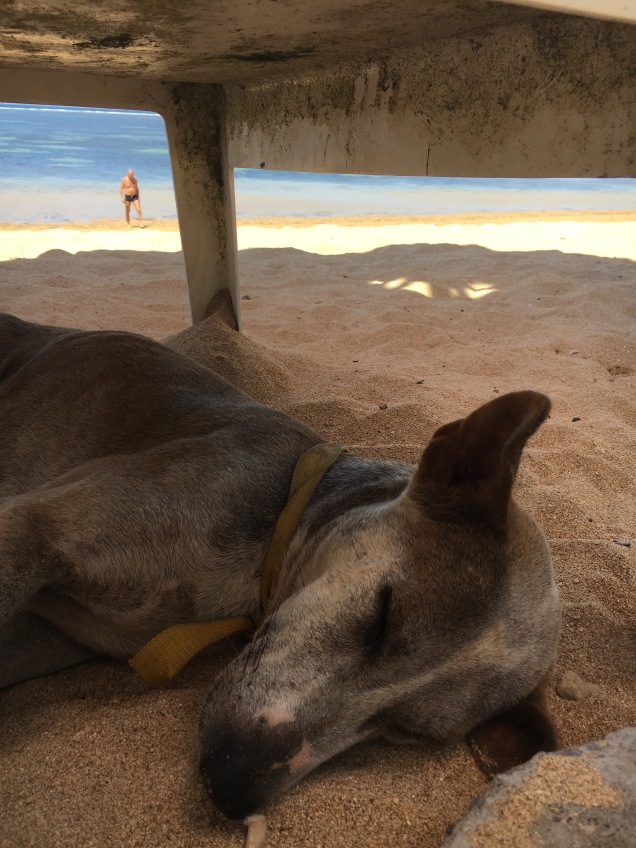 I found an off-the-radar hotel that claimed to be in Nusa Dua. Not in line with my traveler class, Nusa Dua is consistently considered the high end part of the island, but that’s where my kid-friendly beaches were said to be, with foreign kids (who generally do not throw rocks at dogs!). I wanted to be there. The only hotel with good reviews within my price range was Mahogany Hotel. It was at least 15 minutes drive from any beach, although they offered a free shuttle. There were no tourist services on the main road near the hotel, including any restaurants. Mahogany solved that problem too by having a decent restaurant of their own. 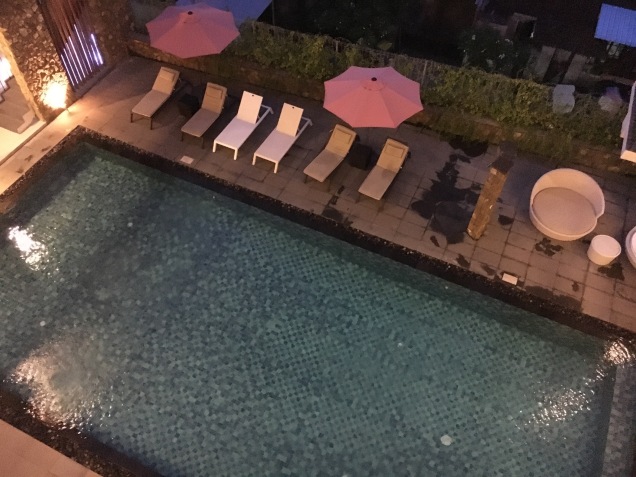 It really was a lovely place with exceptional staff and acceptable amenities. The shuttle (ultimately a private driver because the hotel was not full) wasn’t the least bit of a a nuisance. The manager from Mahogany recommended I go to Agendaz, a free (yes FREE!) beach club right on the beach. Complete with a large pool and loungers and house music, you could stay all day if you ordered one item. Never mind that, though, I ordered a chocolate milkshake, a banana smoothie, a vegetarian wrap, and a beer or two as if I was using my parent’s credit card. Spending a day at Agendaz allowed me to escape my traveler persona for just a few hours and be a tourist again. 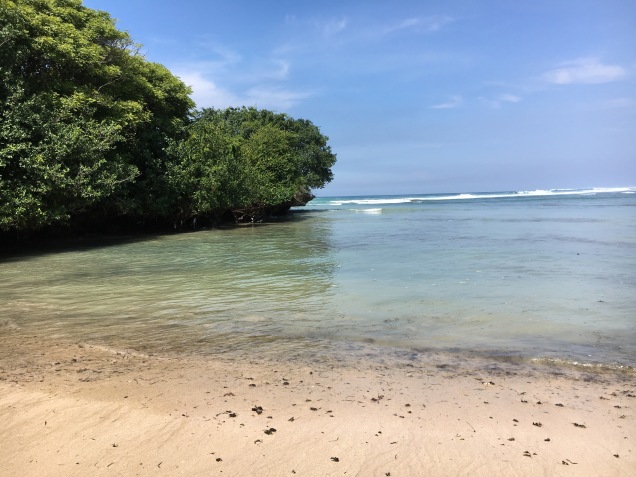 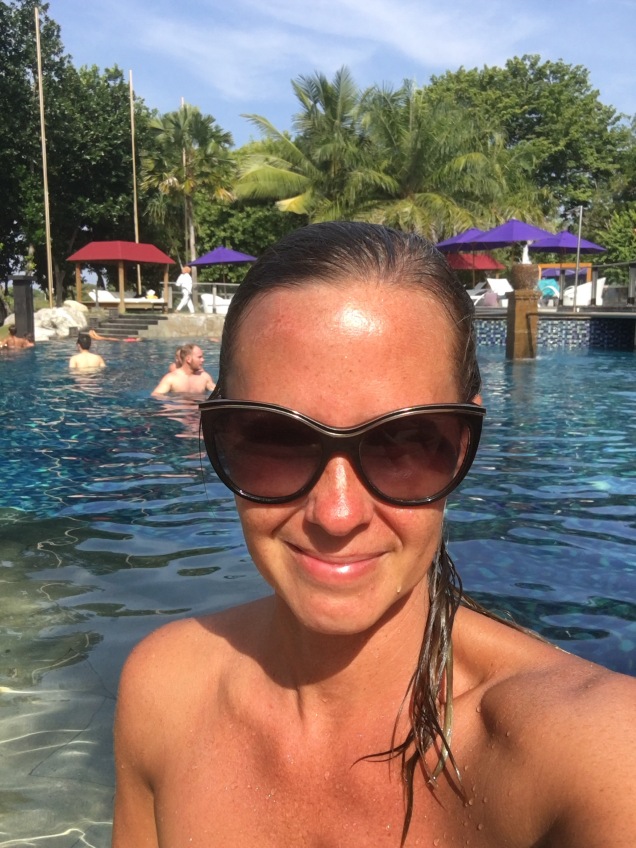 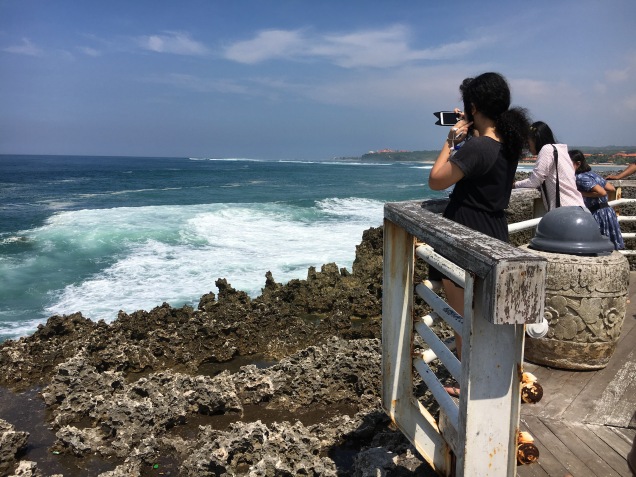 One of the great attributes of Mahogany was that it was close to the airport and I needed a home base for flights to neighboring Indonesian islands. For those keeping track, I paid about $32/night to sleep at Mahogany Hotel. Hostels run about $7-10/night in Bali, but for my sanity, this was a steal if you ask me!