I toyed with the title of this one. I was going to call it “Forgotten Europe,” but that implies that it was once a tourist haven and now is no longer. I don’t believe that was ever the case. I spent a healthy chunk of time traveling in Eastern Europe to charming localities, medium-sized cities, and natural attractions. Virtually all of them were without a strong tourist presence. I’m not complaining as we all know that tourism has been known to alter, or in extreme cases destroy, the authentic culture of a particular place. Certainly, though, most of them lacked the tourism infrastructure that makes ground travel and seeing the sights convenient. If you know your biggest tourist draw is a castle that is several kilometers away from the nearest bus stop, then why not offer a shuttle to take people there? Convenience aside, for those with time and an intrepid spirit, I thoroughly enjoyed my venture away from conventional European travel destinations and would recommend a detour off the beaten path to any one of these.

From Budapest, I took a 2 hr train journey to Eger. Eger is home of Egri Bikaver, the deep red wine known as “Bull’s Blood,” but also more well-known grapes as Egri Merlot and Egri Pinot Noir. It’s also in close proximity to the Tokaj wine region, which has been designated as a UNESCO world heritage site for its very specific climate and sweet wines that are produced there. This is why I went. I love wine regions – they always have their own character, but they are also always kind of the same in their understated pride of their local varietals. Following periods in history when it was invaded by the Mongols in the 11th century and the Turks 300 years later, each time Eger eventually fought back and flourished once again. The Eger Castle hovers just over the main square, which I found kind of dull compared to other castles in Europe, but it has some great viewpoints and a fascinating place in history as it was captured by several different groups and repurposed each time. 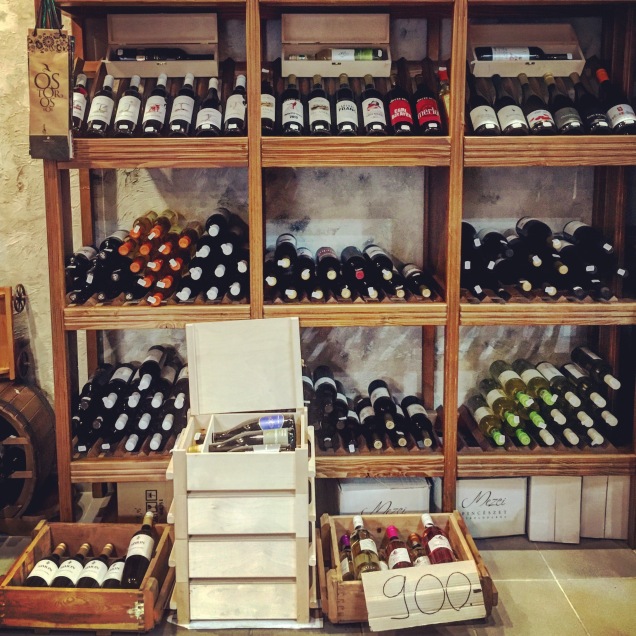 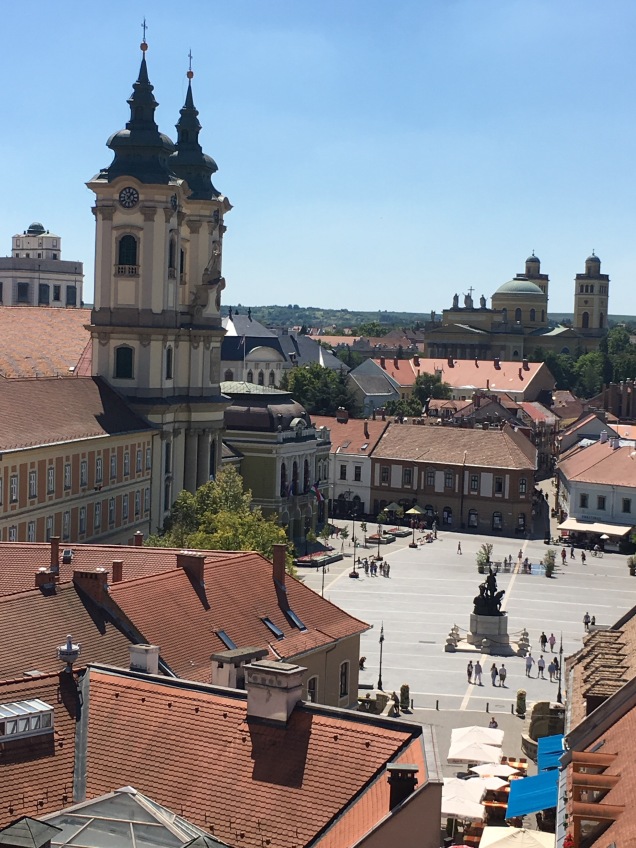 From Eger, I wished to go to Kosice, Slovakia to the north. However, as I was learning, illogical transportation schedules, mountains or other natural barriers, and sometimes just lack of demand were all reasons that my very logical route was to be turned upside down. I had to go back south to be able to link up with a different train that was going north. Even with the detour, the journey still only took 3 hours and was completely worth it. Kosice is the second largest city in Slovakia, although most of the interest lies in the main square so I didn’t stray far from there. I visited St. Elizabeth’s Cathedral and took in the view from Sibelius Tower. The Singing Fountain with loads of children darting in and out of the spouting water gave the impression this could have been a small town in any number of countries. I may not have encountered many English speakers, but watching the families play in the water was a solid reminder we are all not that different. 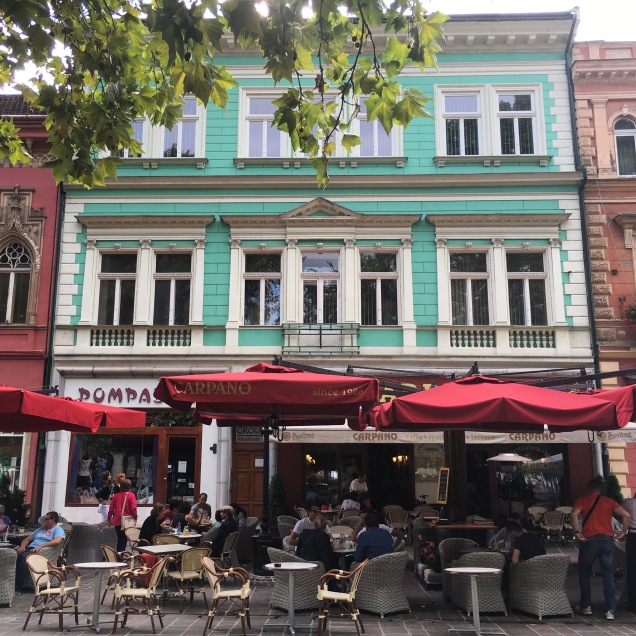 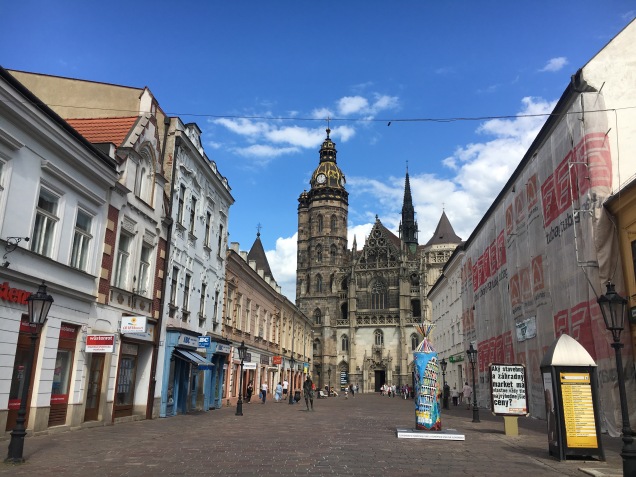 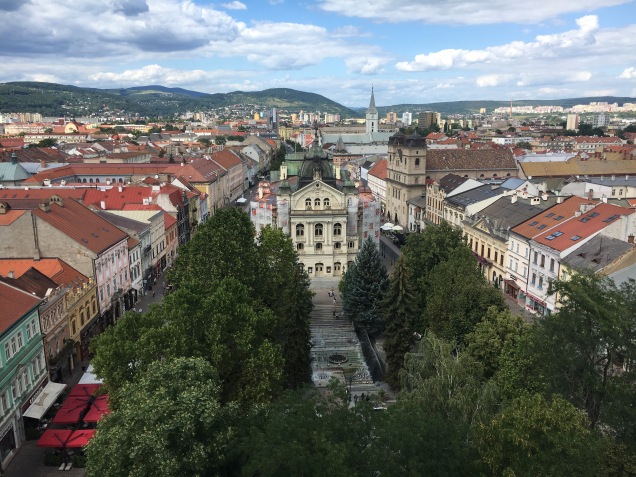 Another train and transfer to a bus for only a 35 mile journey, my next stop was Levoca. Named as a UNESCO world heritage site for its preserved city walls, Levoca was historically on an important trade route between Hungary and Poland in the 15th century. It became a significant center of commerce and culture with the world’s largest wooden altar adorning St. Jakub’s Church in the town square. Kids love the “cage of shame” punishment cage to play around and parents seemed to love pretending to lock them inside. In one afternoon, I had circled the walls and walked around the main square no less than six times so I was confident in only allocating a few hours here, yet I am really glad I went. It was extremely quiet with mostly local tourists, but somehow I had dinner at an casual restaurant with an unexpected cabaret show. The words to all of the songs were in English even though the performers couldn’t speak a sentence. It was perfect irony! 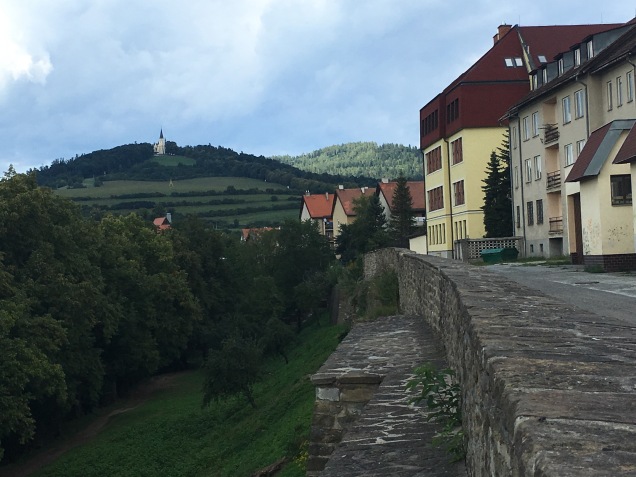 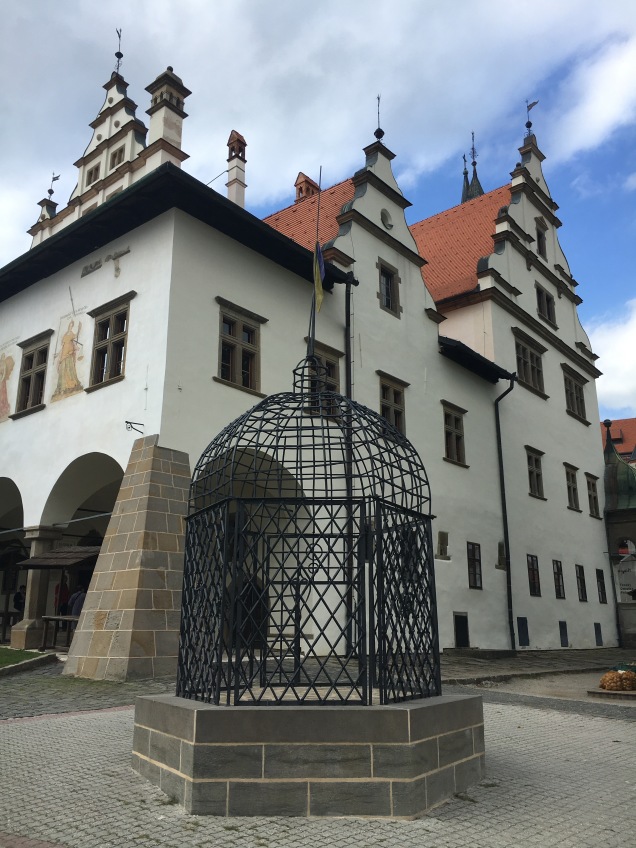 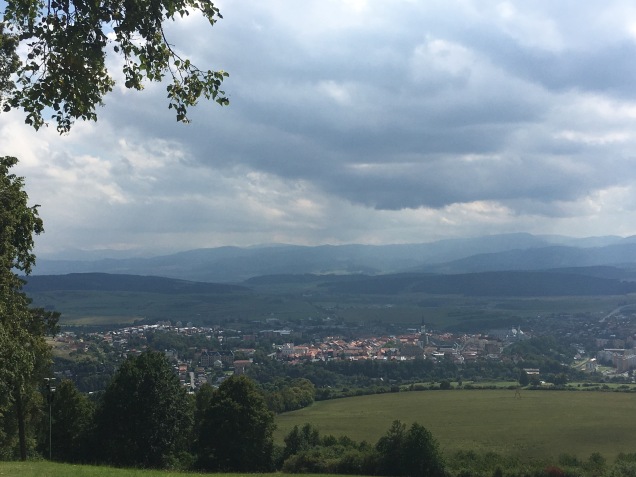 Spissky Hrad, or Spis Castle in English, is one of the largest castle complexes in Europe and another UNESCO site. Only about 20 minutes from Levoca, I decided to make a day of it. A deceptively easy climb up to the castle perimeter meandered through fields of wild flowers. While not the first monument where I have encountered this, it was the first time I gave it a try and loved it – in addition to traditional audio guides, they provided free wifi so you could download an app to your smart phone and listen to the guide on your own device. It was surprisingly easy, the key being that they had strong enough wifi to manage so many people downloading the app all at the same time. The castle exceeded their claims of a large monument. It took almost three hours between climbing from the village to the entrance, poking around in the museum, terraces and baileys, scaling the wall outside, and back down to the bus stop. I did listen to the whole audio guide, but somewhere between the novelty of using it for the first time and the 12th audio clip, I remembered that I don’t like audio guides and have a very hard time paying attention to them. To sum it up, the history is such that it was occupied from the 12th-18th centuries, abandoned after burning down in 1780.  Interestingly enough, noone is quite sure what started the fire but some contested theories include lightning, soldiers carelessly making moonshine while on guard, or the wealthy royal occupants intentionally setting the fire to avoid paying taxes.  Now that does not sound like something a wealthy person would do…. 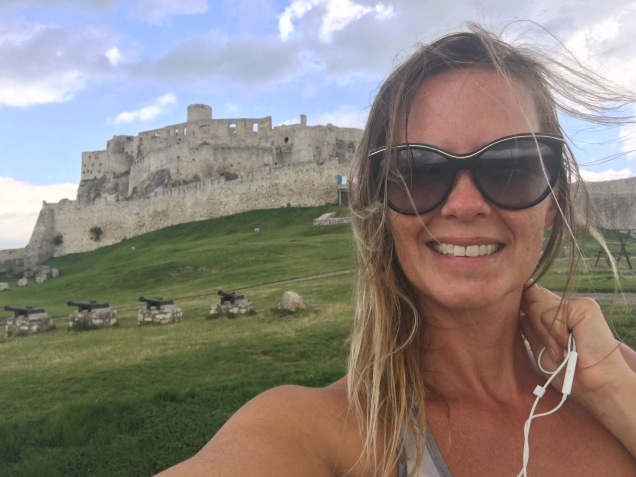 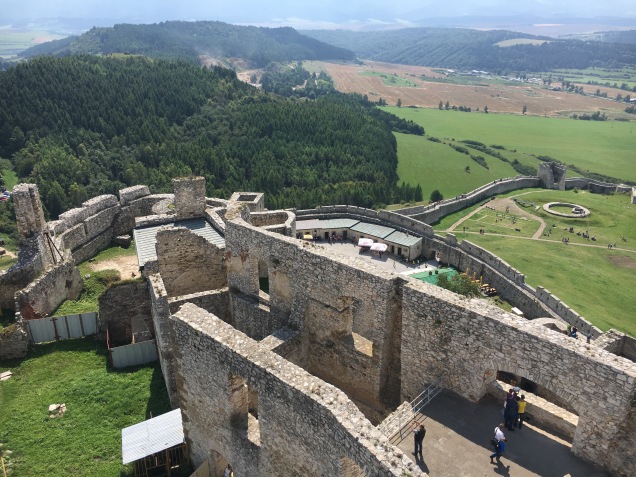 By the time I arrived in Stary Smokevec, gateway to the High Tatras Mountains, I had been away from the cities for just over a week, although it felt like months. The isolation of often being the only English-speaking individual was mostly ok until that time when you really wanted to check into your hotel except the door was locked and no one was there and there was a sign on the door that you can’t read and when you tried to get help, people ignore you because you can’t speak Slovak and then it started to rain. Up until then, it’s mostly ok. It was a bit lonely traveling in this part of Europe with the oftentimes insurmountable language barrier, but it was during the Olympics so I would plug myself into a TV or decent wifi so I could follow along, giving the sense that I wasn’t so far removed from the rest of the world. 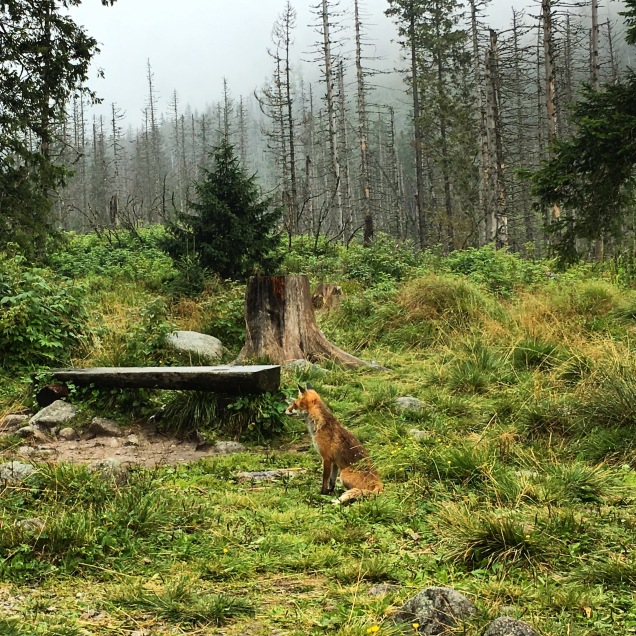 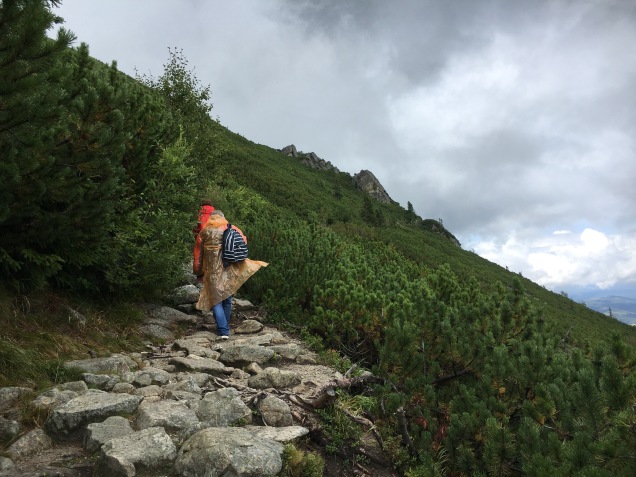 Stary Smokovec is a winter ski town, but during the summer, it’s a haven for outdoor sports. I was bowled over by the beauty here. I knew it would be mountainous and rugged, but even on the day when the rain and mist lingered, it couldn’t distract from the natural beauty of the Tatras. With two days of trekking, I traversed to two entirely different parts of the valley, admired ice-cold waterfalls, had a close encounter with a family of three red foxes, clambered over giant boulders, skirted a rock face with chains and a grimace, picked through not-often used pine needle paths, and dipped my toes in a glacial lake. It was some of the most pleasant trekking I had experienced in ages. I say this because it was challenging, but not too much so (family-friendly, if you will), and it was clean. To some this clean part may seem like a given, yet too many mountains I’ve seen are covered in plastic and paper litter. It’s enough to make me appreciate when it’s not there! 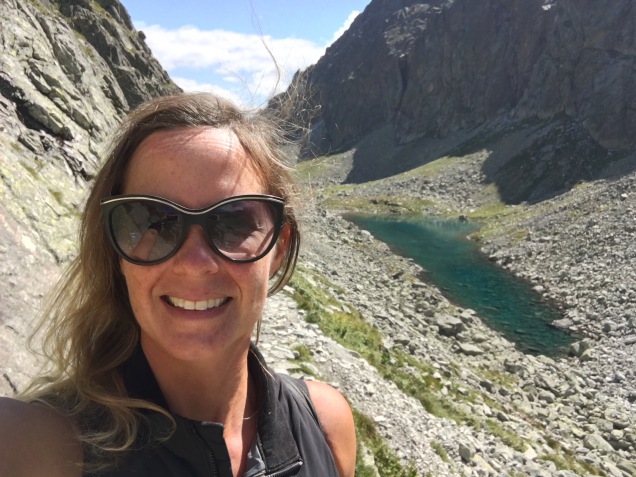 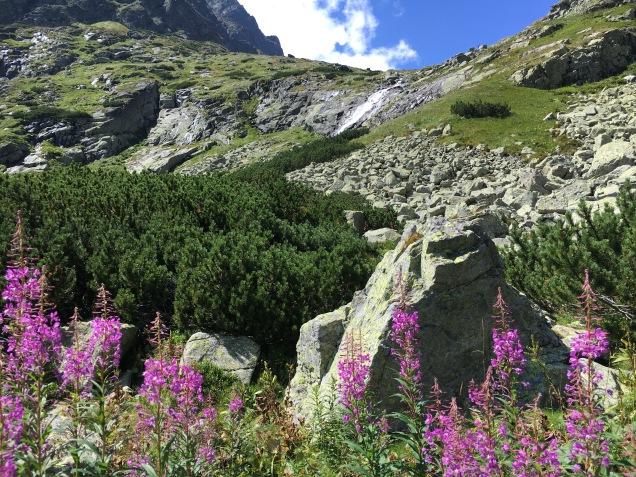 I still find it puzzling that these small towns were so devoid of international tourists, but I imagine the towns like it that way. Keeping their treasures a secret from the rest of the world are what make them so special and appealing when you are lucky enough to discover them accidentally like I did.