Few people have been so lucky to walk side by side with our closest primate relatives, but from the moment I had learned this was even possible, I wanted to go. To track chimpanzees and mountain gorillas in their natural environment is an experience like no other.

The Acacia Africa overland truck bounced and bumped from Lake Nakuru to Eldoret in Kenya, then to Kampala and finally, Queen Elizabeth National Park in Uganda. The journey from Lake Nakuru took us three days from the flat dry savannahs to lush emerald jungle mountains. Queen Elizabeth NP is one of the few places in the world with a thriving population of chimps so with permits secured, we were scheduled to start trekking immediately upon arrival.

A trekking group can be no more than eight people so our cozy group of thirteen was divided in two. One group of eight – Joel, James, Sarah, Jess, Jodie, Dane, Christy, and me – and one group of five (the self-proclaimed ‘slow’ group) – Larissa, Julie, Craig, Peita, and Ashley. My group would go the first day with the other group following the next day. After already seven hours of travel, I assure you we were all eager to stretch our legs. Our guide was a petite woman, probably in her twenties, dressed in a thick khaki park ranger uniform and armed with an AK-47 for protection.

Only about 200 meters inside the park, there was a rope bridge dangling precariously over a muddy river notoriously full of hippos and possibly crocodiles. The dangers all seemed pretty obvious, none of which struck a chord with me. I was about the fifth person in our procession to cross the bridge when the four that had crossed before me seemed to have disturbed a rather large African killer bee hive. Bees that are known for unprovoked attacks are not such a pleasant creature to encounter. Suddenly, there was shouting and running as we all forgot the shoddiness of the bridge and the predators below. At least three people were stung, some multiple times, before we finally landed safely on the other side. 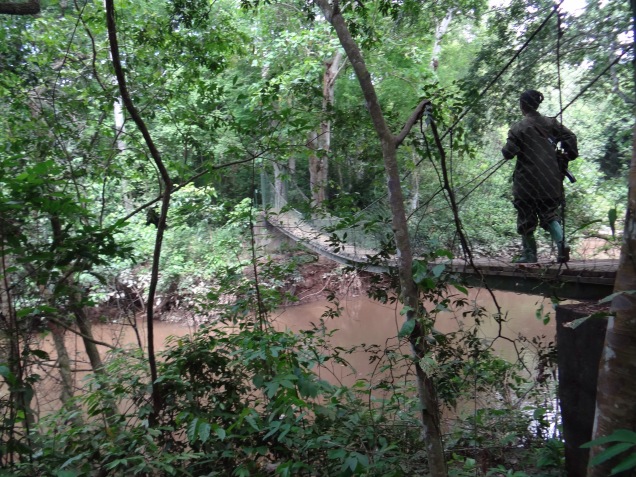 Our guide led us along the banks of the river where we spied colorful lizards and bathing hippos intermittently submerging and then breaking the surface once again with a loud sigh and splutter, sometimes showing their impressive teeth to their neighbor in a display of dominance. We stood only a few meters away, peeking through the tall reed grasses.

I had tempered my expectations for a chimp sighting, knowing that if we were lucky enough to be graced with their presence, they would be high up in the trees. Indeed when we found them, they were swinging through the treetops, fully aware of our every move and hollering to each other as they watched us watching them. Then something remarkable happened. One of the adult chimpanzees came to the ground and situated himself about 5 meters away chewing on a fibrous bush. He seemed relaxed and ignored us now, but for several moments, we had the rare privilege of seeing a chimp on the jungle floor. A rustle in the bushes behind us revealed another chimp and then another. All three effortlessly glided through the tree roots and thorn bushes and walked along the same path our tiny group had been using. Our guide’s face lit up as if even she was thrilled to see such an amazing sight. She motioned us to follow so we slowly, deliberately hushed our steps as we tried to mimic their movements. Much faster than we could ever hope to be in a harsh jungle environment we lost them when they crossed the river on a fallen tree. No matter, I was beyond satisfied with a fantastic encounter. 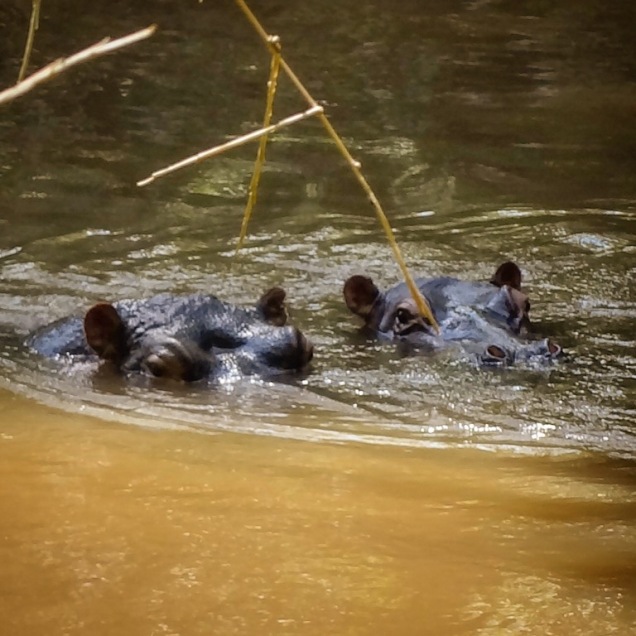 As we drove back to camp, fully elated with the successful sightings, the sky turned an ominous black. Out from the superior protection of Crispin, our safari driver constantly harassed Joel, who unfortunately had chosen to sit in the front seat, about a tip (even while the driver was stopping along the way to pick up grocery items for himself). Meanwhile, the skies opened and a deluge thoroughly began saturating the ground. All I could think was that we still had to set up our tents for the night.

The rest of our travel companions ventured into the jungle the following day and had an equally rewarding encounter with the chimps. Feeling very fortunate for our good luck, all thirteen passengers and two staff eagerly boarded our truck once again for Lake Bunyoni, a picturesque respite in southern Uganda. We passed tea plantations and forests of banana palms, revealing a much different landscape than we had seen thus far.

Lake Bunyoni was as amazing as I had heard it would be. The deep water lake sparkled from its clearing in the pristine jungle as we pulled into the parking lot of the campsite. The camp grounds were right on the banks of the water. The gang and I fell over ourselves to get out of the bouncy truck and immediately set up our tents so we could enjoy the view. An impromptu game of volleyball ensued and Peita decided to test her balance in a dugout canoe to retrieve a poorly aimed ball in the lake. In seemingly slow motion, she rocked once and then twice before tumbling head over foot into the murky depths. Unhurt, but humbled all the same, Peita patiently tolerated our unshakable laughing fits. 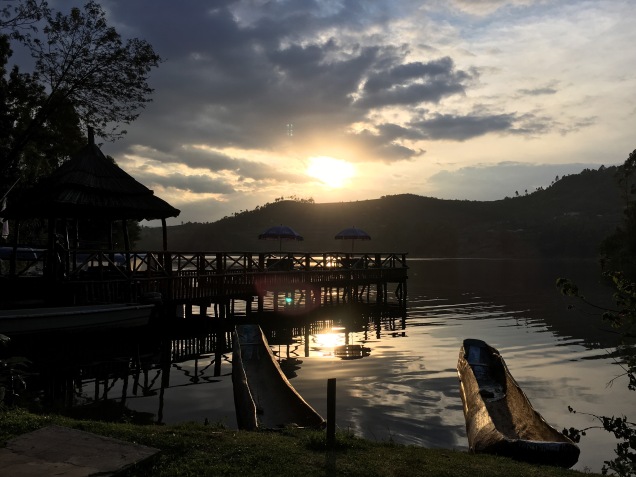 The morning of our much-anticipated gorilla trekking we had an early wakeup and a long drive to the Bwindi Impenetrable National Park, named for its thick overgrown forest that can only be penetrated in places with a machete. Again, our group would be divided in two so we stuck with the same split as the previous trekking and met with our guides for a briefing. There are five gorilla families that have been habituated (meaning they are used to people) in this forest and groups of no more than 8 people each would visit each family for one hour. Our permits cost $600USD for one hour with the gorillas so it was emphasized that our guide would do his best to get us close to gorillas, but nothing could be guaranteed. No refunds would be issued, blah blah blah…

Two scouts go before sunup to begin the long search for the gorillas. Based on where they knew the gorillas were from the previous day, the scouts will use tracking techniques – footprints, droppings, location of nests (gorillas sleep in nests on the ground because they like comfort too!), a path of crushed vegetation – to locate our assigned family before we have even started walking. Unlike the earlier gorilla trekking when this tourism had just begun to draw international guests, the trekkers with their guide would just start out tracking for themselves. It would take hours through an indirect route and the possibility was a lot higher to not see gorillas at all. With this new method of pre-scouting, we could take the most direct route so we were virtually guaranteed. 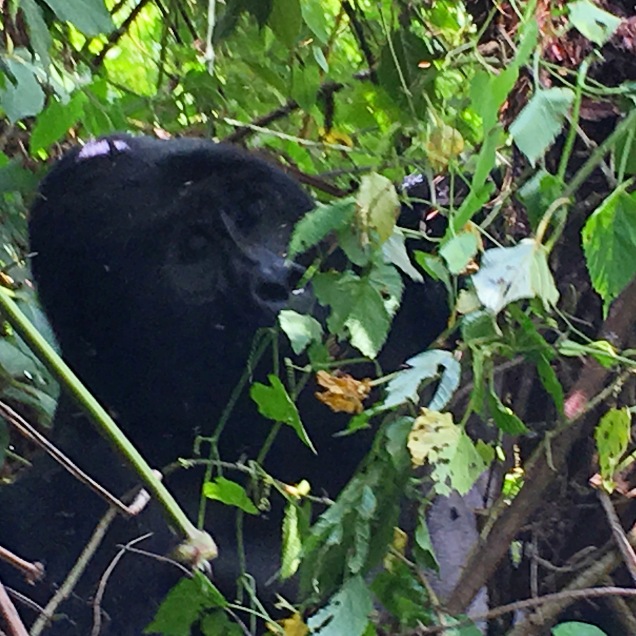 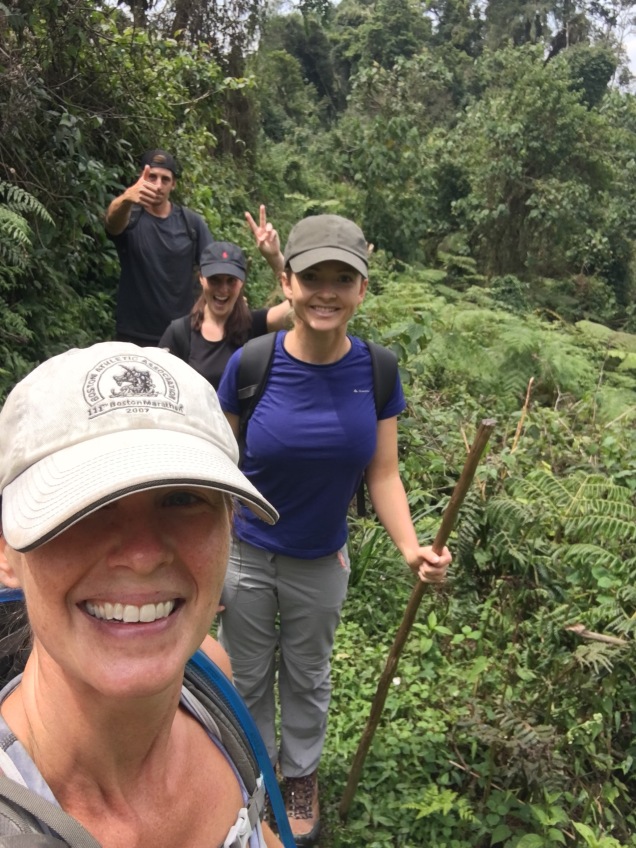 Both of our groups drove in separate vehicles to the same park entrance. Our group, perhaps appearing younger and fitter than most, commenced from the parking lot at the bottom of a steep barren road while our other Acacia friends rode up the road in the back of a pickup truck. The going was tough, yet not terrible, but it took us almost 45 minutes to even enter the forest and the road was not much to look at on the way. We were buffetted by two guides, both carrying weapons and finally began the proper walk. On a well-used trail for an hour or two, when we were finally close enough, it was time to go off-road. The “off-road” trail was still a trail, just more overgrown and less trampled. The excitement of getting closer to massive apes trumped the walking conditions so even though a couple of us weren’t so sure-footed on the new path, it mattered little. Another hour passed. Our guides stopped and whispered that we were about to see the gorillas. We could leave our bags and walking sticks behind so as not to make the apes feel threatened before we followed the guides and the scouts through the dense foliage. 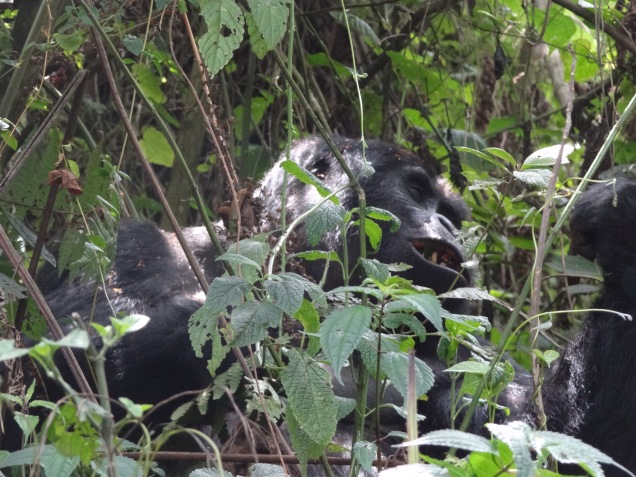 It’s hard to say now what I expected of my gorilla encounter. I knew others who had successfully completed this trek in the past and the experience had them raving about it for months, if not years, afterward. They had close-up and crystal clear photos of playful gorilla family members who stayed relatively in one spot, undeterred by the human onlookers. Using a machete, our lead guide pushed his way through the forest floor to get us within range and before we were able to catch even a glimpse of our first gorilla, they were on the move up the mountain. We followed. For the next two hours, we followed up and down the impenetrable mountain ground cover, through aggressive thorn bushes and muddy cliffs, tripping on exposed tree roots and crawling over mossy and slippery boulders, molested by fire ants and mosquitoes. It would take a gorilla 10 seconds to cover the same amount of distance it would take us to cover in 10 minutes. They didn’t seem afraid of us, yet they kept moving away. We were granted two hours instead of one because we never were close enough to get a proper view. There were 8 of us, plus 4 guides and scouts, and the terrain was such that not everyone could see at the same time.

By the time we turned back, a silence had fallen over the trekkers. We were exhausted after already six hours of maneuvers, but mostly I think we were disappointed. I know I was. They are wild animals after all, not to be predicted, although I had been anticipating this day for so long that I had wanted something different. I laugh now at my expectations. What did I think? That we were going to sit in a wide open clearing drinking tea while the gorillas entertained us with silly antics?? I still feel a sense of incompletion after this trek, but I wouldn’t trade it for the world. Perhaps one day I will return to give it another go….