A few kilometers outside of the bustling metropolis of Nairobi, a thin rope was marking off a rather large plot of amber-colored mud and two manmade mud holes sat in the center while our Acacia group rushed to the perimeter to get spots close to the front. As if on cue, one baby and then another and another, twelve babies in all, came running into the exhibition area. The handlers fed each of them from a bottle the size of a milk jug and the more ornery of the bunch would try to sneak a second one from the wheelbarrow serving station. Full up with sustenance, they would then enthusiastically dive into the mud and roll around or sample greens from some thorn bushes that were on the buffet.

We were witnessing twelve orphaned African elephants, aged from a few weeks to one year. They had suffered some of the most horrific experiences that no living being should have to endure at such a young age. Strangely, many had fallen down water wells or had been abandoned by their herds because of sickness or injury. But many had also witnessed their mothers being killed by poachers, some in horrific ways. Elephant poaching is a sad reality of the savannah when ivory can fetch such a hefty price as a status symbol in the Asian markets. It has been estimated that forest elephants have decreased by 62% since 2002 and more than 100,000 African elephants were killed on the savannahs in East Africa between 2010-2012 alone. During that time, the value of ivory in China had tripled and is worth $2100USD/kilo.

To see these hyper baby elephants so full of life, it’s important to remember that elephants do indeed have one of the best memories above most other species. Studies have shown that they never forget a face and will recognize each other even after decades apart. With a lifespan in the wild of about 50 years, one herd was shown to remember a drought that had occurred 40 years earlier and the exact route to an alternate water source when a new drought was upon them. One of the most remarkable things I’ve ever known about elephants is their capacity for grief and mourning when one of their herd passes away, sometimes remaining with the body for days afterward, reluctant to leave their family behind. Female elephants will stay with their same herd for life, but even males will stay until sexual maturity in those teenage years. A tight family unit endures so elephants are not only traumatized if a family member is murdered at the hands of human poachers, but they will remember for the rest of their lives. It’s quite heart-breaking to think of these horrific memories haunting the little orphans. In turn, committed volunteers tuck the young calves into bed and stay with them so they don’t have nightmares. 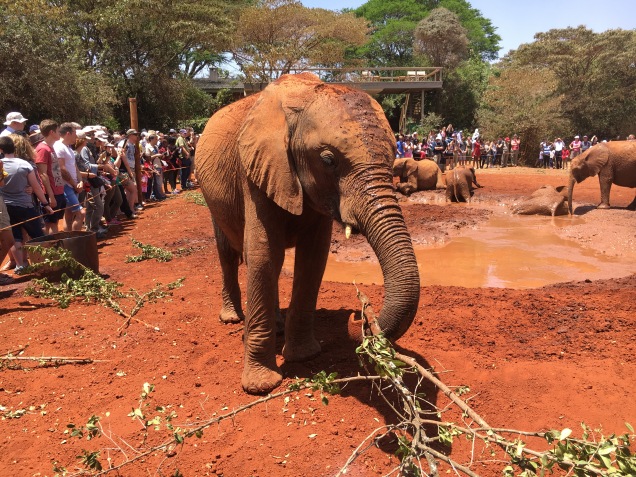 After watching these youngest calves parade in front of the spectators, they left the arena to make room for twelve more of a slightly older age. Equipped with a mic, one of the handlers announced for all 24 their names, how they were orphaned and at what age. The purpose of this performance of sorts was to entice donations, of course. For only $50USD/year, you can donate to this special place. I truly believe in the mission that is embodied at the David Sheldrick Wildlife Trust and I feel confident that it is a good place with the animals’ best interests in mind. If you are looking for a creative charitable holiday gift this season, take a look at their website – https://www.sheldrickwildlifetrust.org/index.asp – to read the bios of each of the orphans and consider adopting an elephant for yourself or someone else. 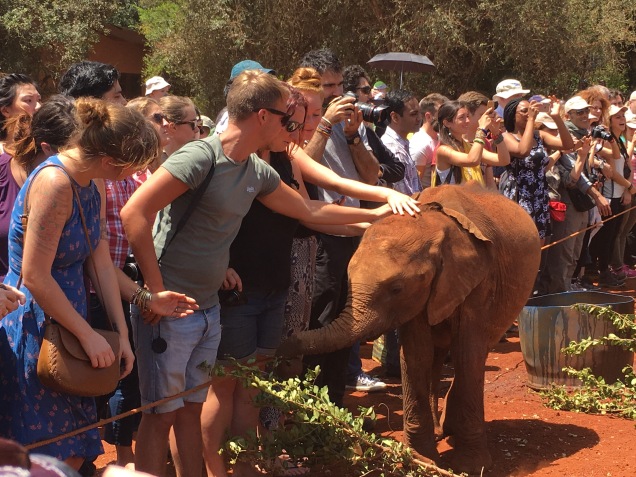 All around we agreed that the elephant orphanage was a positive experience so with little doubt, our entire group piled into a few taxis to go to the Giraffe Center. Attached to Giraffe Manor, an extremely high-end boutique hotel Instagram-famous for giraffes poking their heads through the windows to share your breakfast, the Giraffe Center’s mission is to educate the youth of Kenya about wildlife conservation. For Kenyan school children, the center is free while the rest of us pay about $11USD entry, a nominal fee to support their cause. I will admit that we only stayed at the Giraffe Center for about an hour so I’m sure there is much more than meets the eye, but I felt like we had entered a zoo. The only other wildlife I saw were a couple of warthogs, but otherwise, there were many giraffes within a rather large enclosure. Food pellets were available free of charge that you could feed to the most curious of the creatures and I seemed to remember a similar experience at a zoo in the States from when I was a kid. It appeared that the living conditions were spacious and clean and more of a natural environment than anything, yet it was still an enclosure after all, with pushing and shoving selfie-stickers trying to angle for the best position to see the giraffes. Such as it is, I can’t say my opinion of the Giraffe Center beyond this, but it seemed like a strange setup for a place billed as a conservation center. 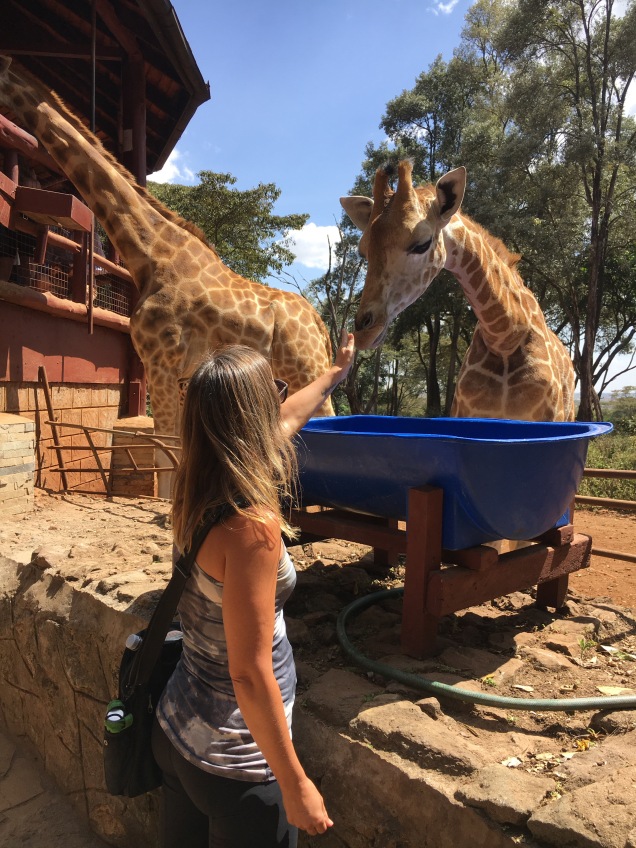 As it was the original Acacia group’s last night together before we added new people, a few of us spent time reflecting on the previous two weeks and the incredible things we had seen and done. Africa has a way of drawing you in – it is raw and harsh in many ways, but also magical and genuine. Few people visit the continent without looking forward to the next time. The Acacia truck would leave me behind in a couple of days and continue for 6 more weeks. I would be flying south for more wildlife adventures as well so none of us were departing yet, although I was already feeling a pang of regret for closing this Africa chapter so soon.