So how much did it cost? I get this question often and I’m sure there are others that want to know, but are too polite to ask. Well, I’ll tell you…region by region with a summary at the end. But first, the most important thing that I want to convey is that travel does not have to be as expensive as you might think. Sure, there are luxury package tours and lots of upgrades that CAN make travel unaffordable for many people, but it doesn’t HAVE to be. If you’re thinking of taking a trip, be it a short vacation of two weeks or an extended journey of two years, there is a way to make it happen. Cost doesn’t need to be a deterrent!

This post, as it is written, is intended for nomads and fellow backpackers so if you’re a fan of luxury travel, this isn’t for you.

Before I begin, a few caveats that will explain my chosen style of travel….

Accommodations – as a general rule, I slept in hostels in a shared dorm room. I didn’t pick the cheapest hostels, but would look for places with good reviews in a good location. No matter the stigma about hostel dorm rooms, I really liked some of them and definitely recommend considering this if you’re on a budget. Occasionally, I also camped, slept in private rooms in hotels, hostels or guesthouses, and stayed in AirBnB rooms from time to time. Accommodation is generally where I saved the most money over other styles of travel.

Food and drink – I rarely cooked for myself. I ate out almost every single meal, but usually limited meals to two a day because that was plenty of food for me. If I was hungry for a third meal, I usually ate fruit or something else equally light and inexpensive. Sometimes I would eat local food, sometimes I would eat in touristy type restaurants, and occasionally I would have street food. Also, only a few times did I ever have more than one alcoholic drink with my dinners and then only a few times a week, usually beer or wine, and I rarely went out specifically for drinking. I could have saved money by eating street food more often or cooking for myself (ever), but I saved money over other travelers by drinking less alcohol.


Ground travel – This is a tricky one. Generally, I took the cheapest option. However, if the cheapest and the next cheapest were close in price, but provided considerably more comfort (i.e. India) then I would upgrade. I would arbitrarily make a decision on upgrading depending on my mood at the time. And when I say upgrade, I mean a step up from local bus to tourist bus or from second class train to AC train. Usually, though, I chose the cheapest.

Activities – I never chose to not do something that I wanted to do because of the cost. That’s why I was traveling after all – to see and do stuff! If an activity was more than I had budgeted (e.g., Galapagos cruise, gorilla trekking, climbing Mt Kinabalu), then I would look harder to find a discounted option, although I wasn’t willing to sacrifice the activity itself. I would just adjust my budget so that maybe I would cut corners on something else down the line. However, in some cases when an activity was more than I expected (e.g., Shark cage diving), I decided I didn’t really want to do it that bad in the first place and I was willing to let some things go as a result.

Airfare – I tried to use credit card points and airline miles as often as I could, but if that wasn’t possible, I would keep my schedule flexible so I could choose a cheaper fare. Sometimes choosing less desirable flight times would provide a much cheaper fare. For longer flights, I usually booked 4-6 weeks in advance, but depending on the route, you could book long flights with much shorter notice and still get low fares. I just chose to be more proactive. For shorter flights, I booked anywhere from one day to two weeks in advance.

So in total, over 813 days on 5 different continents, I spent a grand total of $52,250.97. That includes EVERYTHING travel-related – airfare, visas, accommodations, food, drink, activities, ground travel, souvenirs (of which I bought few, but I accumulated a couple of tattoos!), personal items, laundry, and all other stuff (like paying to use the toilet or an ATM fee) that doesn’t fit into any categories. What it doesn’t include are things I was paying for at home – insurance, storage for my stuff, a replacement iPhone, a replacement iPad, and a replacement keyboard for my iPad. Sheesh! This works out to $64.27 per day. Let’s see how I did it…

Before each graph, I’ll list out some details specific to my time there that may make the cost higher or lower than you would expect. Text in red if it’s higher; in blue if lower. If no comments exist, then it can be assumed that these are straightforward backpacker costs.

Namibia – I spent four weeks volunteering at a wildlife sanctuary 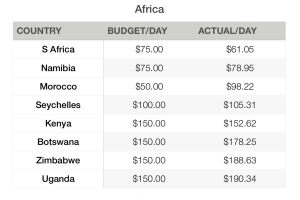 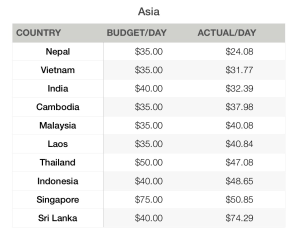 Spain – I studied Spanish for two weeks in Córdoba 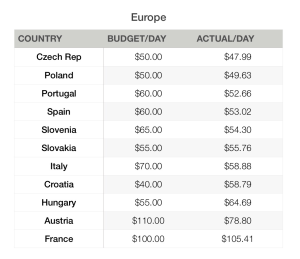 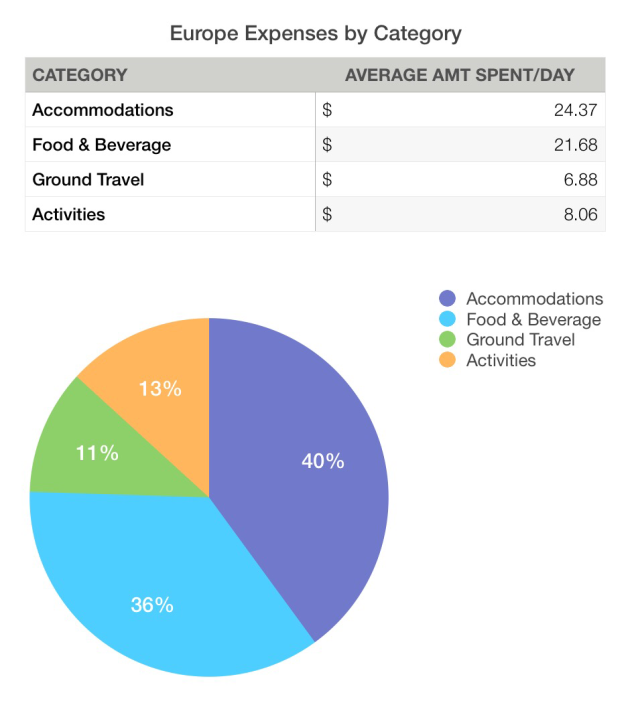 Bolivia – I studied Spanish for one week in Sucre

*Does not include Galapagos – Galapagos cruise was 7 days and cost $3,462.97 for one person sharing, including airfare to/from Quito. I didn’t include this in the cost breakdown of South America because it’s not considered typical backpacker travel and significantly changed my per day average. It’s possible to go to the Galapagos using a discounted or cheaper itinerary, but I wanted to have a specific experience and was willing to spend more to make it happen.

Enlightening even for me, just compiling these graphs all into one place, you can see just how expensive Africa travel was compared to everywhere else.   I did several tours, which add up quickly, but they saved some headaches from logistical concerns of getting around on my own.  I went over budget in almost every country because of this, although Africa will long hold a special place in my heart so it was worth every penny!

Asia, specifically Southeast Asia, is commonly thought to be the cheapest region in the world to travel, but South and Central America are not far off.  Countries like Colombia and Guatemala are challenging that preconception, whereas Thailand and Indonesia are creeping up in cost as they become more and more popular.  Food and bus travel were slightly more expensive in South America than they were in Southeast Asia, but if you consider how much wine I drank in Argentina and that bus travel often lasted for more than 24 hours in the Americas, that extra expense was definitely justified.

And in Europe, I surprised even myself with falling under budget in almost every country I visited.  I spent a lot more in Croatia than I expected (my most expensive dorm bed was in Dubrovnik at $50 per night) and a lot less in Austria.  I stayed away from pricey day tours, favoring “free” walking tours as an alternative, and walked instead of taking another form of ground travel.  It wasn’t that hard to keep costs in check.

I hope this post sheds a ray of light on the behind the scenes part of round the world travel.  I know the cost can seem daunting, but it doesn’t have to be a showstopper.  Please use my experience to create your own travel budget and if you don’t follow any other advice, I highly suggest keeping track of your own travel expenses.  I’ve always done this, in travel and in my life back home.  I can never say, “I don’t know where my money went” because I know where it went.  I find that my money goes a lot further when I write it down and forces me to be accountable, if only to myself.  Good luck!

8 thoughts on “Proof in the Numbers”