Motivated by my new resolve for independence, I booked a bed in a 3AC car for our night train to Mysore. A 3AC car indicates air conditioning in a car stacked three beds high. 3AC is right in the middle comfort-wise and price-wise. Mel agreed to join me while Jill, on the other hand, booked a sleeper class ticket. We were all on the same train so what did it matter? Mel and I, both on the top bed, giggled as we struggled to get comfortable in the tight space. I shoved my backpack into my foot space and when that became too awkwardly uncomfortable, I would flip around and try to use it as a pillow. We had a gaggle of women on the beds beneath us who gossiped well into the night. 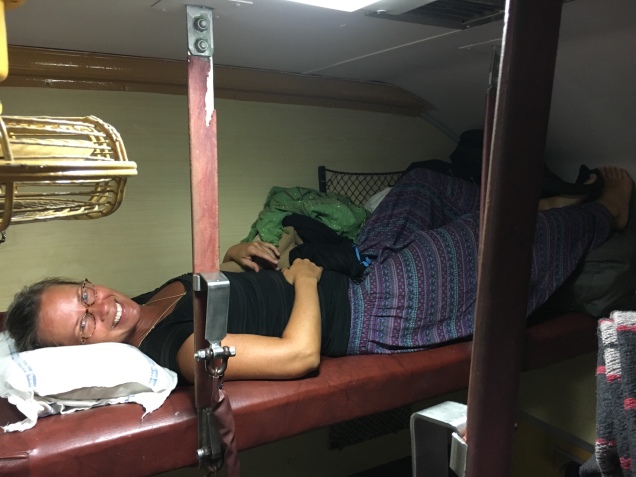 In the early daylight hours before the train arrived, the women were awake again and sharing homemade snacks from various plastic bags. A man shuffled through selling chai. The smell of potatoes and curries set my stomach to rumbling. It was impossible to sit up in our beds so Mel and I climbed down where the women offered us a seat. They offered us nuchinunde (smashed balls of dal and spices) and nippattu (crackers made of rice flour, coconut, and nuts) with insistent warm smiles. They didn’t speak English, but somehow we understood each other perfectly. It was wonderful.

I had booked a hostel in Mysore called The Mansion. We would only be there one night and it was in an easy convenient location. I knew the price of 500 rupees ($7.50USD) might be more than Jill cared to pay, but if she had chosen to stay somewhere different we could still meet to visit the Mysore Palace or at the very least, we would be on the same bus to Bangalore the next day. I saw no reason we needed to stay in the same place if it was going to be a hardship for either of them. I had heard good things about The Mansion and I was looking forward to staying somewhere with other backpackers. I didn’t see my choice of hostel as having anything to do with either of them. Apparently, I was wrong.

Mysore Palace, barely more than 100 years old, is grand and opulent and worth the visit. It is constructed inside the Old Fort and surrounded by an expansive garden. As the official royal residence of the Wadiyar Dynasty, shoes and photos of the interior were prohibited. We checked our shoes at the door like a coat check. Cool marble and pockmarked stones, the feel of different textures on my toes was enchanting. One woman was caught taking photos in one of the private halls and in a trailing veil of brightly colored saris, she and her friends were chased by a brigade of security guards. It was almost like a child’s game of tag. When the first security guard caught her, she laughed and he just shook his head as he made her delete several photos that she had taken of the building’s interior. He gave her a lighthearted scolding before sending her on her way to slyly take more photos.

Once we were safely outside of the photo-free zone, several families approached us asking to take pictures with us. This is quite common in India and we were pleased to oblige if we could take our own photos as well. 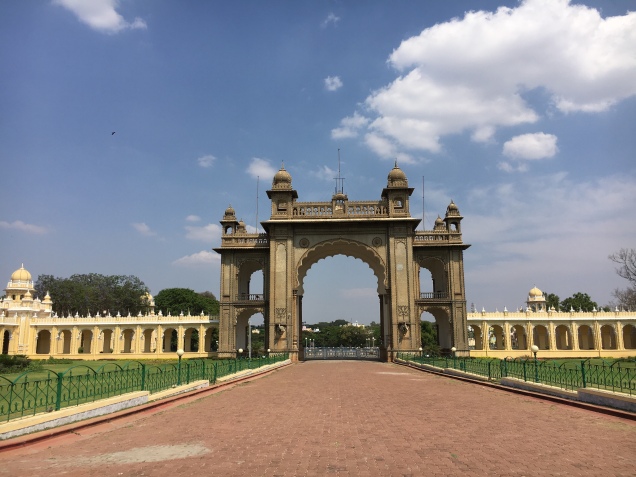 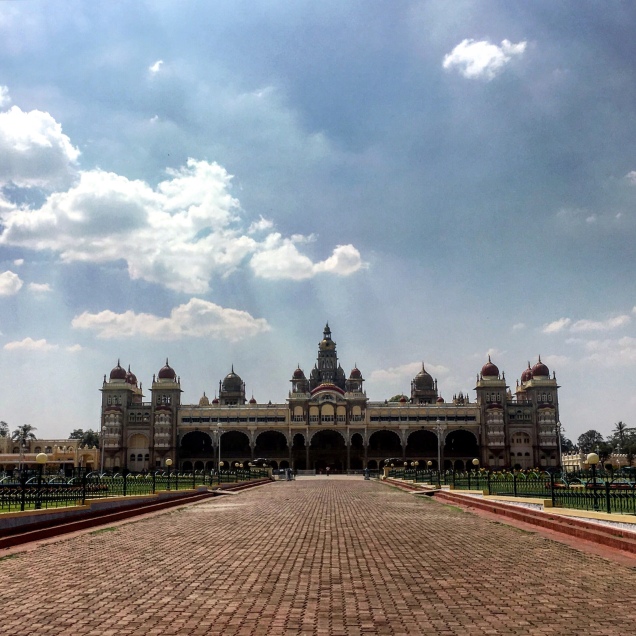 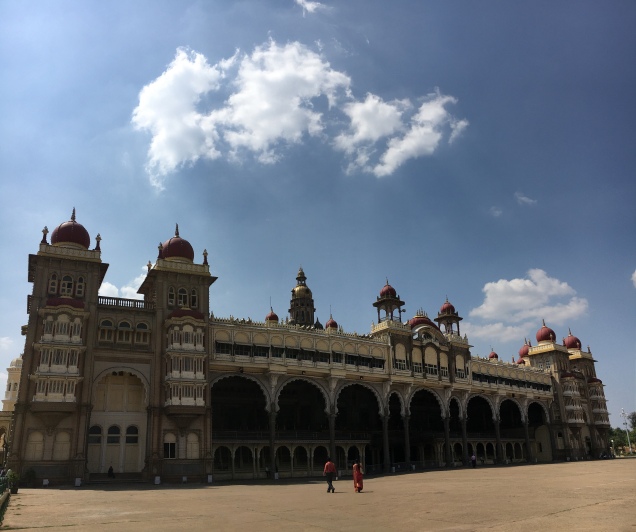 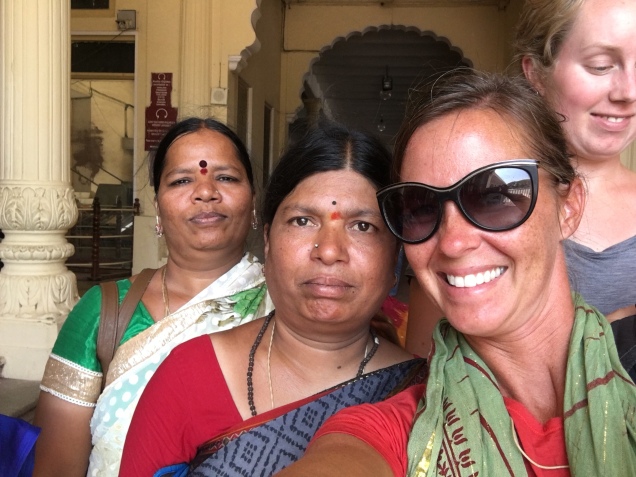 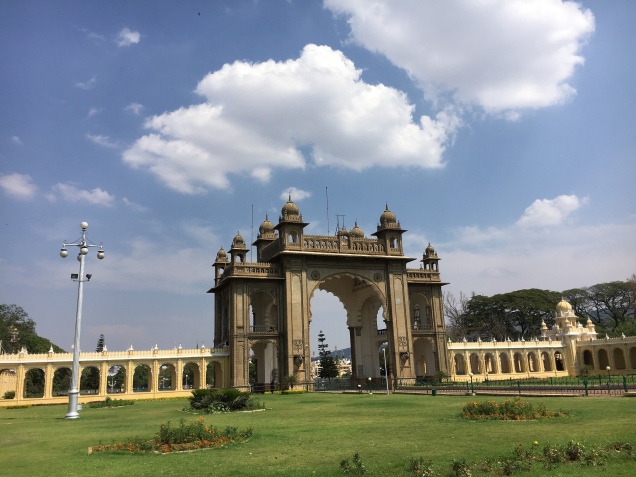 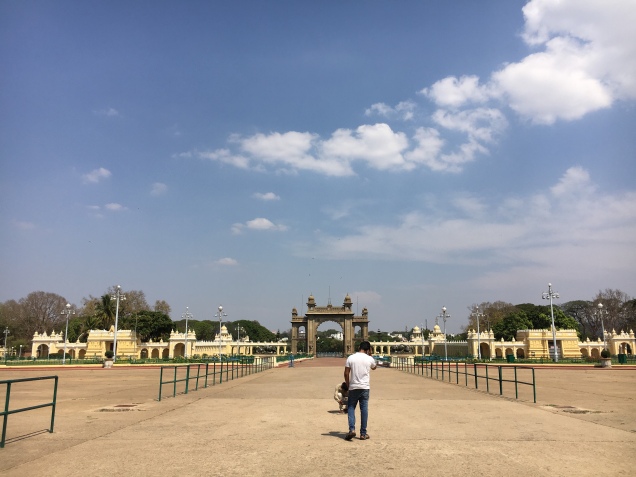 Having visited the palace, the afternoon was open for each of us to tackle a few mundane tasks. Mel needed to find a pharmacy. Jill needed to get passport photos. And I needed to do laundry and finally pull the trigger on a trans-Pacific flight I had been contemplating for a few days. It was lunchtime and it seemed logical that we could eat first before parting ways; however, Jill saw a photo shop and ducked in to inquire about the cost. It was a tiny cramped storefront so I stood in the adjacent alley while the other two were inside. Five minutes dragged into 20 minutes which dragged into almost an hour. I was watching my afternoon of anticipated productivity dwindle into nothing. As I waited, I kept thinking of more and more things I needed to do. I stuck my head in the shop to tell them that I was thinking of getting lunch without them and would it be ok if I saw them later? Jill snapped that they were almost done as if she was expecting me to say that. I was rebuffed so I stayed. Still, I don’t understand why it mattered.

Lunch was a sad forgettable thali and we barely spoke. I just needed to start tackling my to-do list. We paid the check and I excused myself back to the hostel, but the cold goodbye was not lost on me. I later found out they perceived I was being selfish because I didn’t stick around to find Mel’s asthma medication or to seek out a bottle of water that cost 10 rupees instead of 12. How and when did independence become such a crime? There was so much miscommunication stacking up between us I had no idea how to get past it.

A few hours apart and I felt refreshed and ready to let grievances lie. We had all talked about an evening yoga class so I expected to see Jill and Mel amongst the students, but they never showed. It was only me, a spindly-limbed Spanish guy with dirty feet, and the blonde Danish instructor who was recently accredited from a school in Varkala. A few sun salutations and controlled breaths later, I couldn’t even remember what all the discontent was about.

I found Jill on the Mansion’s wide exterior porch and said I missed her at yoga. She grumbled something about never planning to go anyway. It was obvious that she was stewing about something, possibly me, possibly not. Whatever the case, she didn’t seem to want to talk about it and I couldn’t be bothered to pry it out of her. Her negative energy no longer had a place in my solo journey. 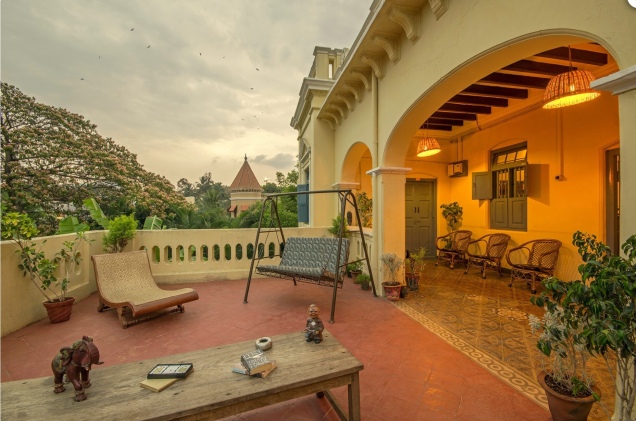 When it came time to pack our bags to leave Mysore, we walked the relatively short distance to the bus terminal. I was navigating so I walked in front, while the other two trailed behind. We usually had to walk in the street and it would have been impractical, if not dangerous, to walk shoulder to shoulder anyway. In spite of the recent conflict, I was in a relatively good mood allowing the introvert in me to reflect on all of my experiences so far. Jill and Mel seemed to be in good spirits as well as they talked amongst themselves. The last thing on my mind was whether I was doing something wrong or offensive. Again, I later learned that I was sulking and ignoring them. Misinterpretation again prevailed.