The Ernakulam Railway Station was as close as we were going to get to Fort Kochi by public transport. The train from Alleppey was short. I sat by the open window, allowing the hot dusty air to tussle my hair into a sweaty rat’s nest. Jill sat opposite me and fell asleep sitting up. She had picked the hostel after overlooking several others. I had kept quiet when she scrolled through the options, selecting the one with the least remarkable reviews, with the least desirable location, and with the lowest price. While she slept, I checked the listings for alternatives. I had been picking my own hostels for more than two years and while I’m sure her choice was adequate, I was partial to another place called Happy Camper that had better reviews, a better location, and a full $3USD more expensive per night. My gut feeling told me I would be happier at the second option. This was the last city we would travel to together – the time had come to make a break for it. 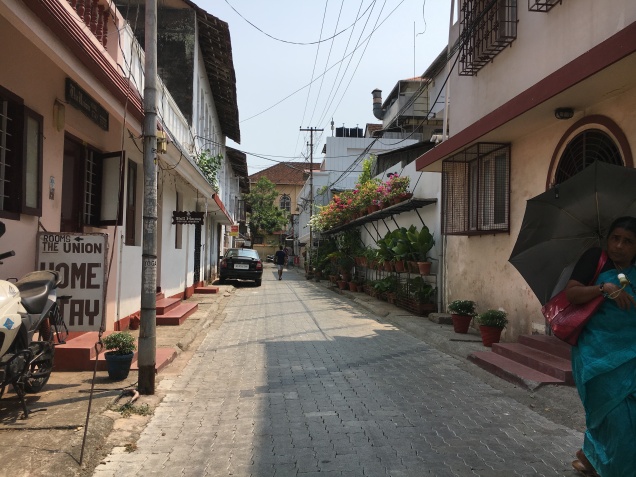 Ernakulam is the more industrial cousin to Kochi’s Old Fort tourist district so when we disembarked the train, we were not quite where we needed to be. Jill wanted to find a local bus to take us the rest of the journey so I shuffled along behind her, still trying to protect my shoulder, knowing there was a bus station a short distance up the road. Unfortunately, the road came to an abrupt end with a graffitied concrete wall that was conspicuously absent from the map. A turn to the left would lead us through a residential neighborhood; a turn to the right would cross the train tracks. Jill began to follow a few other people that were heading across the rail yard in the direction of the tracks. In my flip flops, I stepped over broken bottles, plastic waste in varying degrees of weathered decomposition, a sleeping dog, and loads of what we will just pretend was animal waste. I nearly slipped in a neon green liquid that formed a steady stream downhill. I was concentrating so hard on the placement of my feet and my balance that I hadn’t looked up to notice the next obstacle in our way.

We had reached the outermost train platform with a concrete sidewalk relatively clear of trash and debris, but there was about a five foot gap with a brown sludgy liquid that smelled like exactly probably exactly what it was. The other people in front of us were all hopping over the river of poo. Jill turned to look at me just before she leaped over too. I hesitated at the edge, mentally calculating (rotator cuff x 30 lb of luggage + unreliable flip flop grippage – swimming in Shit Creek). Yeah, no. I didn’t mean to cause a problem or make things more difficult, but the negative outcome was just not worth the risk. I told Jill I was going to turn around, backtrack through the residential neighborhood, and meet her at the bus station. An instant frown seemed to embody her entire face. I turned to go just as she brushed past me stomping through the trash and debris. Here we go again…

In no time, we had reached the bus station via our alternative route only to learn that we were at the wrong station and there weren’t any buses departing to the Old Fort. The next best option was to take an auto rickshaw. I’m not sure what exactly happened next, but there was some confusion in negotiating our fare with the driver, which started with Jill and I both talking over each other to clarify an amount with the driver and ended in a full on screaming match with each other as our bewildered driver puttered along through traffic. Four weeks worth of stifled frustrations and miscommunication came out as word vomit that couldn’t be taken back. In less than sixty seconds, everything that shouldn’t have been said was said and the rest of the journey we sat in silence.

I didn’t tell her, however, that I would not be staying at the hostel she picked until we arrived. We got out together and paid our driver. I said my decision to stay elsewhere had nothing to do with our recent outburst. I wished her luck in the rest of her travels, that I was sorry that something had broken down along the way, and I walked the four blocks to Happy Camper. The last time I saw her she was scowling and huffily turned on her heel and walked away.

The rest of the afternoon I felt free for the first time in India. I wandered through the kitschy tourist market, walked along the coast watching the large Cheena vala (a type of stationary Chinese fishing net) hauling their catch, teenage boys skipping rocks at low tide, young girls gossiping and watching the boys, a dog nosing a discarded fish carcass while a flock of seagulls tried to pull off a robbery. Mostly, I just sat and watched this sleepy port go about its usual routine. The guilt of making my own decisions had just vanished. I reflected on how much I had loved this country and all of its unexpected treasures. I still had two weeks, but I would be leaving the sultry south for the cacophony of the north. I loved the warm hospitality of the people and the way the smell of curry would forever make my mouth water like a Pavlovian dog. I loved the cows that would brazenly disrupt the flow of traffic, but yet were treated with such deference and respect anyway. I loved the wide-eyed, barefoot children that unashamedly stared at the tourists who didn’t look like them or anyone else they had ever met. I loved how everything took three times longer than it should and how nearly every transaction involved a careful game of negotiation. I loved how the oppressive heat would ever so subtly abate in the evenings and that the polluted air would give the sunset a stunning red glow. I even loved the sound of honking horns and the pungent smells of raw sewage (only in the sense that these were part of the clandestine experience, not because I’m a masochist). 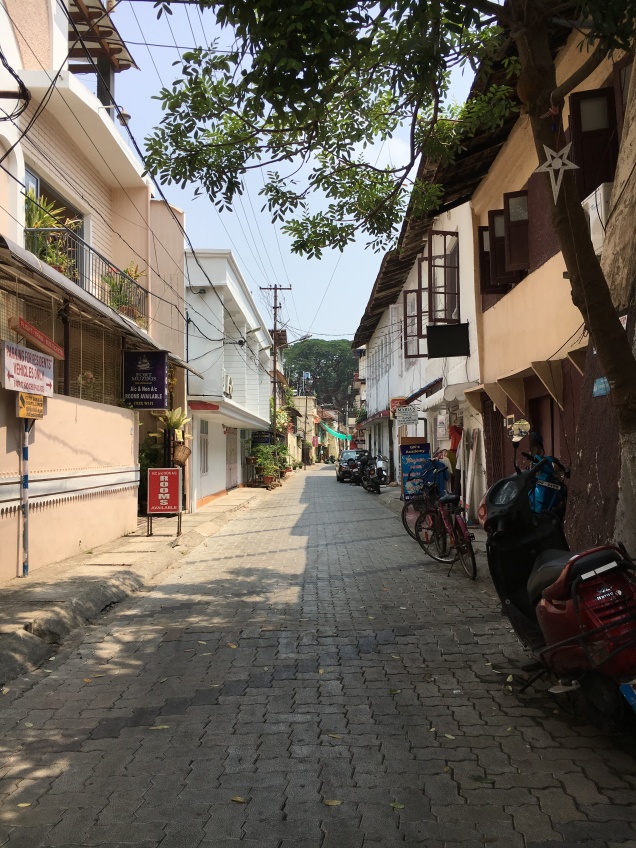 I woke the next morning with a text message from Jill. It was a lengthy diatribe of everything I had done wrong, why our falling out was entirely my fault, and basically she was sorry that I was such a miserable traveler and hadn’t enjoyed India. I was inclined to delete the message and forget about it (and her) for the rest of my life, but it was the baseless accusation that I hadn’t loved my time in the south that encouraged my response. I knew I wasn’t innocent; however, these things are rarely one-sided as she seemed to suggest. We were clearly not cut from the same cloth. We should have parted ways weeks ago or at least confronted some of our miscommunication before it was elevated to such an ugly level, but I was absolutely enamored with India. I had fallen in love with this place in spite of Jill. In fact, she wasn’t even more than a passing thought as I savored every memory. I absorbed all of the negativity that she felt compelled to type out in a message and let it dissipate during my morning meditation. There was no benefit to a rebuttal. She was irrelevant to my forward journey.

I spent the day at a local art exhibit put on by university students. The art expo was housed inside Aspinwall House, a British heritage property facing the sea that used to house a global trading company. I’ve never claimed to be much of an art aficionado, but the interior rooms had big industrial fans that made you forget, even for just a second, that you hadn’t felt air con in weeks…so it was kind of heavenly.

When I got back to Happy Camper, I saw that I had a message from Donal. He had arrived in Kochi and wanted to take me to dinner. I knew his intention was probably to make it a date, although he pretended it was casual. Nevertheless, I was in need of a positive vibe and I liked his company so I agreed. We ate at a seaside seafood restaurant. It wasn’t fancy unless you use the backpacker scale in which case it was five stars. They even served alcohol, a rarity. I remember laughing a lot and sweating and mosquitoes and the salty smell of the ocean and talking about where we might travel to next. I was flying to Delhi the next morning. Donal would spend more time in the south. It was a perfect evening.

The next morning I took an Uber to the airport, which I can now attest is a great way to get around India. It was early and there was no traffic. The driver drove as if he had just robbed a bank. He was playing music on the radio, but I could barely hear it. I asked him if he would turn it up. He said, “But it’s Bollywood music, madam.” I said, “Great! I love it!” With a big smile, he cranked his “Bollywood” music to 100 decibels and while the sun was rising to the east, I stuck my head of out the sedan and said goodbye to southern India…for now.