Out of all the places I had intended to visit in India, Varanasi gave me the most anxiety. Mystics and lepers, cannibal monks and seekers of death, people migrate from all over the world on sort of a death pilgrimage for the privilege of bathing in the Ganges to heal, to be absolved, to cleanse. Whatever the reason, I was sure to encounter many interesting characters here.

First of all, the Ganges River at this particular juncture is a slurry of sewage, garbage, and ashes of dead people, but strangely I didn’t think it emanated a particularly worse odor than any other beach, canal, or lake in the country. I couldn’t imagine how this was possible when you could literally see the charred human remains floating in snowflake patterns on the surface. Cremation is an important part of the Hindu death ritual and the burning ghats in Varanasi are in open view. When a person passes away, their body is wrapped in a shroud and draped with red and gold marigolds. The deceased is then set on a raised platform near the river when the male family members (women are not allowed because they are generally deemed to be “too emotional”) circle the body five times, holding a smoldering ember. The five circles are meant to symbolize the five elements – fire, water, earth, air and ether. Once finished, the body is ignited with the ember and can take up to three hours to be fully consumed.

I took a sunrise boat excursion with a tour guide. He paddled us to the middle of the lake to watch some of the morning rituals, including the dawn ceremony at Assi Ghat and the multitudes of people bathing in the opaque gray water. The sun burned through its orange halo as it rose higher in the sky. My guide bent over and scooped some water into his mouth, closed his eyes and seemed to meditate for a few moments, while I was transfixed and horrified by the tiny droplets of water stuck to his mustache. He shrugged and just said it was ok to drink the water because we were currently floating upstream from the burning ghat. 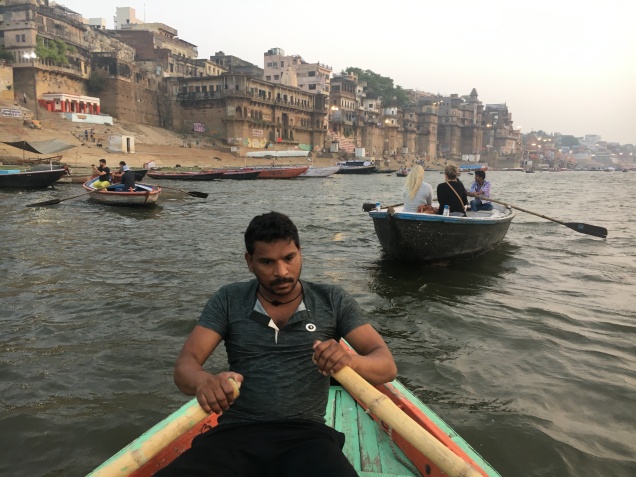 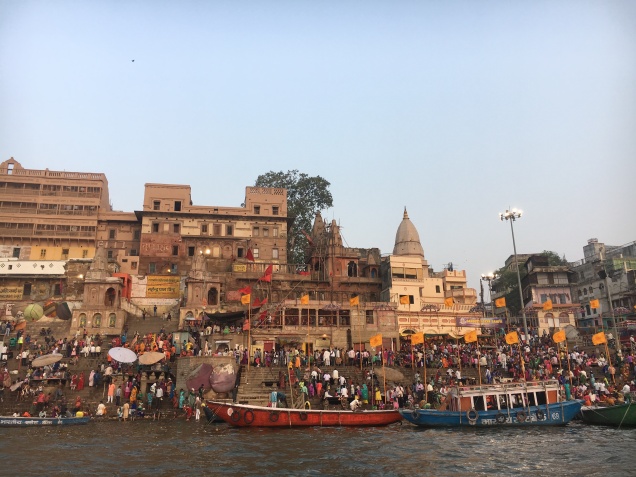 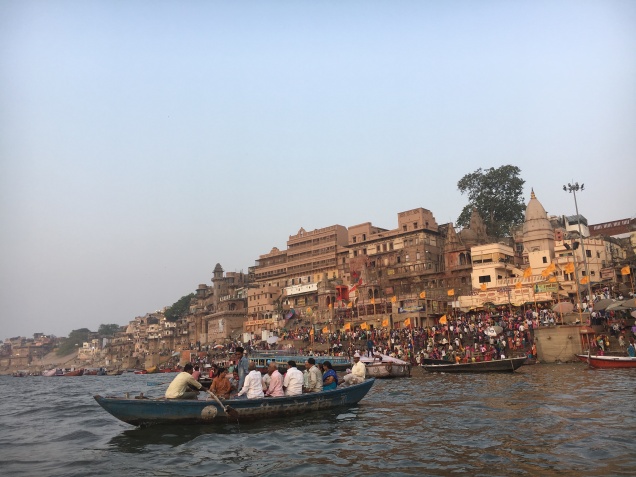 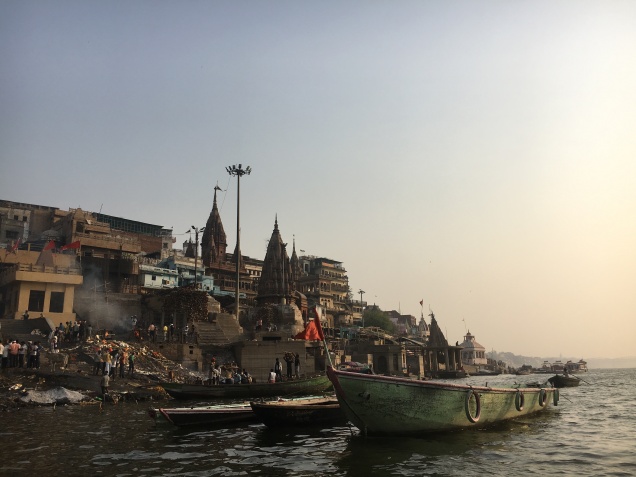 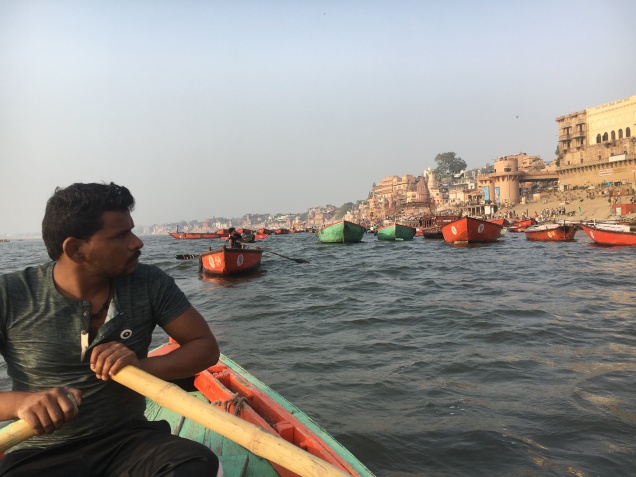 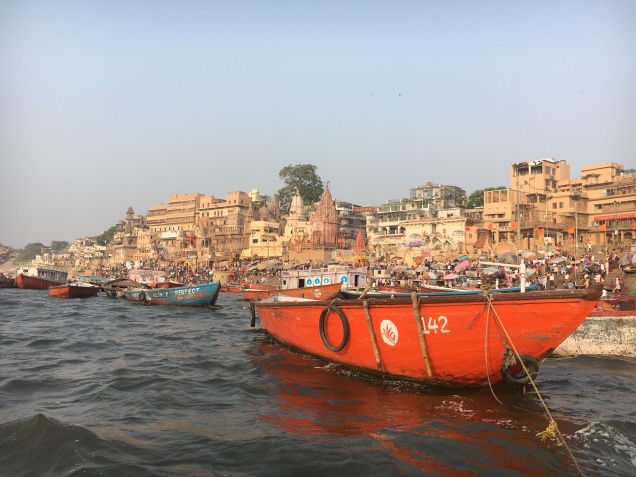 It may also be important to note that some people are not eligible to be cremated – pregnant women, children, lepers, snake-bite victims, and sadhus (a holy person) – so instead of burning these bodies, they are weighted with rocks and allowed to sink in the Ganges. These rituals are part of Hindu custom and are present in all parts of the country, but the significance of coming to Varanasi is paramount. Life and death are a constant cycle in Hinduism, where the soul is immortal and is reincarnated many times in an attempt to achieve divine equanimity. Varanasi is thought to be a holy city that liberates the soul, leads to “the path to the sun,” skips the endless cycles of life and rebirth. It is believed that Varanasi shines the way directly to nirvana.

From the river, looking back on the ghats swarming with souls seeking nirvana was magical. I felt wholly and totally at peace right in that boat. If it wasn’t for the rising mercury, I would have wanted to stay there all day.

Back on land, I walked up and down the ghats. Each one was different with unique significance. Dasaswamedh Ghat is the busiest and hosts the Ganga Aarti, the visually stunning spectacle of lights and dancing. Kedar Ghat, with its striped motif, includes a beautiful temple to Lord Shiva. Scindia Ghat is the sight of the sinking temple. Lazy cows ambled along next to me, their bells and floral or ribbon adornments swaying in a light breeze. It was incredibly serene and to my surprise, no one bothered me at all. By that, I mean no one tried to sell me anything or asked to take a photo with me. 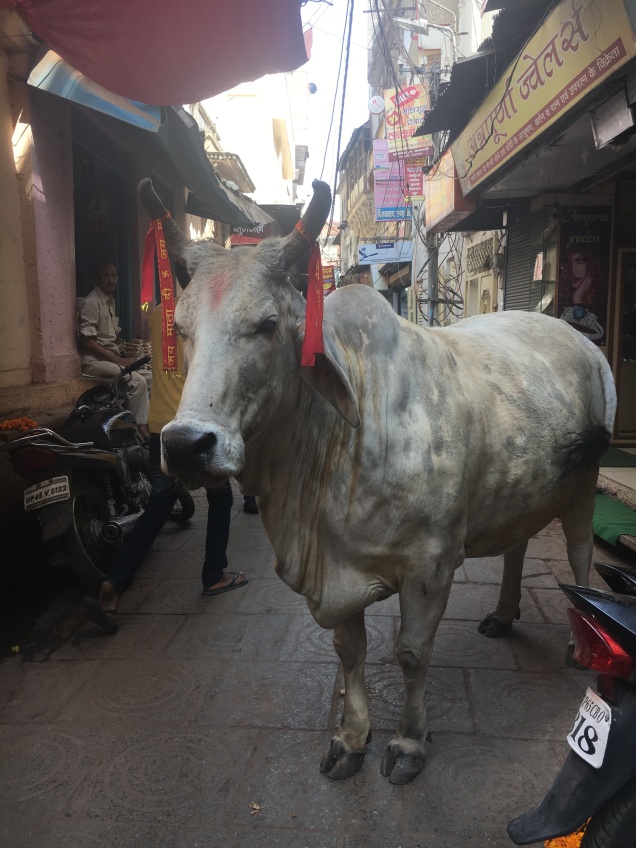 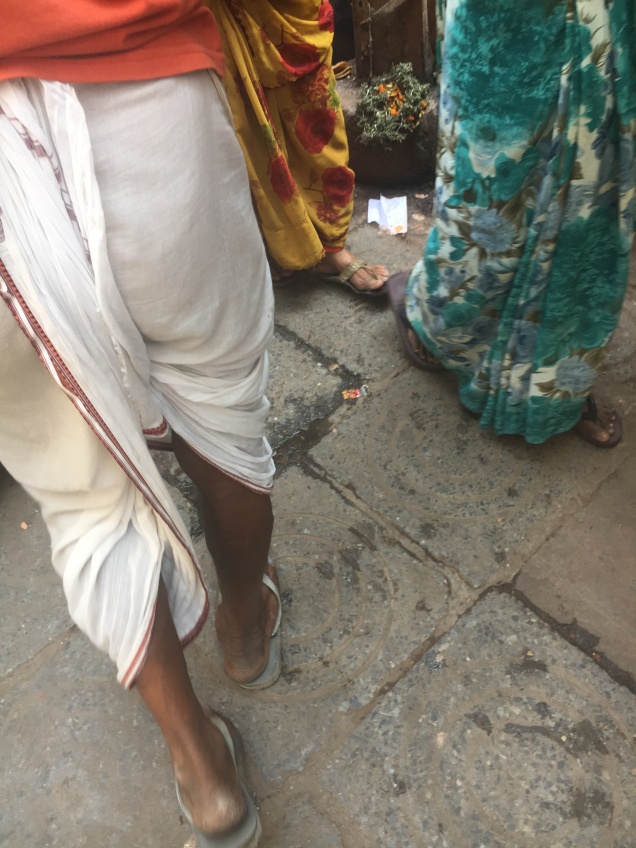 That afternoon, I did something I had started to think I would never do. I booked my flight home. It was still six weeks in the future and I still had three more countries up my sleeve, but this felt so final. I was in the hostel’s common area, a third of my body suctioned into a beanbag chair, when I hit purchase. There were others sitting on either side of me, probably watching YouTube videos or checking Instagram, having no idea of the gravity of what I was doing. The truth was I didn’t want to go home and I wasn’t so low on money that I felt desperate. I missed my family, of course, but the thought of going home made me feel so lost. Thick wet tears streamed uncontrollably down my face. What would I do when I got there? Would I fit in? Would I be able to adjust? Am I even fit to live a civilized life anymore and have a real job?

When I noticed that others were staring at me, I tried to affix a stiff upper lip and slunk off to the roof to wallow in pity alone. I had left some laundry out to dry and as I climbed the stairs, I sniffled and was wiping my eyes. The stairway lights were dim and I heard some scuffling on the landing above me, followed by a loud bang. My heart leaped into my throat and I immediately forgot the tears as adrenaline kicked in hard. I stopped and listened, but it was completely quiet. Did I imagine that? Should I turn around? I turned on the light on my phone so I could see better at just the moment that a rat the size of my shoe basically threw itself down the stairs and disappeared into a hole in the wall. I found this so fitting and so hilarious that I just sat down on the steps to let my heart rate return to normal and recognize how ridiculous it was that I didn’t want to leave here.

I had dinner that night on the top level of a restaurant overlooking the ghats. I sat on a pillow with a low table and ate a pizza of all things. There was an American guy, Chris, sitting next to me that said his wife was stationed in India as a diplomat so when she was busy on official business, he was touring the country by himself. He wasn’t authorized to work so he said he struggled sometimes to keep himself busy. I couldn’t even imagine feeling bored here.

Chris and I walked down to Dasaswamedh Ghat to see the evening ceremony, rhythmic chanting and smoking lanterns and chiming bells punctuated the ritual. A girl, who didn’t speak, took me by the hand and led us to an elevated concrete walkway where we could get a better view. She pointed to the river and I could just barely make out a few lanterns that were immersed and set afloat, illuminating the surface like little stars twinkling in a dark night sky. 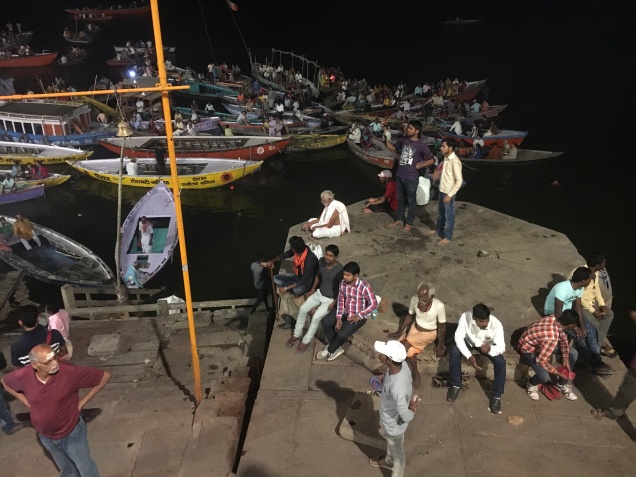