To anyone who has ever stood helplessly next to the luggage belt, scanning endless heaps of uniform black suitcases for your bag, and then realizing with sinking disappointment that it is indeed not there, I can now empathize. It was late, around 10pm, and I had left Kathmandu earlier that day on Malindo Airlines, a regional airline based in Malaysia. I had flown the 6 hours to Kuala Lumpur and my bag was missing.

This was not your typical lost luggage situation. This was a case where every single person on the plane did not have their luggage. The belt was empty, not even running. I had approximately 90 mins before I was transferring to an Air Asia flight to Singapore so the line at Malindo’s baggage office was a huge inconvenience. The crowd was quickly turning into a mob and the Malindo employees were assuring everyone that their bags would come on the next flight first thing in the morning. It had been a weight issue, they said, so they had simply taken all of the bags off the plane and sent us all without our belongings. I pushed my way to the front, explaining that I was transferring to another flight and then another and another. Within the next 36 hours, I would be on another continent and would have flown with four different airlines on five different flights. I had limited confidence that I would reconnect with my backpack at all if I didn’t get it back before I left KL. The clerk filled out a form with a 5-digit claim number and said to check in with my final destination. He smiled and assured me that my bag would be sent immediately, all while I knew he could make no such declaration.

In hindsight, I wonder if I had just missed my flight to Singapore and waited for my bag if it would have saved a huge headache that lasted for the next month, but I’ll never know. I had 6 hours in Singapore before boarding an Eva Airlines flight to Taiwan. I continued calling Malindo’s office from Singapore to verify the status of my bag, but no one would pick up the phone. Eventually, I started to make peace with it as I ran through everything that was lost. I knew every single item as I had so meticulously packed and repacked every item no less than 785 times since I had left home 785 days ago. None of it really mattered that much. My biggest loss would be my contact lenses. I only had one replacement in my carry on, but I wouldn’t even be able to get new ones without a new prescription from the ophthalmologist.

I flew from Singapore to Taiwan to Houston on Eva Airlines, a Taiwanese carrier. I landed in Houston around midnight. It was my first time stepping foot in the States since I had left more than two years earlier and I had now circumnavigated the globe, albeit in a zig zag kind of way. The moment felt a little surreal, hearing a security guard speak with a thick Texas twang. My internal clock was completely thrown off, but at midnight, I was completely starving. Imagine my disappointment that the international terminal where I had landed was completely shut. The only food options were Cheetos or M&Ms in a vending machine. A taxi driver with a slow drawl offered to drive me to a Burger King outside of the airport for $30 round trip. Ah, welcome to America.

I survived on vending machine sustenance and no sleep, calling United Airlines for most of the night, hopeful they could help me track my backpack. The final leg of this flight would be to Belize City on United so they would ultimately be responsible for receiving my pack if it ever arrived. When I finally boarded this short flight to Belize the following morning, the other passengers were vacation jubilant. They were wearing sundresses and shorts and sandals, carryons stuffed with bikinis and sunscreen. I was wearing baggy long pants and hiking boots because the last time I had changed my clothes I had been in Nepal. My carryon contained a fleece jacket. 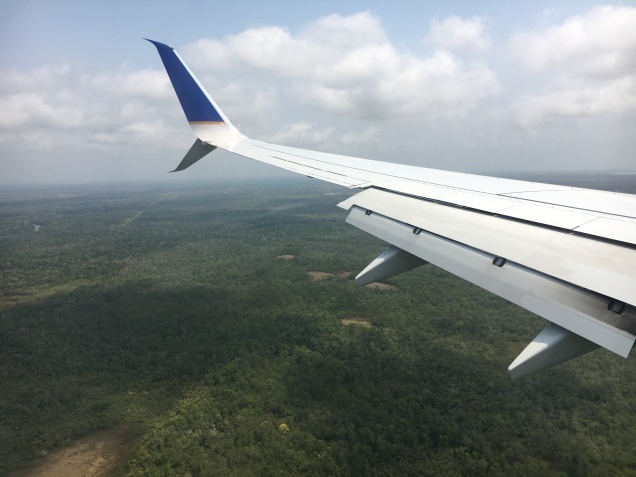 Over the next 4 weeks, I would continue traveling in Central America, but my bag never showed up. I made countless phone calls, staying up in the middle of the night trying to reach Malindo during their daytime business hours. None of it was really that valuable besides the contact lenses, but the sentimental attachment was strong. I tried to utilize my insurance company, World Nomads, to do the legwork for me. They made calls on my behalf at times and eventually arranged for my backpack to go to Florida via Germany and New York after it had been missing for 29 days. In truth, they were great and gave me a nice allowance for replacement clothes and cosmetics with little hassle. This loss couldn’t have happened at a better time if it was going to have to happen at all. I had learned that I didn’t need much to get by and that being a minimalist is actually a much easier and less stressful way to get around. Now if I could just ditch these long pants and hiking boots in the tropical climate of Belize, I would be set.