A French woman in the queue in front of me examined her Louis Vuitton luggage, about five bags in all, noticing a small scratch in the handle. Her body language and pointing indicated that she was blaming the porter who had delivered her family’s luggage to the ferry terminal. I looked around me at the families donning ridiculous cliché resort attire and the honeymooners in various stages of physical affection.

“The ferry better leave on time. I want to get to the resort before the spa closes.” We are scheduled to leave on time, ma’am.

“I hope it’s not too cramped.” The ferry will be full, sir, but I assure you that there is enough space for everyone.

“I don’t like the way they are stacking the luggage. Do you think it will stay dry there in the back of the boat?” Once the bags are secure, they will cover them with a tarp. Not to worry, miss.

Most of the ferry’s passengers were either French or Seychellois so these were only a few of the comments I could understand from English-speaking tourists. My instinct was to be embarrassed by the demands of first-world visitors, but this was a first-class destination that attracted a specific class of tiresome globetrotters and the ferry’s crew was accommodating their complaints with a degree of patience that was not deserved. I was the one that seemingly didn’t belong here.

We set out for the island of Praslin exactly on time and arrived exactly on time. The air conditioned boat was complete with a premium-stocked bar and a B-rated movie during the one hour transfer. The seas were calm. You could make out a blurry view of the neighboring islands through the condensation on the plastic windows. The whole episode was lacking drama, to the chagrin of my fellow vacationers.

A taxi deposited me outside the Palm Beach Hotel in Grand Anse. The colonial-style pale yellow hotel was adorned with white lattice in an open-air lobby. You could just see the white sand beach beyond the swimming pool on the other side of the reception desk. Hotel guests sipped champagne on their balconies, staring off into the ocean. Could this be right? I double checked the address of my AirBNB as I clumsily tramped through the lobby toward the reception desk, taking care not to let my backpack knock over an antique vase. The receptionist assured me I did indeed have a reservation, even as I felt like everyone was staring at the bedraggled backpacker with sun-bleached stringy hair and ripped jean shorts. In reality, no one cared or noticed me at all; I was as invisible as the staff. I was led up three flights of stairs, the last one being a tight narrow staircase, and into a cramped dark room with questionable air con. This was undoubtedly the maid’s quarters. I immediately felt at ease, realizing at some point I had become uncomfortable at the prospect of luxury.

It was true that I somehow had secured an undesirable room at a reasonably fancy hotel. The Palm Beach Hotel was located on the west side of Praslin in the administrative district of Grande Anse, also the longest beach on the island. In the evenings, the sunsets were almost indescribable. They would start as an ordinary sunset, becoming more vibrant and magical, taking over the horizon in every direction. It was also at this time of day that the tide was lowest and the water was too shallow for anything but wading or fishing. There was a large French family occupying at least half of the 13 rooms at the property and the young children were taking over the pool so I was effectively pushed out, but I didn’t mind to explore the rest of the island so I never saw much of Grande Anse during the day. 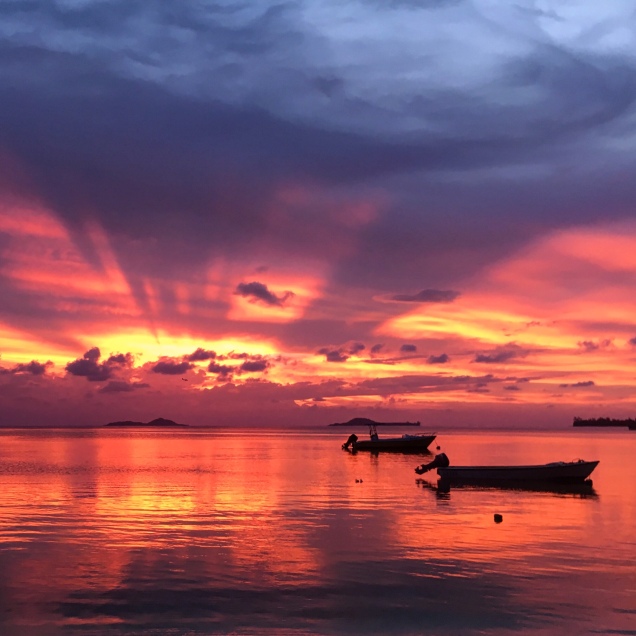 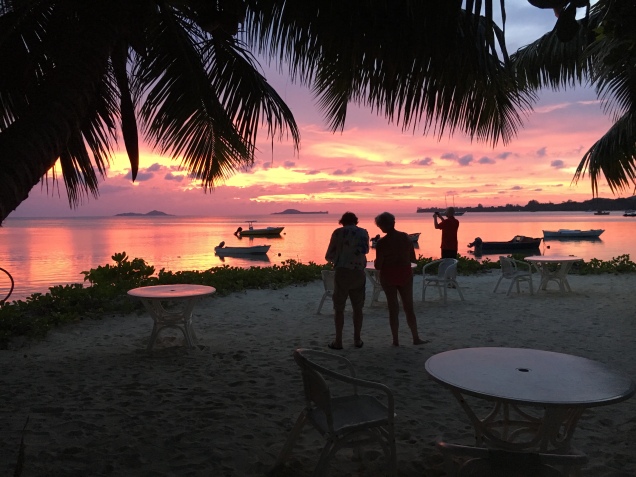 A buffet breakfast was included with my room and I settled in to the open-air dining room where I could enjoy the gentle sea breeze as I made a plan for my day. The server brought me pineapple juice and coffee and a plate of fruit, some of which I had never seen before. He asked how I would like my eggs as he dropped off some condiments on the table and I buried my nose in my iPad. Out of nowhere, a small vase with a single flower that was a centerpiece on my table fell over. Like dominoes, the vase then knocked over the thin water glass, soaking the white tablecloth with ice water. The whole episode startled me, but I picked up the vase to examine it and was puzzled how it could have fallen over. Meanwhile, the server returned with a cloth to mop the water and placed a small plate over a dish of butter. “You must be careful of the birds,” he told me. That’s when I noticed these tiny innocuous brown birds were dive-bombing the dining room to steal pats of butter, leaving wreckage in their wake. My relaxing breakfast was no longer. I ate my eggs hunched over in a protective posture to keep out any unwanted aggressors.

Praslin arguably has some of the best beaches of anywhere in the world, one of which, Anse Lazio, is consistently labeled as such. There was a bus stop directly in front of the hotel and unlike Mahé, the buses just continued back and forth on the island rather than commencing from a central bus terminal. It was a relatively straight shot to get there and the traffic was much lighter than on the capital island. The road tapered off to a narrow dirt path almost a mile from the coast and the bus was unable to continue so the passengers disembarked. Passing rows of coconut palms with big sweeping fronds shading the walk, the fine white sand beach opened up to the turquoise sea and smooth boulders framing the landscape. It was idyllic. 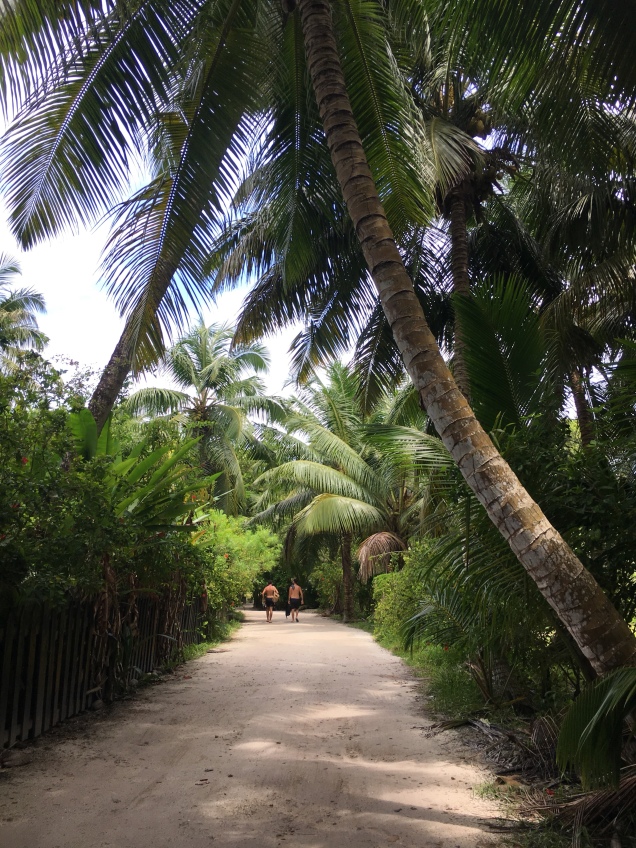 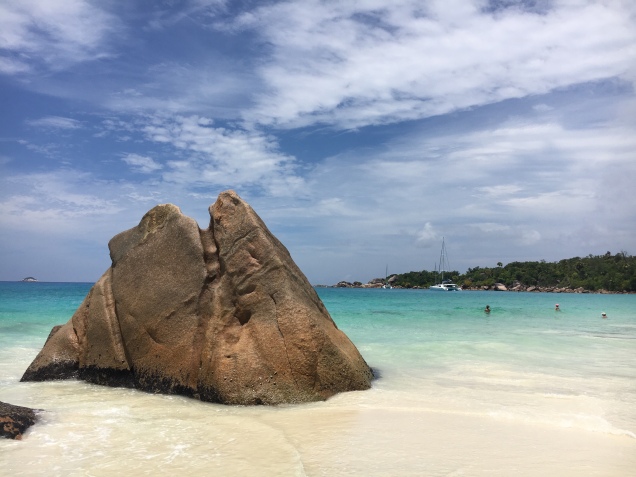 After a couple of hours beaching it, as you do, I started a slow stroll toward a viewpoint I had noticed on my map. I reached the edge of the beach, which was obstructed by boulders, but I climbed over them, regretting my bare feet and lack of pockets for my camera. On the other side, a rocky hiking trail led up the side of a hill. Obviously, it made perfect sense to keep going wearing nothing more than a bikini as the mosquitoes swarmed hungrily overhead. The smooth rocks gave way to sharper edges, yet I pushed on, ignoring the armies of ants that marched over my toes. The viewpoint was obstructed by trees and only a glimpse of the beach was visible. My bloodied feet prevented me from climbing further, but I sat for quite awhile soaking in the isolation and staring off into the ocean. No one else seemed to have found this path. The primal nature of my almost bare body so connected to nature was restorative and empowering.

The next day I visited the UNESCO site, Vallée de Mai, an inland nature park that conserves the island’s endemic palms, coco de mer, and the Seychelles black parrot. The seeds of coco de mer are the largest in the world and even an empty seed pod that was available to touch was quite heavy. A fresh seed that might fall out of a tree would be enough to kill a grown man if it were to land on his head. A few hiking paths meandered through the small park, but the lack of breeze for being away from the coast, turned the area into a sauna. It was a feast for mosquitoes that sent me running back toward the beach. 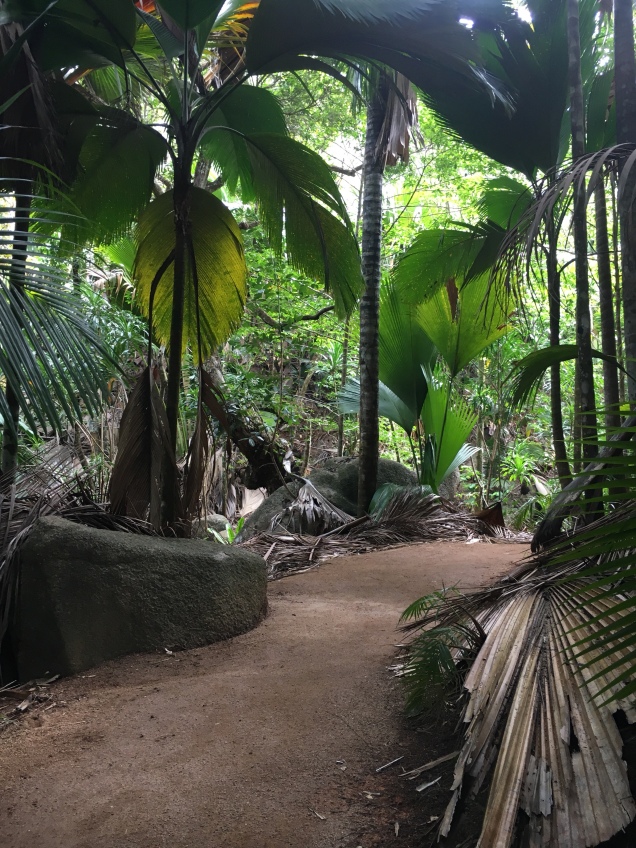 Luckily, I had arranged for an afternoon at Anse Georgette. This was a private beach affiliated with Constance Lémuria Resort, a five star slice of luxury on the northern part of the island. In order to utilize their beach, you just needed to make a reservation. The resort wanted to keep the beach as private as possible so that it wouldn’t become overrun with tourists. I took the bus to the resort’s entrance, checked in with the security guard and walked down a well-manicured service road, past the golf course, around a lake, through a thick swath of palms, and finally arrived at a quiet beach. I admit it was nice and less crowded than Anse Lazio, but I wasn’t sure it was worth the trouble, especially when a large tourist boat pulled up just off shore and all of the passengers just swam to the beach. So much for the privacy! 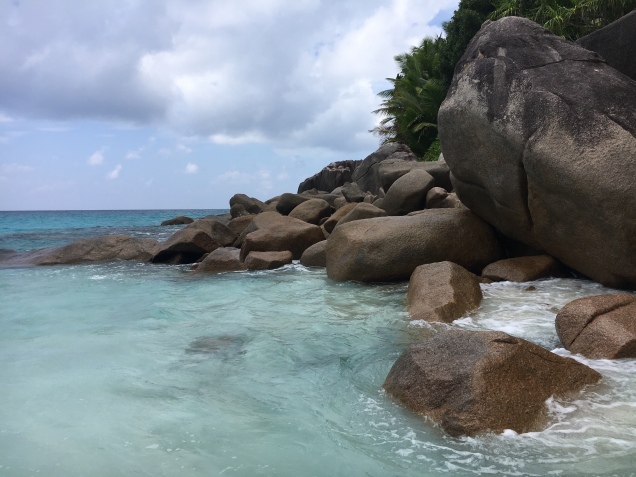 Praslin was much more captivating than Mahé. It was relaxed like an island paradise should be and I was beginning to feel like a tried and true beach bum, which is why I spent my last day on a day trip to La Digue. La Digue was only a 20 minute ferry from Praslin and was unique in that motorized traffic was prohibited. Tourists and locals alike would commute on bicycle. La Digue was much smaller than Praslin so with wind in my hair, I cycled from one end to the other, admiring the interior landscape as well as the coastline. 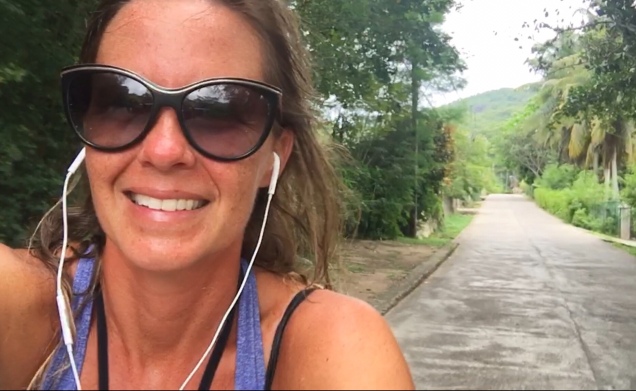 I parked at a secluded beach on the southern side of the island, keen for a dip in the ocean. The waves were intense, too intense for my liking. I knew from the map that this beach connected to two others via a steep walking path up and over some mountainous terrain. This time I had shoes, but I willfully chose not to wear them. There was something about bare feet that made the walk more purposeful, every step required presence of mind, akin to a meditative state. Both of the adjoining beaches, Petite Anse and Anse Cocos, had equally roiling waves that kept me only knee deep, but it didn’t matter. I closed my eyes and let the warm water crash into me over and over again.

On the morning that I was due to leave the Seychelles, I ferried back across the channel to Mahé. Still on board the ferry, I watched dark clouds sweep over the interior mountains and unleash a monsoon of epic proportions. Timid passengers stood in the doorway, waiting for a slight lull before they would dart across the 10 meters to the cover of the terminal. Almost comically, the luggage was set in the open under a flimsy tarp and every time someone would search for their bag, the tarp would lift and expose all of the luggage to the downpour. The woman with her Louis Vuitton bags was yelling at porters as she tried to shield herself from getting wet. The entire crowd pushed and shoved under the terminal awning, angling for position, until I just gave up. I stood in the rain, directly next to the hull, until I spotted my backpack. It was soaked. I, for one, was thankful for nature’s shower to give her a good bath before the next leg of my journey.