With the holidays, it’s easy to begin feeling homesick, like nothing is familiar.  You are glad to be where you are, in tropical temperatures, where everything is new and exotic, but you wish that you weren’t alone.  So then it was perfect timing to be joined by two of my favorite people!  Ryan and Wendy flew from Chicago on Christmas night, across an ocean, in coach seats, first to Bangkok and then to Chiang Mai to join up with me a few days later.  I’m feeling like a lucky girl!
I met them at their hotel after they had so graciously offered me a place to sleep.  I didn’t even care what we did, I was so excited to catch up and explore the city with friendly faces.  None of us had much of a plan as to what we would do with our time, but Chiang Mai is chock full of opportunities and there was no chance of being bored.  The Chiang Mai Womens’ Prison Massage had come highly recommended as THE place to get a massage in the city.  There are hundreds, if not thousands, of massage boutiques in the city alone, meaning there are lots of other places that don’t have the premium prices and touristy feel of this one.  However, I was a sucker for the novelty of the Womens’ Prison and it didn’t take any convincing for Wendy and Ryan to agree.  We had to go.

Allegedly, the women had all been released from prison and had been trained in the art of traditional Thai massage as an alternative to their criminal lives in the past.  Keeping in mind that what may be considered a crime in Thailand is not always as sinister as the crimes might be in the western world, none of the women struck me as hardened criminals.  As is customary, we were each given some loose cotton pants and a button down cotton shirt to wear before we were led into a large room with beds packed tightly together.  The massage was wonderful, as always, as pressure points are used to release tension in various muscles and your body is contorted into unnatural positions through assisted stretching.  The distracting part is that the women giving the massage are so close in proximity to each other, and perhaps a bit bored with their job, that they talk and laugh and giggle amongst themselves for the duration and you begin to wonder exactly what they are finding so funny when they have your back arched and pulling your feet toward the crown of your head….

Nevertheless, the massage was a special start to a whirlwind tour of Chiang Mai for Wendy and Ryan.  Overall, we had a very loose agenda and I was happy to discover their morning pace was on par with mine – slow and steady.  I don’t know where my mornings go exactly, but it usually involves a hot coffee and a leisurely breakfast, checking email, some Spanish lessons, and a rare workout.  This time, my dear friends even got me back in the gym that I have missed so sincerely but we certainly took our time in getting there.

I let my friends drive our chosen activities, but I wouldn’t have changed a thing.  I have a bit of an obsession with Big Cats, that is to include, among others, lions, leopards, cheetahs, jaguars, and tigers so when we decided to go to Tiger Kingdom, I was slightly apprehensive.  Tiger Kingdom is a tiger attraction where you can pay a hefty fee to go inside of a cage with a “tame” tiger to touch it, play with it, and take your photo with it.  This is a highly controversial activity and I don’t wish to debate the merits of the ethics of doing so. BUT I will say that I was apprehensive for two reasons.  Because I do care for the animals and I would never want to see them treated poorly or drugged (as does happen in Asia), I investigated this particular facility and it seemed to be a good place.  While there, I witnessed large tigers that were alert and responsive, playful even.  I witnessed handlers that truly seemed to have a relationship with the animals and did not treat them roughly or aggressively.  No, I don’t especially agree with the premise of the felines being exploited for our entertainment, but these particular tigers are not fit to live in the wild.  While not as acceptable as living in a sanctuary (of which there are not near enough with capacity), if they are treated humanely, I consider it a better fate than death.  In full disclosure, I learned that they are breeding tigers at Tiger Kingdom and this practice I do not agree with in any way. As a rescue facility, I was able to hold it in higher regard, but I did not learn of the breeding program until later. 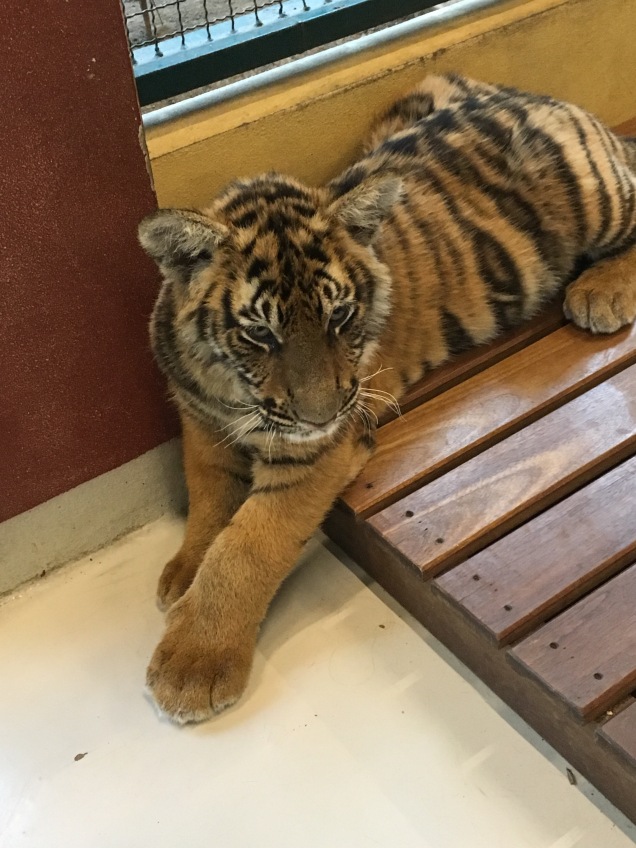 The second reason I was nervous was because tigers are wild animals and if, in fact, the tigers are not drugged, then I find it incredibly dangerous and wreckless to go inside a cage with an adult or even an adolescent tiger.  They are unpredictable and their natural instincts can take over at any time.  And because of this, it is exactly the reason we were keen to wait twice as long to visit the smallest tigers, those that are no older than three months.  When our turn came, after a nearly three hour wait, Wendy, Ryan, and I removed our shoes and were led inside of the nursery.  There were three cubs, taking a bit of a “cat nap,” sporadically active, each attended by its own handler.  Taking turns, we each had the opportunity to pet them, snap some photos, and experience the thrill of being so close to one of nature’s most powerful predators.  Obviously, our instinct is to be gentle so as not to aggravate the snoozing cubs, but the handler instructed us to be firm when touching them.  The tigers often mistake a gentle touch as a fly or a similar kind of nuisance, one that can easily be batted away with a large paw or a flick of the tail.   I was happy to see the facilities were clean and well-maintained and specifically, the nursery was spacious and open on the top.  These are truly beautiful and magnificent creatures.

Upon our return back to Chiang Mai, there was little time to spare before we were due for our cooking class at Asia Scenic Cooking School.  I love to cook, but I had yet to take a cooking class on my travels.  Thai food, one of my favorites, seemed like a good place to dive in!  Asia Scenic was extremely professional and organized.  The class began with a tour of their organic garden and an excursion to the local market, but then we were allowed to choose from several categories and were schooled in five different dishes.  We were all taught to make spring rolls and a curry, but then we were allowed to individually make a few other specialities.  I chose Phad Thai, the most common, yet apparently one of the hardest Thai dishes to master.   Thanks to the wine we had procured at the liquor store before class (who can go to a cooking class without wine?), I was a bit of a sloppy cook, but the results of our meal were delicious and fun,  with only a little bit of hard work!

For our last day full day in Chiang Mai, Wendy and Ryan were intent on some trekking.  The trekking options were somewhat ambiguous and it was unclear what might be the best choice for a day trip.  Even though we specifically said we wanted to hike, the tour outfitter recommended a day trip to Doi Inthanon National Park.  We didn’t know any different so we paid our fare, hopped in the sedan with our “English speaking” guide, and were on our way.  Driving about an hour or more into the National Park, we were weaving up and up higher into the mountains.  Out the window, we could see people wearing coats, gloves, hats….considering we were dressed in shorts and tank tops, it seemed obvious we had missed the memo about the temperature change.   Our first stop was Thailand’s highest point, amidst the clouds, a temple that was more than a bit crowded with selfie-taking Chinese tourists.   The air was brisk so we quickly ran around the boardwalk pathway to keep from losing body heat.   Not what we had in mind.   The second stop included two more temples on a hill, his and hers, King and Queen.  The surrounding gardens were nice but still no hiking in sight.   The third and final scheduled stop was to a waterfall, which wasn’t completely disappointing, except that we drove straight to the base of it.  No hiking.

Feeling disappointed with our anticipated hiking adventure, we repeatedly asked our guide if there would be hiking.  Could he take us somewhere with a short trail?  Communication failing, we went to another sad waterfall before our guide admitted that he was a “Chinese speaking” guide and seemed to be trying his best to find something we would like.  He said something in a thick accent, asking if we would like to see a different temple.   I looked at Ryan, “Did he say Sewer Temple?”  With a shrug, Ryan said, “I thought he said Seaworld.”  Knowing that wherever we were going was back toward the city and would end this lackluster tour for the day, we all agreed that yes, we would please like to go to the Sewer/Seaworld Temple.  Just back inside of the city limits, we pulled into a parking lot of a metallic shiny ostentatious temple.  I believe Wendy was the first to speak, “Ohhhh, the SILVER Temple!,” prompting all of us to burst into laughter.  And wouldn’t you know it, but women are not allowed inside the Silver Temple so Ryan was given a tour all alone before our day of NOT hiking drew to a close.  No matter, the silver misunderstanding had staying power and kept us amused for days.

Chiang Mai was a wrap for now, but I didn’t have to part ways with my friends quite yet.  We were all flying to Koh Samui to spend NYE on the beach, me flying to Bangkok, overnighting in the airport, and continuing to Koh Samui the following morning.  They would be flying like civilized travelers, on a direct flight, in 90 minutes time.   Oh, the things I have done to save a buck!