In hindsight, it’s incredibly interesting to me how many restaurants in San Pedro de Atacama have fish on their menu.  San Pedro is located in the middle of the highest, driest desert on Earth, the closest ocean being several hundred kilometers away through mountain roads (and this is South America, refrigeration and OSHA standards are not exactly a priority).  This is my view in hindsight.  My reflection came while I was laying in a run-down hospital bed, a hospital without soap or a functioning light in the bathroom, a hospital without a doctor.  I was waiting for the IV fluid to replenish my severely dehydrated body.

The series of events that led me to that hospital room seemed ordinary enough.  My bus ride from Salta to San Pedro climbed to a peak height of 4810 meters (15,780 feet).  Immigration between Argentina and Chile was located in the mountain town of Paso de Jama very near this peak height.  On a bus full of gringos, who had no idea the altitude we had reached, we all hopped off to go stand in line to clear customs.  Prone to altitude sickness, within minutes I started feeling dizzy to the point where I needed to lean against the wall.  I noticed men in orange coats were coming from a back room and tagging people out of line and taking them away.  Then there was some commotion out of my line of sight, when an orange-coated man came running with a wheelchair.  Someone had fainted.  The next bit is a little fuzzy, but the next thing I knew I was ALSO being helped into a wheelchair!!  I was taken to a medical room and hooked up to an oxygen mask, just one in a line of about 10 other travelers who had been showing signs of altitude sickness.  Apparently, this occurrence is so common at this particular immigration point that they staff medical personnel to deal with the fainters.

After that embarrassing episode, we continued to San Pedro de Atacama on a downhill trajectory.  My hostel reservation had been cancelled that morning due to an overbooking so when I arrived, I had a throbbing headache from altitude and was incredibly thirsty, yet I had nowhere to stay and I had to carry all my luggage around in the desert heat trying to find somewhere to sleep.  After 6 tries, I finally found a place that had availability and I collapsed into bed.  Some people I knew were also in San Pedro and I wanted to connect with them to find where they were staying.  As circumstance will have it, my chosen accommodation didn’t have wifi so I gathered myself and wandered into town hoping to find a restaurant with a decent internet connection.

And this series of events brought me to the moment when I was sitting in a restaurant, not feeling even a little bit hungry, but knowing I needed to order SOMEthing to be able to use the wifi.  Several days in a row with unhealthy options and my fainting spell earlier in the day, the salmon just seemed like the best choice.  Seemed like it anyway.  24 hours later I was in the hospital attached to an IV, being judged by all the locals that just shook their heads.  “You ate salmon….in the desert??”

Glad to be recovered after 2 full days in bed, I wanted to make the most of my remaining time in Chile.  There are so many options of activities to do in San Pedro, it was hard to narrow down the choices.

First up was a trip into Valle de la Luna and Valle de la Muerte.  It’s possible to ride into Valle de la Luna by bike from San Pedro, but due to the earlier events in the week (and the fact that I don’t like biking), I did the less strenuous version of going by van. The former, Moon Valley, gets its name from the moon-like landscape, reminiscent of another planet.  And the latter, Death Valley, proved to be the perfect place to watch the sunset. 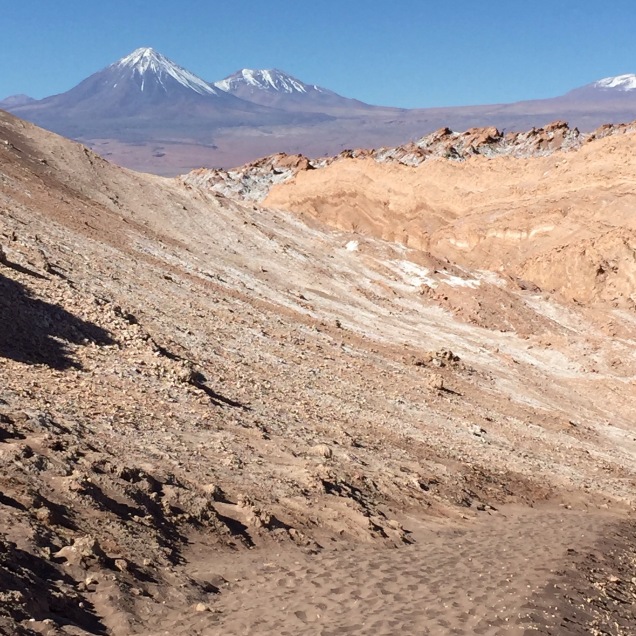 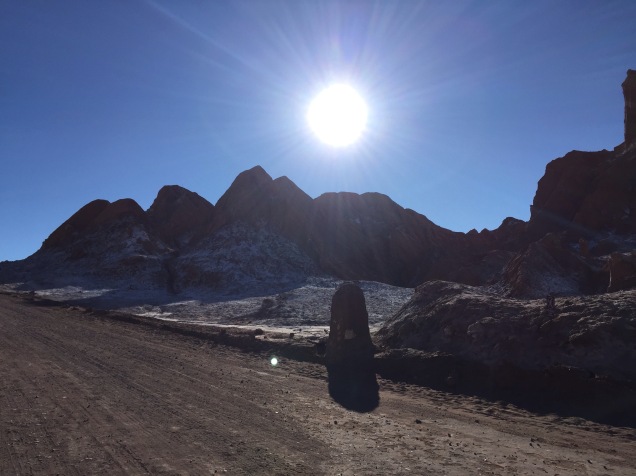 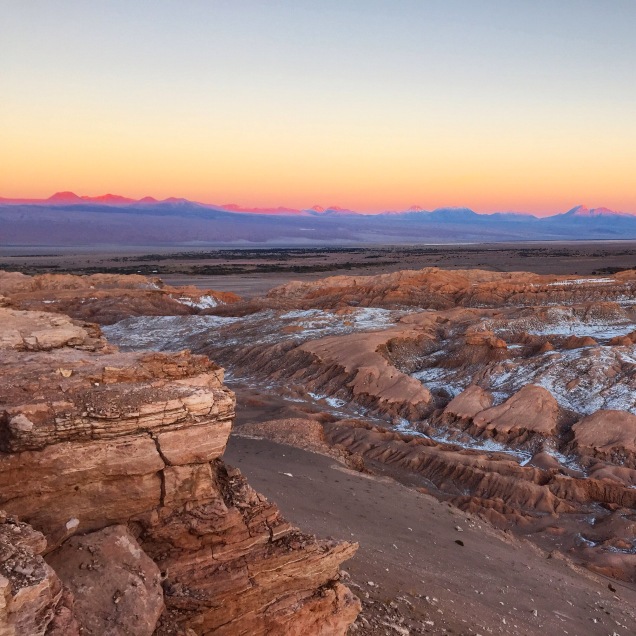 The next day, I made a day trip to Laguna Cejar, a salt water lagoon with 10 times more salt than the ocean. With the high salt content, floating around in the lagoon was a really relaxing way to spend an afternoon.  We also made a stop at Los Ojos del Salar, two pools (like eyes) that offer the perfect reflection in the calm water, and a view of another sunset, like only the desert can offer. 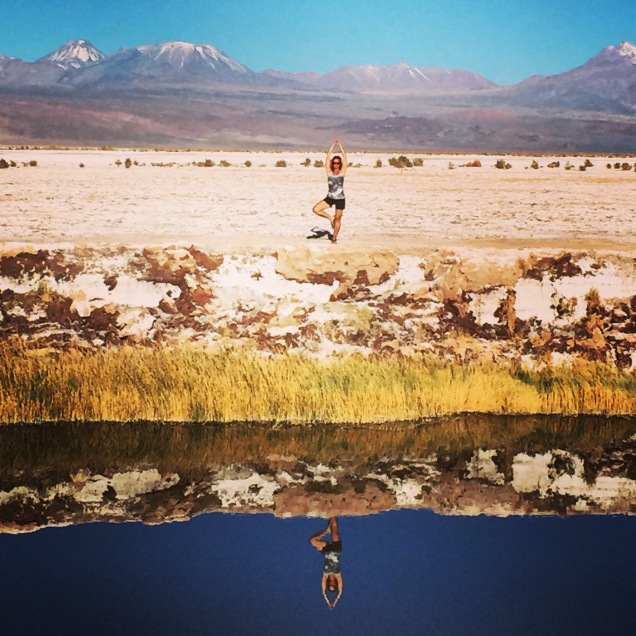 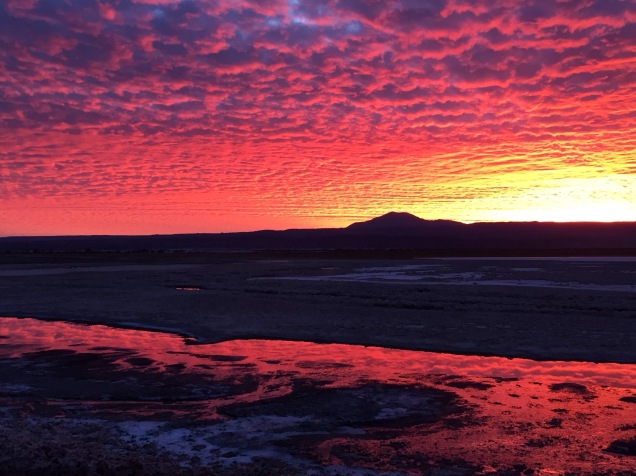 My last day in San Pedro, I awoke at 4:30am for an excursion into an even higher elevation and colder temperatures to witness El Tatio Geysers letting off sulphur-scented steam.   Individually, the geysers were overall a little disappointing, but because there are so many of them in one spot, collectively, the geysers were quite a sight.  With a final stop on our return trip to taste llama skewers and fresh sopapillas, my final day in Chile was an introduction into what I could expect in Bolivia.  Two months after starting my journey, the time had come  to cross yet another border. 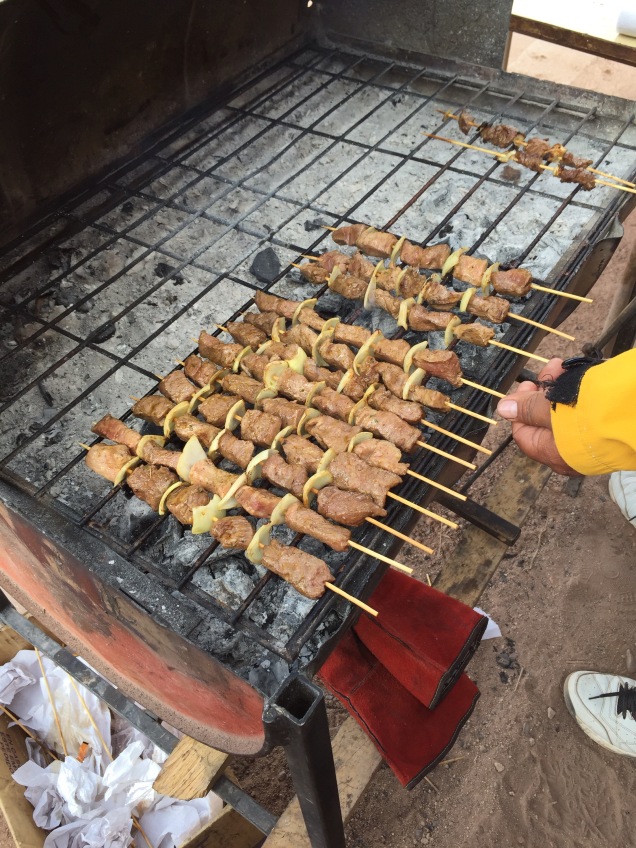 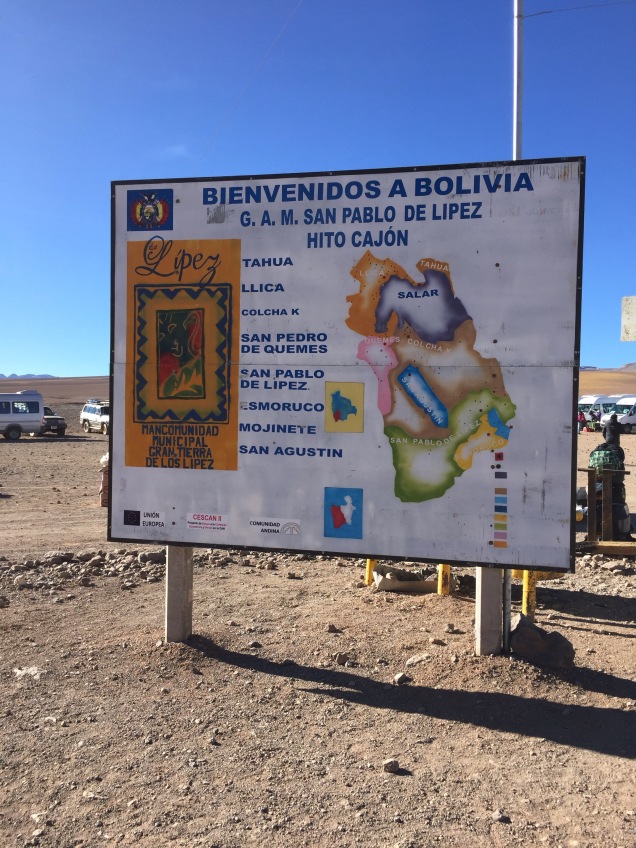