On Christmas Eve, I was trying to sleep on my rock hard bottom bunk when the dorm door creaked open and some drunk whispers and giggling filled the room.  I turned my back to the roommates with the intention of ignoring them.  A few minutes later, I realized they were in the same bed and clothes were starting to hit the floor.  “Oh, please no!,” I sighed.  Making my best attempt to show that I was, in fact, awake, it became clear that they just didn’t care.  Completely disgusted with the situation, I left the room for almost an hour only to return and discover nothing had changed except 3 more people were in the room apparently sleeping through this porn show.  I went back to bed, but turned my lamp on and started to read my book.  This tactic seemed to work – they finally gave up and passed out in a tangle of blankets and extremities.  Merry Christmas to me!

On Christmas morning, with 3 days to kill before friends from Chicago were due to arrive, I made it my mission to find another place to sleep….and quickly.  I decided to go on an overnight trek in a “non touristy” area.  This would be a treat for me for Christmas!  After telling the hostel that I would not be utilizing the additional 2 nights I had already paid for and explained why, the poor girl at reception offered to intervene.  She was willing to confront the exhibitionists on my behalf. A nice offer, but no thanks.  In an attempt to salvage what they presumed would be a bad review from me, they offered me a private room for that night before I left for my trek the following day.  The room belonged to their housekeeper so it was lived-in, to say the least.  Family photos and dirty laundry littered every piece of furniture.  A significant layer of dust made it clear that the housekeeper was not such a good one.  I spent Christmas night nestled into a sunken old mattress with a throbbing upper arm from where I had received a Japanese Encephalitis immunization earlier that day.  Yes, I voluntarily got a jab on Christmas Day.  I was determined that the trek would improve my weekend!

I was picked up in a songtaew, a pickup truck with seats in the back.  There were already 4 attractive guys in the back.  Not such a bad way to start!  Four MBA students from Wharton, Andrew, Bill, Colin, and David were on a 3-week whirlwind tour of Asia.  They turned out to be great fun, if not because they reminded me of people I may have been friends with in my other life back home.  We picked up an Argentinean family with 2 young daughters and we were on our way into the jungle.  The first day, I immediately noticed how hot it was.  A sauna, if you must know.  I’m not accustomed to trekking in warm weather.  Thinking back, I’m not sure I ever have.  Every trek I could recall had cool temperatures.  We stopped early in the day for a dip in a waterfall.  The waterfall itself was mundane as far as waterfalls go, but nevertheless, it was extremely refreshing.  Two things happened at the waterfall.  Andrew stepped on a piece of glass and did a number on his foot – so much blood!  Trekking for two days on a foot that probably needed stitches was not going to end well.  The other thing that happened was we acquired a pack of dogs, two of them fighting to be alpha, but all of them protecting us from I don’t even know what.  It seemed normal that the dogs must follow every group of tourists, probably hoping for a handout.  What wasn’t normal was that we also had a puppy.  One of the Argentinean girls couldn’t part with it and against the explicit instructions of our guide, she carried the puppy far enough away from home that we had to keep it.  She named her Casey.

The trekking itself was not incredibly difficult but the heat spent all of our energy.  At one point, our guide lagged behind only to return a few minutes later holding an odd-shaped rope out from his body.  I say it was odd-shaped because it wasn’t hanging exactly straight like you would imagine a rope would hang.   Oh my, that’s because it’s not a rope!  The silvery snake was still a bit coiled in spite of the machete that had so easily sliced through its head. 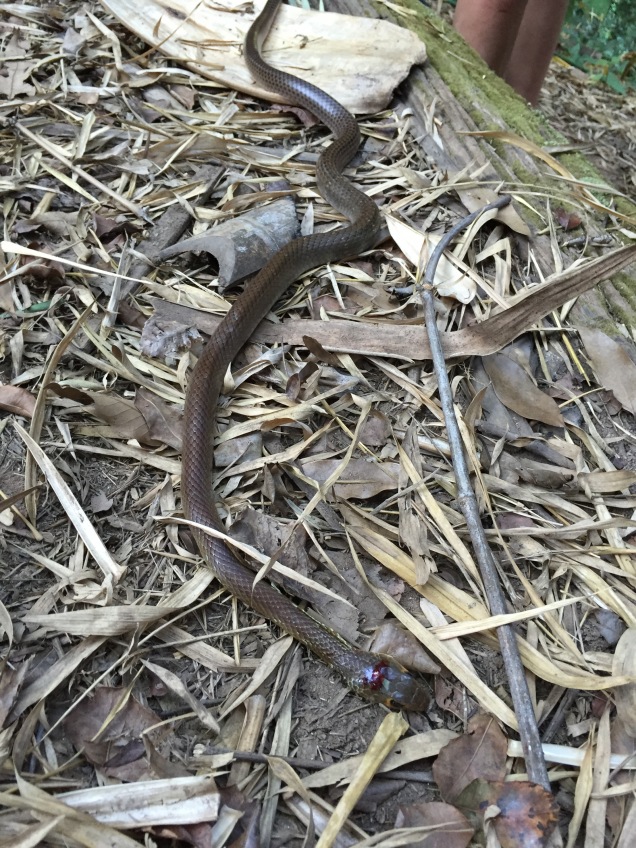 Our dinner was steamed rice and vegetables, prepared by the villagers, but the special appearance was reserved for the snake.  The chef sliced it up into thin pieces, stir-fried with lemongrass and scallion, and served it to the group in a large bowl.  Surprisingly, it looked pretty tasty so I was game for a taste.  The verdict?  It wasn’t bad (I even went back for seconds), but there were so many bones that it was entirely too much work to get to the meat. 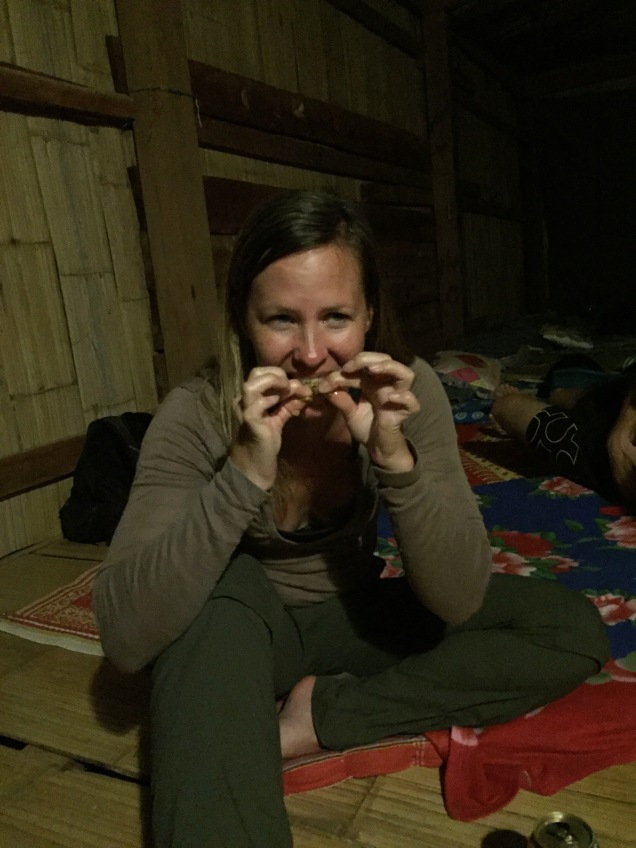 We would be spending the night at a village homestay.  There was a long room lined with 10 bamboo mattresses and wool blankets.  The resident dogs of the village were not pleased with our pack invading their territory.  Poor Casey was caught between the two groups and suffered a nasty bite.   The pup, only about 4 months old, was learning the rules of the game way too early. Now we know why the guide wanted the puppy to stay behind.  We were kept up most of the night between roosters who couldn’t tell time and dogs fighting underneath our elevated hut.   By the time morning finally came around, we were ready to trek again.

Exiting the village required some careful maneuvering through the dogs.  Andrew held Casey out of the line of fire but her breathing was raspy and it seems like the bite may have punctured a lung.  The second day’s trek seemed very forced.  I suppose the reason it was a “non touristy” trek is because there wasn’t much to see.  We were walking through farmland and rice fields, not a jungle trek as we had expected.  The best view we had that day was at the end while we were waiting for our return transport.  The Argentinean family had booked an elephant ride so we were separated for a few hours.  They asked us to take care of Casey.  We spent a large amount of that time waiting for our guide, who was watching a soccor game.  When it came time to leave, we had to leave Casey behind.  We weren’t returning to her home and we clearly couldn’t keep her forever.  She had curled up underneath a picnic table and was sleeping peacefully.  As we walked away, I turned to see a small boy, perhaps 5 years old, throwing rocks at her under the table.  A difficult image, man’s best friend is not always treated as such in this part of the world.  Just heartbreaking. 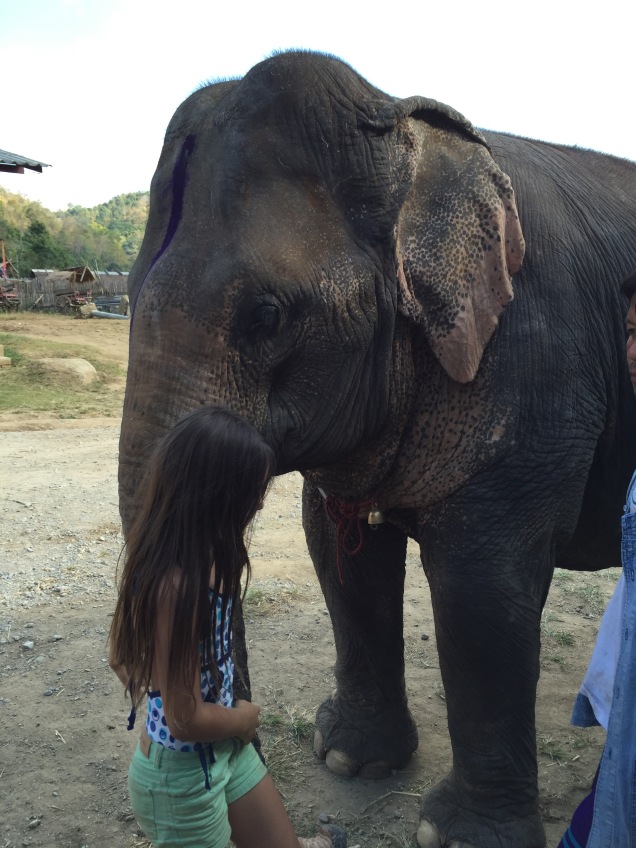 We returned back to Chiang Mai in the evening, just in time for the Sunday night market.  I joined this group of guys for a night of street food, classic American music, and tall Chang beers, but in reality, I was just biding my time.  Tomorrow would see the arrival of friends from home and I was too excited to sleep!

One thought on “Christmas in Chiang Mai”

The little things. Besides these beautiful dewy spiderwebs everywhere, a fantail followed me for nearly 3 hours. Now these little guys are known for following people in order to eat the bugs that we stir up when we walk, but three hours seemed excessive! If I got too far ahead, he would chirp at me as if to say “wait for me!” I was a little like Snow White except minus the prince and the 7 short guys and really nothing like Snow White at all actually. Anyway... •
Heaphy is open to mountain bikers in the winter months and they were everywhere. Pedestrians were in the minority. I’m not into it much myself so I was happy to still be on my feet tramping away like always. What’s more is that I got these off track viewpoints all to myself as MTBs just blasted right by. •
It was unheard of I’m told. Four days on the Heaphy Track in winter with not so much as a drop of rain and mild temperatures. Day one was a steady climb to Perry’s Saddle. The night was spent listening for kiwis calling in the dark. We heard them, yet a sighting still eludes me. 🧐 •
Tourism is pretty much drying up in New Zealand right now with the borders closed and winter upon us. Regularly scheduled transport has been suspended or cancelled and it’s given me some new challenges of getting around. I hitchhiked from Nelson to the start of Abel Tasman Track, walked the 60k up the coast from Marahau to Wanui, and then hitched to Takaka. My plan going forward is just keep right on walking over to the start of the Heaphy Track and down the west coast to Karamea until I can get a ride back to Nelson. I love the freedom of knowing that if my feet can walk there, nothing is off limits. Photo taken from Separation Point just before the rains came and obscured this view. •
The night before with tide going in. The next morning I timed the estuary crossing for low tide and this bay was nearly empty. I say nearly because there were about 3 places that I walked through water up to my knees and it was downright freezing, the kind of freezing that takes your breath away and feels like little needles on your skin. To counter the cold water on my feet, I was wearing a thermal jacket, hat and gloves up top and then did a fair amount of jumping around once I had crossed. Does the trick. •
Two of three days exceptional weather. The track was busy, but not too much, and with the sun so low all day, the sky always looked different from every angle. Coastal walking from a high vantage point and estuary crossings where you can literally dip your toes in frigid water. The sandflies were mostly in hibernation, yet so many fantails flitting about. And weka. Lots and lots of weka. •
Last weekend, I took a few days for a walk up the Abel Tasman Coastal Track and I couldn’t help thinking how nice this must be in the summer. I can imagine stopping off at one of these coarse sand beaches every couple of hours for a swim, but alas, it is winter and these beaches are not near as inviting as they first appear. Still lovely though! •
If I had spent lockdown here, I would have been in the best shape. The trail runs I tried were nearly the death of me, but I figure I just need practice. And it’s easy to forget that you’re dying when you have views like these. •
A birthday hike up Mt Stokes with @trailrun_physio for some fantastic views all the way to the north island. A flask of honey whiskey to warm our bellies and fresh air to warm our souls. ❤️ •
Back in Picton 4 months later. It’s a different season and all the tourists are gone, but more so than anywhere else I’ve been since lockdown ended, it feels good to be here, being this close to the trail and all the memories that come with it. ❤️ •
%d bloggers like this: