What am I even doing here? That was the question weighing on my mind as I rode the old colonial train from Colombo to Kandy in Sri Lanka. This was a destination I had wanted to visit for quite some time, but for the first time, I literally had no clue where to go or what to do. The freedom of not having a plan is liberating and refreshing, but only when time is not a constraint. For better or worse, I had already confirmed a departing flight for two weeks in the future, leaving me with the sense of urgency that I hadn’t felt in several months. 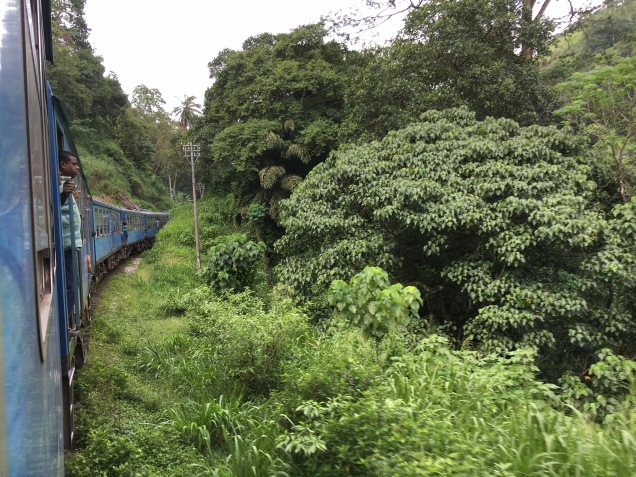 I had arrived in the capital city of Colombo late the night before and the only thing I knew to do was to leave. I had read rave reviews about the train into the hill country so without so much as a glance over my shoulder at the capital city, I found myself bound for Kandy. The loud hurried atmosphere of Kandy, the country’s cultural capital, was not unlike other places I had been in Asia, yet all of my senses were on overdrive. Every horn, every whistle, every offer for a tuktuk…they were deafening. I needed quiet. I needed to settle in. I needed to think. It was impossible. I stubbornly chose to walk the 1.5 miles to my hostel from the train, which was quite the chore carrying my 30kg of stuff, but I thought that would be easier in my state of mind than negotiating a fare with a tuktuk driver. 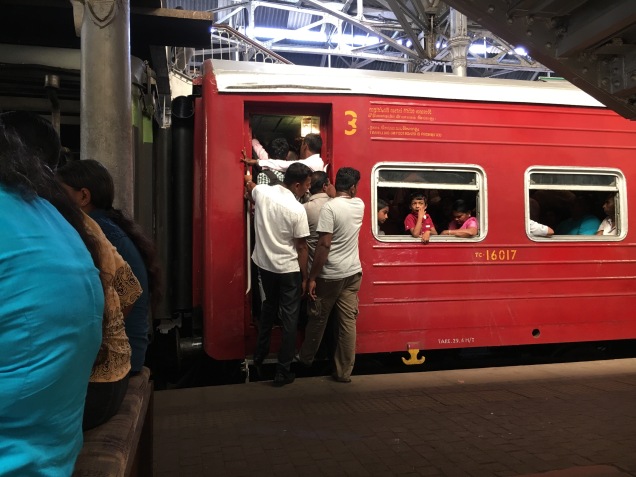 My hostel was indeed quiet and almost empty. The boy working at reception was overtly cheerful and eager to help me with onward planning, but the problem still remained that I had no idea what my options included. After being relieved of my pack, I ventured for a walk and immediately regretted it. I don’t blame Kandy for being aggressive and pushy. It is a city, after all. I just wasn’t in the state of mind to tolerate the blatant staring at the white girl traveling alone or the unsolicited friendships offering to give me a tour. This is not how I wanted to spend my holiday.

The next day, with the desire to make meaningful use of my time, I took a local bus to Sigiriya. Not aware of the schedule, I had missed the direct bus so I had to take a bus to Dambulla and then catch a connection to Sigiriya. This was fairly straightforward and easy (and cheap which was my main motivation for not just taking an organized tour), but the downside to this type of travel is that you have to pay attention and you have to be “on” all the time, ready to thwart any scams thrown at you and prepared not to miss your stop. It can be overwhelming. Already burnt out from months on the road, I was finding it nearly impossible to catch my breath or regain my equilibrium.

Sigiriya was indeed beautiful and aside from the few offers of a tour guide, it was largely free from other noise. The rock fortress is centered around Lion’s Rock, a 220 meter high boulder where King Kasyapa was said to have built his palace during the 5th century.  It consists of 1220 steps that bring you to the top of the rock. The weather was incredibly pleasant and the fresh air gave me a more positive perspective. For a moment, I felt silly that I was feeling depressed in such an amazing place. 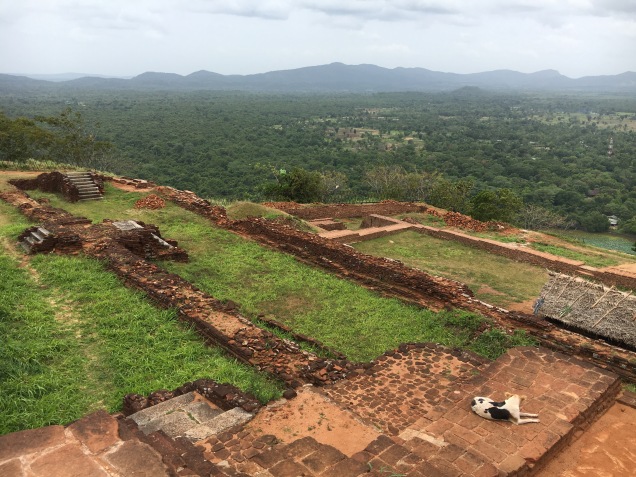 Then I made the return trip to Kandy, argued with the first bus driver when he tried to overcharge me by 6 times what I had paid on the way there, sat in a second crowded bus between one who had a grave cough and another who hadn’t seen a bath in ages, almost missed my stop when the bus took a different route on the return, and then didn’t have correct bills to pay for the final ride so as to delay the whole lot as the attendant tried to make change. Whatever euphoria I had attained at Sigiriya had been erased.

Kandy was one of those places that everyone says you must visit in a particular country (“Oh, you must go to Kandy!”) except when you get there, you realize there isn’t much to actually do in the town itself. Da Lat, Vietnam and Chiang Mai, Thailand are like this as well. Kandy didn’t suit me so I continued on to Ella, a little known destination deep in the hills, surrounded by thriving tea plantations.

The train from Kandy to Ella was allegedly sold out so I was directed to take a local train to Perideniya and then switch to the main train line. I was told there was only one seat in the first class coach of this train to Ella so that I should buy it immediately or risk losing it. The first class seat was only about $8USD, but I wouldn’t normally travel in first. I can usually sacrifice a little comfort to save some dollars, but it was the last seat…. Or so I was told. When the train departed Perideniya Junction, there were only 5 passengers in my car and the rest of the train was equally vacant, leaving me to surmise that it was a ploy to sell more first class seats. The rain fell in sheets out the window and the train loudly bumped and bounced for the entire 6 hour journey, but the scenery was infinitely breathtaking. The jarring clatter of the rails became soothing after some time and with all the empty seats, I was able to relocate my position depending on where the best vantage point happened to be.

Within minutes after arriving in Ella, I knew that I would love it there. It reminded me of Salento, Colombia in a lot of ways – a bit touristy, lots of hiking nearby, friendly locals, not too much traffic, and a robust economic source aside from tourism (tea in Ella; coffee in Salento). My guesthouse, Grand Peak Ella, was nothing special, but Sonny and his wife, the owners, might be the kindest people on the planet. For what Kandy lacked in charm, this little country town was the polar opposite.

I spent the following two days walking for miles and miles, first to Little Adam’s Peak, then to Nine Arches Bridge, and finally, to Ella Rock. For directions to get anywhere, it always began with “Just follow the train tracks…” so like the locals, I found myself walking on the tracks. Untouched by typical human habitation, the route along the tracks was always highly rewarding. 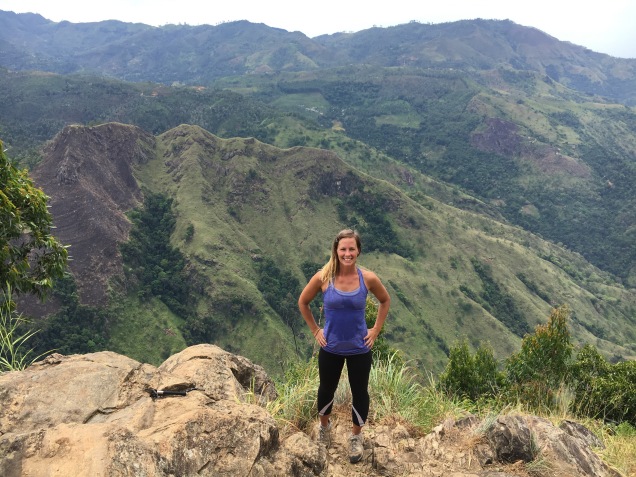 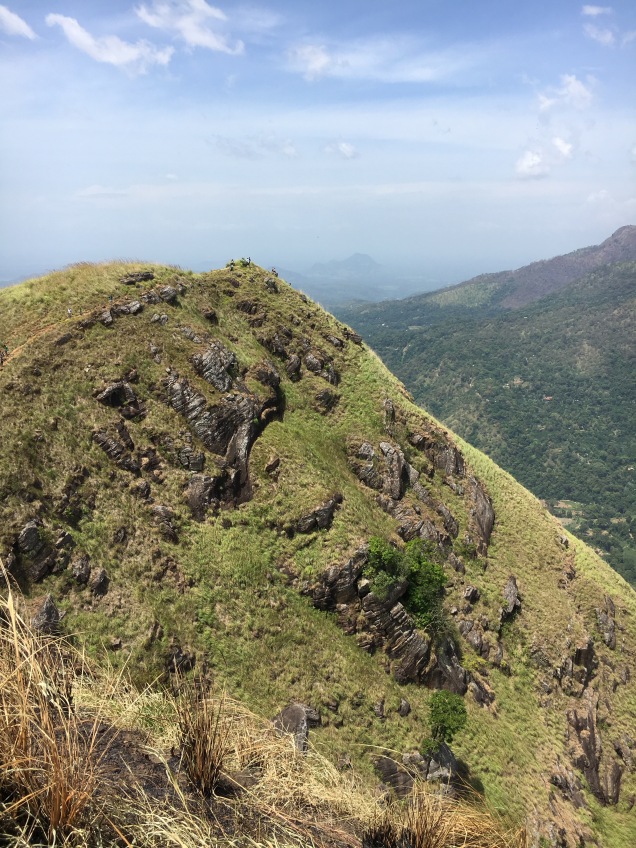 At Nine Arches Bridge, aptly named for the number of its arches, I wanted to see the 1:30pm train pass over the bridge, which didn’t actually come until 3:30pm. I sat perched at a nice viewpoint that happened to be in front of a local home. The owner, who undoubtedly sees new spectators 6 times every day for each of the trains that are scheduled to pass, graciously brought me a cup of tea and a banana while I waited. 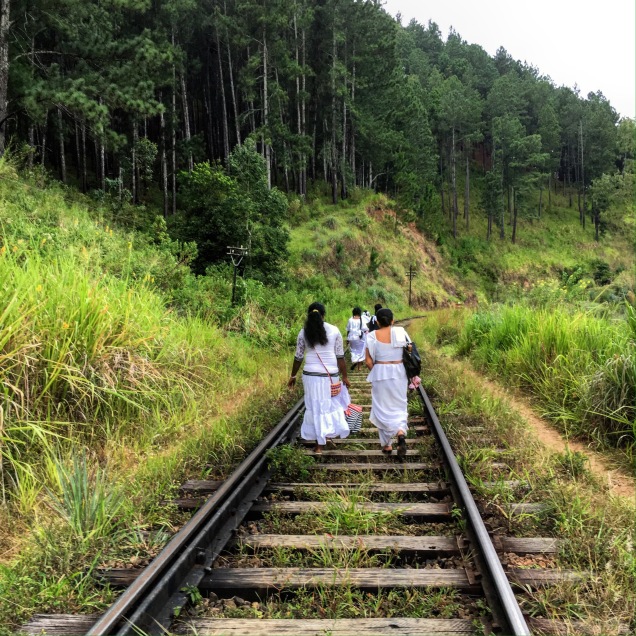 The warm hospitality I experienced in Ella was, above all, what set the tone for the rest of my travels in Sri Lanka. Even though Kandy began a little rocky, the locals I met in Ella and throughout the rest of the country were some of the most welcoming genuinely kind people I had met anywhere else.