Which comes first – the chicken or the egg? In this case, I’m not exactly sure. Olomouc (pronounced O-lo-moots) is Czech Republic’s second largest city, but few people have ever even heard of it. Like Prague, it boasts an impressive town square and local brews on tap, but I found it almost devoid of tourists. This was a recurring theme from my travels in eastern Slovakia and Hungary as well, anywhere outside of the big city centers actually.

Olomouc claims that the reason no one visits is because in the age of Internet travel planning, fewer people are using guidebooks to organize their itineraries in favor of Google searches instead. Because Olomouc is hard to pronounce and hard to spell, a browser search turns up nil and therefore, people don’t go. My theory is somewhat different. I think people don’t go because it’s just a little too inconvenient, a little too far, and a little too empty. I really liked Olomouc and my hostel, Cosy Corner, was indeed very cozy and comfortable. But tourists and especially travelers like to go where the action is. There was very little action in the city. Even on a Friday night, walking through the town square at 8:00pm, it was incredibly quiet in an eerie kind of way. Obviously if more people visited, this would change, but it may prove to be an uphill battle to get their share of the tourist pie.

For starters, Olomouc is approximately four hours distant from Kraków, three hours each from Bratislava and Vienna, and two hours plus from Prague. I arrived from Kraków and departed to Bratislava so I can say that it’s not exactly a convenient location through no fault of their own. From Kraków, I had to take a bus and transfer to a train at the border. To Bratislava, I had to take two trains, neither of which was on time. Vienna also requires a connection by train and Prague is the furthest away by distance but is the only one with a direct route. I am really glad I went and I really enjoyed my time there, but I don’t see any time soon when the tourists will be flocking. Of course, pioneer travelers will happily note they can keep on “discovering” Olomouc for themselves as if they were the first.

The town square is home to one of the few astronomical clocks in the Europe. At noon every day, a small crowd gathers and watches the rather anticlimactic performance of dancing figurines and accompanying bells and whistles. Prague has a similar clock and, of course, a larger crowd, but the faces of disappointment are all the same. I stood around all morning waiting for THIS? There is also a UNESCO-listed monument, Holy Trinity Column, dating to the 16th century and serving as a monument of gratitude at the end of the plague. While neither of these is a huge draw for crowds, the town square itself has such potential if only people would go there! The Saint Wenceslas Cathedral is worth a mention as well, although it’s not in the town square and I’ve seen about 800 cathedrals too many to still be objective.

A strange incident occurred outside the cathedral, however. A little girl no older than 4 or 5 was sleeping on a park bench across the street without an adult in sight. I had not noticed her until a police cruiser pulled up and attempted to wake her. She wouldn’t wake, almost as if she was drugged. They tried speaking to her in several different languages (really just saying hello in several languages – I’m not sure they could have carried much further than that). The police were becoming quite agitated, understandably so. This carried on for several minutes until the girl’s mother casually came out of the church and interrupted. Now they were speaking Czech so I couldn’t understand, but it appeared that the mother was angry they were waking her daughter. She yelled and scolded them and they appeared to apologize and drove away. It is fascinating to watch what might be considered a crime in one country be treated so differently somewhere else.

Being my first stop in the Czech Republic, experiencing the beer culture was high on my to-do list. I found this great microbrewery in the center of town that was actually busy on a Friday night. Svatovaclavsky Pivovar advertises their beer spa where you can take a beer bath for a nominal price. I admit I really wanted to give this a try….you know, for research. Unfortunately, the spa was closed by the time I checked into the bar so I did the next best thing – beer tasting! Their dark stout was rich with chocolate undertones. I had to refrain from ordering a second so that I could try a different variety. I asked if they had an amber brew. The bartender didn’t understand the word so I rephrased to ask if they had something between a light and a dark beer. While what she poured seemed like a strange layer cake of chocolate and vanilla, it is actually on their menu as Mr. Jobst Mixed Beer and was a fantastic combination.

After exhausting options in Olomouc, it had been recommended to take a day trip to Kromeriz to see the UNESCO-listed Kvetna zahrada gardens. They were nice, yes, if not a bit….meh. The interesting part is that parts of these gardens had been recovered in an archeological dig and reconstructed as they had been in the past. UNESCO designated because they are exceptionally well maintained and preserved. I also saw the Archbishop’s Palace, enduring a rather boring tour conducted in Czech, and the sad little zoo on the grounds. I was glad I went, but I would find it hard to recommend either of these places to someone who doesn’t have a lot of time. 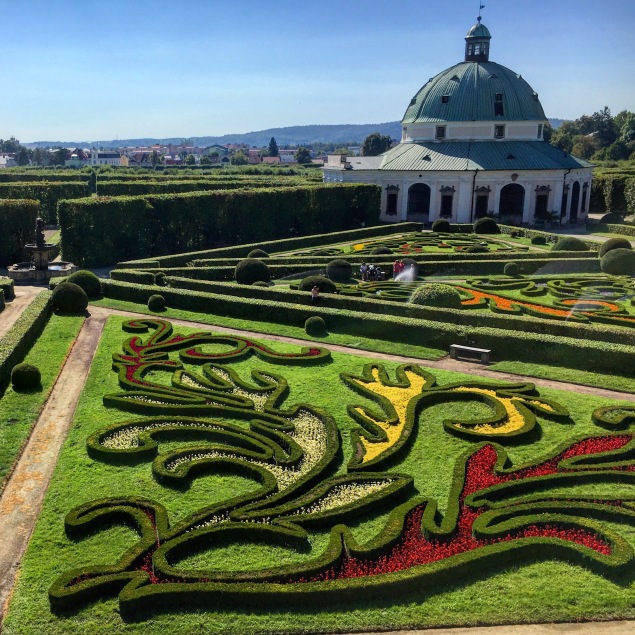