What happens when a Hollywood movie producer creates a horror film about a group of backpackers staying in a hostel who are systematically murdered to sell their internal organs on the black market and then chopped up into pieces to conceal the evidence? That movie was set in Bratislava (although actually filmed in Cesky Krumlov, Czech Republic over 5 hours away). And since the first movie was released in 2005 (subsequently there are now two sequels), the tourism in Bratislava has declined by more than 50%.

I’m anxiously checking my watch and willing the train to get moving. Trains don’t run late, do they? So far, I had been taking this for granted. Every train I had taken had at least left on time even if it had arrived late. What was the problem?? Finally, we slowly pulled away from the station in Olomouc approximately 27 minutes behind schedule. I had a 25 minute connection in Breclav on my way to Bratislava and I had timed my arrival in Slovakia perfectly so that Martyn and I would both arrive at the same time. If I missed the connection, there was another train two hours later so not the end of the world, but that would mean two hours less in an already short weekend with Martyn. Luckily, the connecting train was also delayed for some unknown reason (a common theme I would soon discover all over the Czech Republic). I only arrived 30 minutes later than planned.

Just being a short hop from the UK, most destinations in Europe would be easy for Martyn to jet over for a few days. I gave him a theoretical itinerary so he could pick when and where he wanted to go. He didn’t hesitate in choosing Bratislava. I hadn’t heard much about it and while I was aware of the movie, Hostel, I didn’t know that it was set in Bratislava. I’m still not sure why Martyn chose it over other places and now after spending five whole days there, I can say that the movie Hostel may be the most interesting thing about it. Oh, sure, there is the Danube. The first major protest against the Soviets was held here too. There is a castle, of course, and a cathedral and an old town. Yawn…..

A big ugly bridge cuts right through the middle of the old town, which we learned was built by the Soviets after destroying a large chunk of the historic buildings. The bridge is a highway with a consistent high volume of traffic and runs right alongside the cathedral. Apparently the movement of the traffic is gradually wearing down the foundation of the cathedral so that they are struggling to keep up with repairs. The river walk next to the Danube is not nice and would be a wonderful place for a stroll or riverside restaurants if they decided to improve it. The Soviet style buildings highlight the landscape on the other side of the river. 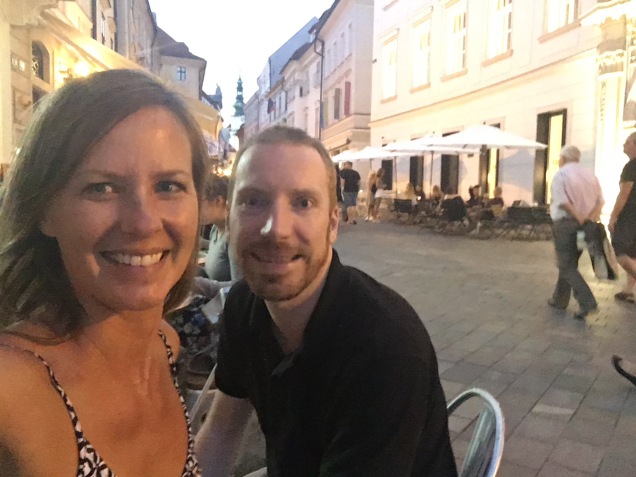 I feel bad for not being more kind to Bratislava.  It was a lovely capital city with a great cafe culture. Quiet city streets with abandoned buildings were common, which were nice for exploring away from the crowds. Martyn and I had a great time because we were together, but otherwise it was a bore. We literally moved from one sidewalk scene to another, while consuming loads and loads….and loads….of Zlaty Bazant, the local beer. The food was pretty good, although admittedly neither of us tried any Slovak specialties. Thank goodness my beau has improved his sitting skills! 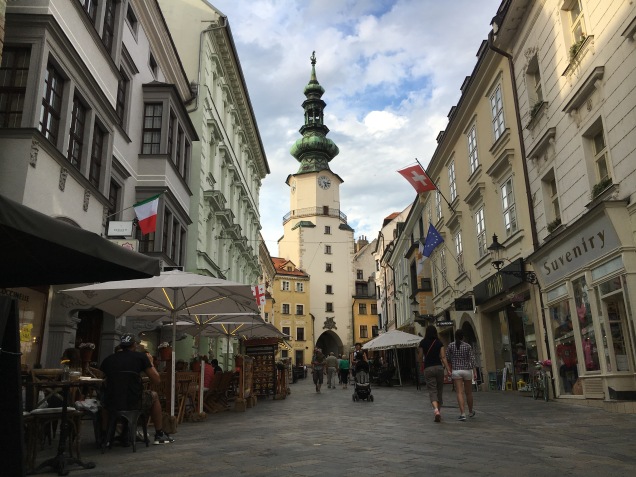 A weekend in Bratislava, yes, by all means. Don’t let the movie keep you away!!  Martyn stayed for three nights and I had already committed to two more beyond that. If I get momentum and start darting across the map, it doesn’t take long until I am burnt out and depressed so staying for at least five nights somewhere (even if it’s boring!) helps to keep me sane. I spent those two days plugged into my favorite of the smorgasbord of cafes writing this blog and other general life admin. Necessary, but not exciting to read or write about so before the title becomes a self-fulfilling prophesy, I’ll wrap it up!