Covered in urine and dirt, with two baby baboons clinging to my t-shirt, a third juvenile sitting on my shoulder and grooming my hair, and a fourth trying to scale my leg to get a closer look at the babies, I slowly dragged myself back to the farm. The rest of my group had arrived ahead of me, equally saturated with foreign substances, but I had been carrying the babies so I was a prime target for attention from the older ones. I didn’t exactly choose to carry the babies. They choose you. And when they do, they hold on for dear life. Extricating them invites ear-splitting screeches and an almost immediate return to their former position. 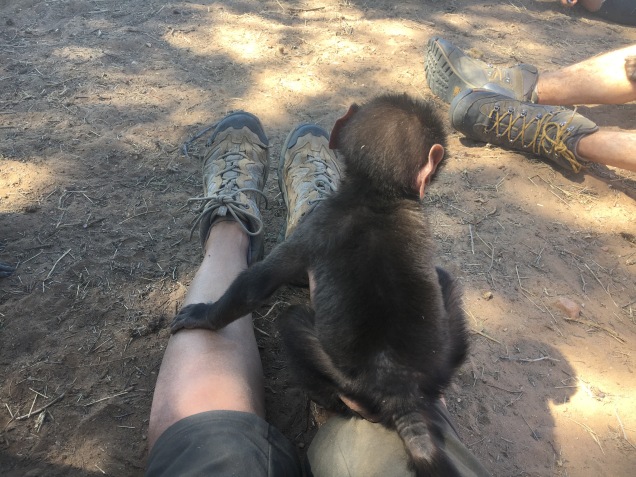 I went on my first baboon walk about four days after I arrived at N/a’an ku se. Seven volunteers with two “alpha” handlers head out into the bush with three baby baboons and approximately twenty juveniles. Once baboons have become habituated to humans they can never be released. Adult baboons can be quite nasty, attacking humans and domestic pets with their vicious canine teeth. They steal from the rubbish bins in the cities or the farmer’s fields in the country, generally behaving as pests. This means that every baboon that has ever been rescued at the sanctuary still lives there and needs to be walked and fed daily. When I say “walked” I don’t mean that you neatly attach a collar and leash. I mean “walked” in a very loose sense when the enclosure door is opened and a mass of coarse gray hair, long black fingers and toes, and mischievous eyes clamber all over you like a jungle gym. All the while you are expected to keep walking and not react too strongly when they yank on your hair and rub their butt cheeks on your shoulder. 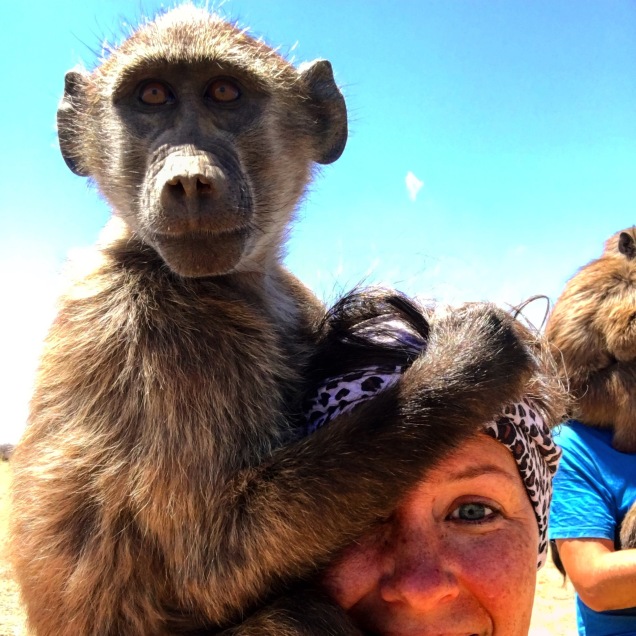 Baboon society operates on a strict heirarchy, the alpha only earning its position by fighting his way to the top. The handlers have earned the alpha position by carrying a large stick and disciplining the little brats with a swift spank. The volunteers, on the other hand, are the lowest of the low and pretty much have to take whatever the baboon may throw at us. We walked the troop of baboons to a tree a little distance off the property and for what seemed like an eternity, we sat in a circle, allowing them to climb the tree, dig for roots, and generally harass us as play things. The babies, Dawie and Christa and Vloi, generally hopped between a few select surrogate human parents, but whoever had them drew their share of attention from the other baboons. The troop we walked that day were still babies themselves, only a few months older than Dawie and Christa and Vloi, but old enough not to need constant maternal connection. Their interest in the babies could be likened to a five year old that wants to play mommy to her baby sibling, but doesn’t quite have the skill set. The older ones would pull and tug on the babies, awkwardly hugging them or dangling them upside down, trying to get the babies to hold on to them instead. Alternatively, the older ones would also cuddle up in our arms as if they were trying to be the babies (and get the requisite attention that entails). One of the older ones even fell asleep in my arms sucking her thumb and on a different occasion, crawled under my shirt to take a nap.

After two weeks on the farm, I signed up to babysit Dawie for the night. Of the three, he seemed to take to me the best, although I was hesitant at first because….well, because he just pees SO much. He pees when he’s scared. He pees when he’s excited. He pees when he’s happy. You get the idea. In the end, I couldn’t resist his adorable desperate neediness so I committed to an overnight. The baby baboons can be quite fickle with their affinity for a particular person so I was nervous he would screech when I picked him up for the night. I went armed with a bottle of warm formula to distract him, which worked except that he guzzled the bottle in 10.2 seconds and we hadn’t made it back to the room yet. Of course, now that I was out of milk he immediately saw someone whom he liked better than me, jumped out of my arms and was gone in the blink of an eye. Sigh….

Not willing to be rejected so easily, I wrangled him back up. Do you have any idea how embarrassing it is to pry a little baboon suction cup off of their favorite person in the world while they scream bloody murder all up and down the length of Africa?? Of course, the minute we got to my room, he began happily bouncing around the furniture as if this was his new favorite place in the world. Dramatic little thing he is.

After playing in the mud and dirt all day, I wasn’t about to bring a mucky monkey into my bed so the first thing we did was take a shower. I had already showered myself, but a baby baboon gets comfort from being attached to someone so it’s much easier to shower with them than trying to pry their fingers loose to dunk them in a bath. The minute that warm water ran over Dawie’s head, he instantly fell asleep. Shampoo, conditioner, a little manicuring under the nails…all worries either of us may have had vanished down the drain.

Back in the room, Dawie continued to sleep as I examined the newborn-size nappy. I’ll admit I don’t think I’ve changed a diaper on a human before, let alone a pint size monkey. The demo that I had watched twice now made it look so easy. You cut a tail hole two finger widths above the crease on the back. The sticky tabs fasten in the back, opposite of a human baby, because the baboon is much more adept at opening those sticky tabs and giving you a surprise in the morning. You make sure the boy business is pointing down just like a human. Easy. In the demo, the baby baboon is upright and attached to their human while you slide your nappy underneath. Dawie was sleeping so he wasn’t upright at all, which made fastening the sticky tabs in the back all the more complicated. Plus, there was the issue of the tail. I manipulated that tiny monkey body in so many directions, I would have thought he was in a coma if he hadn’t woken up. By the time I finally thought I was done and Dawie was mocking me with his big brown eyes, I realized the diaper was way too loose so slapped some duct tape on the side for good measure. I was not going to have a wet bed tonight!

By 9:15, Dawie was out for the night, pleased to be slurping away on his pacifier. Even as I struggled to get us both up to my top bunk, he didn’t fully wake, yet snuggled his way under the covers for an eight hour slumber. Eight hours he slept! I slept lightly, constantly checking he was still there since a top bunk is no match for a monkey. About 5:30, I heard the pacifier drop down the dark side of the bed where only the spiders and dust bunnies live and consequently, Dawie started to stir. I decided now was as good of time as any to make his morning bottle. Now the big difference between human babies and baboon babies is that baboons are much more nimble and strong so that as soon as I pulled out the bottle, Dawie began screeching, scaled my leg, ripped the bottle out of my hand, and dumped the dry formula powder all over himself. Hmmmm…let’s try this again. I remade the bottle with one hand, trying to juggle a squawking monkey with the other (keeping in mind that if he can wriggle out of my grasp, he can clamber over my shoulders and walk along my outstretched arm in less than one second). 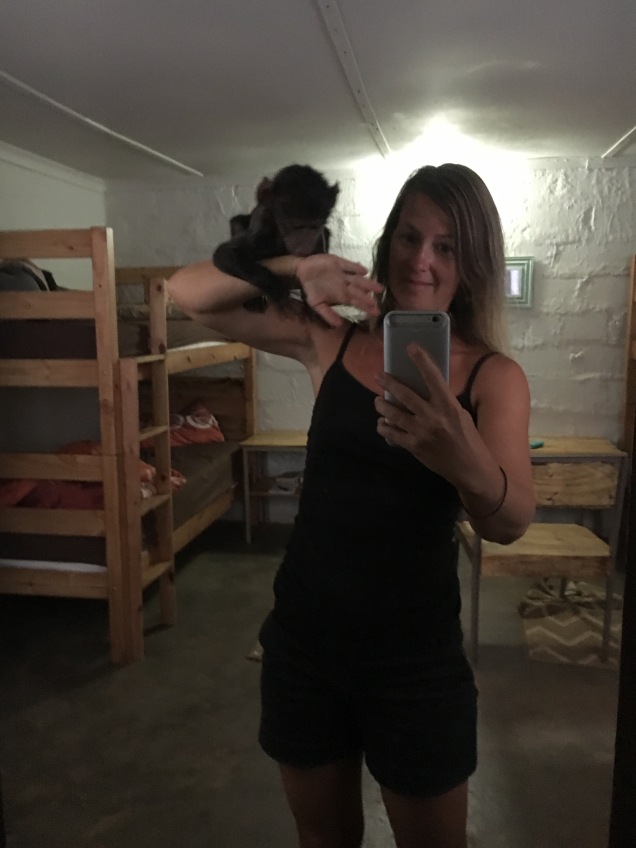 Once he was full from his morning bottle, it was time to check the damage in the diaper. Surprisingly, it was relatively clean. No solids. Only a couple of wet marks. I was just glad none of it ended up in my bed. As I tried to get myself ready for the morning, Dawie played on the floor, but if I walked more than a couple of feet away, he would squeal and cling to my lower leg. I tried to get him to cling to my waist like I had seen him do with other volunteers, but he just wouldn’t hold on tight enough. I needed both hands so I couldn’t hold him up. He was playing a bit of a game by sliding down, screeching, I pull him up only to slide down again. I don’t know what made me do it (perhaps I miss my dog?), but Dawie was driving me nuts so the next time he slid to the ground I playfully lunged at him the way you would with a dog when it’s getting excited. Again Dawie let out a high-pitch squeal, but this time he released every content of his bladder all over the floor. Not claiming to be parent material, I literally scared the piss out of him. It was a fun experience, Dawie and I, but I think I’ll stick with the cheetahs.

One thought on “A New Level of Dirty”