An important element of N/a’an ku se’s mission is research into the behavior of certain species, which can help to better understand the potential for release back into the wild, if not making a plan for definite release. My first day on a research team we studied our pack of thirteen African Wild Dogs. These dogs, then a litter of fourteen, had been recovered in a den on a farmer’s property about three years ago. The mother was killed, but luckily the farmer didn’t have it in his heart to kill the fourteen pups so he called N/a’an ku se. One later died of canine distemper. The African Wild Dog is the second most endangered carnivore in Africa next to the Ethiopian Wolf, which you’ve probably never heard of. Farmers despise them and often call them savages. Wild dogs hunt in packs and use a tag team hunting method to exhaust their prey before tearing it limb from limb while it’s still alive. If a farmer catches wild dogs on his property, he will most certainly kill them to protect his livestock, his livelihood. Although far from the relationship of domestic dogs, wild dogs are susceptible to many of the same diseases and can contract parvovirus or canine distemper to be rapidly spread amongst one pack, effectively wiping them out in one wave of disease. 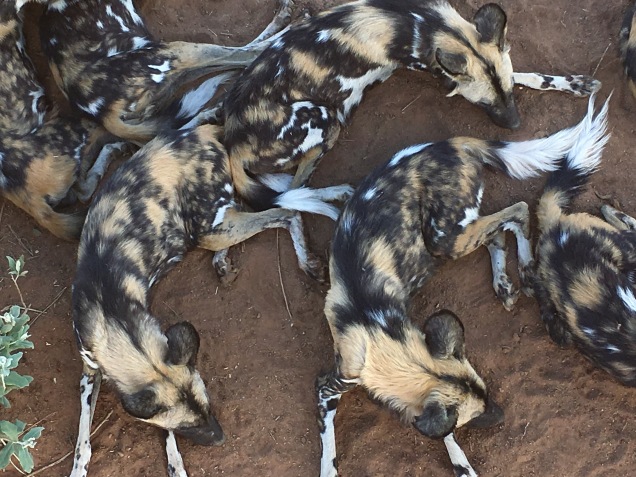 First, we had to learn to identify each of the dogs by their unique spot patterns. Christian, the alpha male dog, has a dice of five spot pattern on his left side and Queeny, the alpha female, has a large tan-colored heart shape on her right side with four large tan dots on her left side. The challenge was to observe them from an unshaded exposed platform while the dogs all laid and did nothing in the shade of the same platform. I personally found it fascinating to actually know their names and watch their behavior. Why is Smiley laying by himself while all the other dogs are huddled together? Isn’t it interesting that Olaf is the first to raise his head when he hears something? The goal is to eventually release these dogs, although it is a particularly tricky endeavor. We can’t risk releasing them in an area where they might turn toward another farm so meanwhile, we need to collect information about their complex family unit and formulate a plan to release them in stages, hopefully integrating a few dogs into preexisting wild packs. The other members of my research team quickly lost interest under the African sun so we returned back to the farm to prepare the dogs’ evening meal.

The pack of dogs is only fed twice per week because oftentimes in the wild they wouldn’t eat more often than that anyway. As a disclaimer, I will state that it is strictly against any rules to feed livestock to animals that are planned to be released. Typically, a supply of horse or donkey meat feeds all the large carnivores at N/a’an ku se, but desperate times call for desperate measures. Experiencing a severe meat shortage when there just isn’t anything available, a difficult decision to feed the dogs a whole calf carcass was made. A bright yellow bulldozer met us at the enclosure and, to a chorus of whining and begging dog noises, dumped the carcass over the fence so we could watch one of Africa’s greatest feeding frenzies.

For further research, a daily ethogram is scheduled for several of the farm animals who will remain in captivity. This means that one or two people will watch the animal’s behavior and write down everything they do for an excruciatingly long amount of time mainly to determine if the animal is happy or if anything can be done to improve their quality of life. I was one of the lucky ones. I had heard of people getting stuck watching the meerkats for hours on end. Meerkats don’t do much besides stand up, lay down, and stare at you while you’re staring at them. I was assigned to watch the six vervet monkeys on a Saturday meaning that my session was only two hours rather than the longer weekday sessions. Now vervets are generally much more interesting and active than other species, but I quickly learned why this is high on the least desired activity list. An excerpt from my vervet notes looked something like this:

2 are chasing each other around the enclosure

1 is staring at me

2 are vomiting after eating bugs

2 others are eating the vomit

1 is staring at me

The following week I was assigned to ethogram the two baby mongooses, which was painfully boring. There had been four babies upon arrival when they were tested in an enclosure with an adult male. They seemed to be fine together for awhile until the adult turned and killed two of the babies and injured a third overnight. When the remaining two babies were separated from the male, the injured one had suffered brain damage so now his baby sister is often seen taking care of him and helping him with basic mongoose stuff, like cracking his egg for him that comes with his dinner. Otherwise, he just walks in circles and seems confused most of the session. It’s quite touching and sad to watch for any length of time.

A typical research day involved setting camera traps to check on the health of an elusive nocturnal leopard or moving a capture cage to relocate a troublesome baboon. Or once, we fed, watered, and showered the horses to ride out into the bush for a wild game count on the property, sighting giraffe and zebra. On the horses, the game allowed us to get a much closer view than if we had been on foot. We even had a nature appreciation walk where we trekked out into the bush to examine droppings and tracks of various animals. Bet you didn’t know that giraffes droppings look so similar to eland droppings that often the only way to tell the difference is in the pattern in which they fall to the ground. A giraffe’s droppings have much further to fall so they often bounce and scatter over a wider area than an eland. I’m full of fun poo facts these days.
﻿

﻿
On the day we were assigned to measure cheetah footprints, we got to spend the morning with Odyssey, Wonder, and Shiloh, simultaneously coaxing Wonder to walk through wet sand while holding the other cheetahs at bay so as not to ruin the carefully orchestrated prints. The cheetahs were so well-behaved during our footprint session that Jo, our research coordinator, decided today was the day she was going to try out a new initiative.

What happened that day was wild and unpredictable. It could never be recreated and sometimes I find it hard to believe that I was even there. Jo, together with another researcher, Hanlo, had been given permission to take Odyssey to a different part of the property to help search for marking trees. A marking tree is used by lions, leopards, cheetahs, or possibly other animals to communicate with each other. Sometimes it is to communicate ownership of territory or sometimes to locate a possible mate. Trained human researchers can recognize these trees on their own, but it’s much easier and faster to use the senses of a cheetah. We picked up Odyssey in the back of a buggy and drove about 30 minutes away to open bush. The skies had darkened and were threatening rain. Lightening pulsed in the distance. Odyssey was eager to disembark and even though he was attached to a lead, he walked with purpose back in the general direction from which we had arrived. 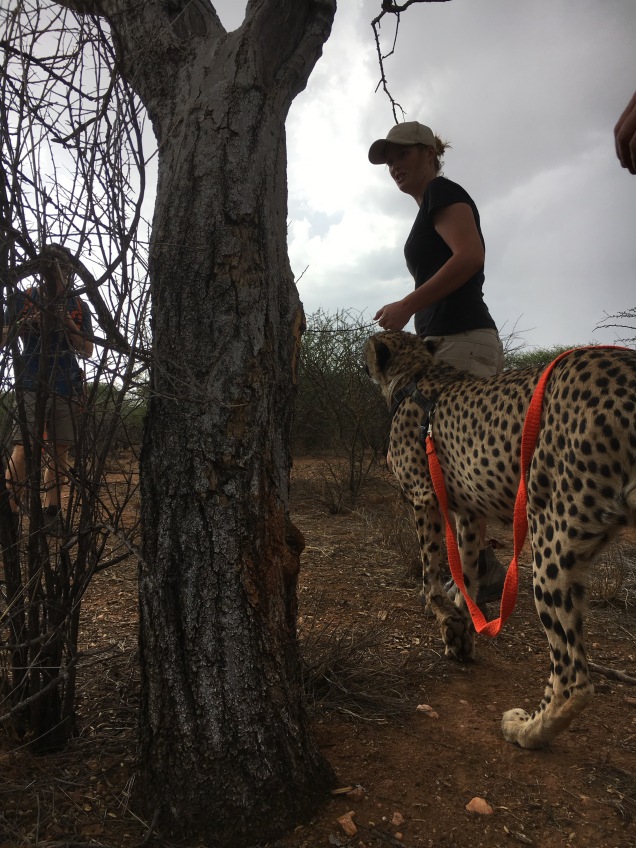 Walking with a full-grown adult male cheetah, somehow it’s easy to believe that he’s a Labrador but with the stealthy silence and indifference of a house cat. Odyssey weaved back and forth, followed by Jo and six volunteers (Hanlo had turned back to bring the truck around to a better position), when the first drops of rain started to fall. Cheetahs don’t like rain any more than any other feline so, still attached to his lead, he crawled under the thorniest bush he could find to shelter from the storm. Luckily, we were carrying a bucket of raw meat for just such occasions and we lured him out momentarily.

I wasn’t holding the lead, but I never took my eyes off Odyssey and I was relishing the opportunity to take photographs of our progress. In one second, he dropped his head and hunched his shoulders in an unmistakeable stalk, but the next second he was running. A wild cheetah might see something that interests them, but they have the perfectly honed skill of the “wait, stalk, run, trip, throat” approach, where they wait for their prey to get close, silently stalk to get closer still, run only when it’s a short distance to close, trip their prey by batting the back legs with their front paws, and then grip the throat to suffocate the animal before it can get away. While the general practice of this is pure instinct, having never lived in the wilds of Africa, Odyssey has never learned how to do this effectively so when I saw him hunch his shoulders, he skipped the wait and stalk stages, just running to see what would come of it. Chris, who was holding the lead at the time, tried to keep on but had to let go unless he wanted to be dragged along in Odyssey’s wake. 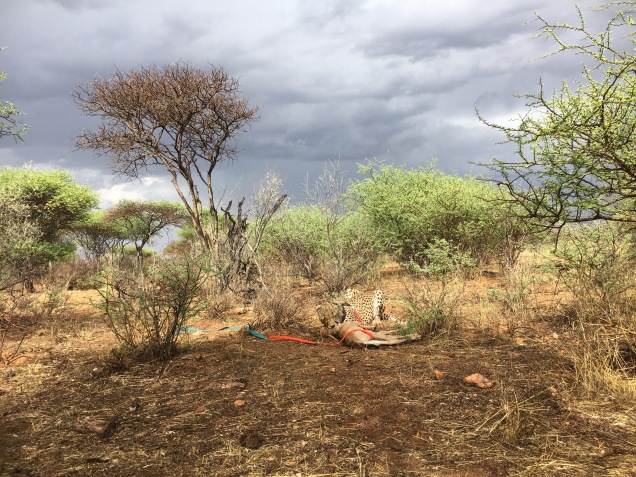 For those of us humans with mere human powers, we trailed Odyssey by several minutes, but as I ran through the pelting rain, I was hyper-aware that we were in fact running with a cheetah. What?! Who does that?!!! It was one of those incomparable magical moments in your life when you think perhaps all your dreams just came true. Finding Odyssey with a struggling baby hartebeest in his mouth wasn’t obscene. It wasn’t gory. It was nature. This is what cheetahs do. We hung back, hoping Odyssey would finish the hartebeest quickly, but this is the hardest part of a live kill. Odyssey knew to go for the throat, but his skills were clumsy and amateurish. He couldn’t finish the job and ultimately, when he became distracted by his audience, the baby got away. Unable to hide his disappointment (looking even more like a Labrador), Odyssey darted around anxiously for several minutes and even refused raw meat that we offered to draw him back toward the truck. I felt sad for him. Even with his plush, no-hassle life at N/a’an ku se, he is a wild animal inside of a tame body. He will never know the joy of the hunt or the taste of a fresh kill. I am sorry for the hand that he has been dealt and will forever use my voice to advocate against mistreatment of animals so that they must spend their lives in captivity, but in the name of research, I got to briefly (attempt to) run with a cheetah.