The Garden Route, a popular holiday destination for all of the South Africa’s elite and plenty of others from around the world, was where I would be spending Christmas and New Year’s Eve this year. The holidays were fast approaching and I had been strongly encouraged to book ahead several weeks earlier. I had been given some suggestions for where to spend the season from a friend, but it was hard to guess how fast I would be willing to move from one spot to another. To complicate matters, the Baz Bus only traveled five days a week on that route so I would need to make sure I didn’t get “stuck” somewhere if their schedule didn’t match mine.

Last year, I spent Christmas in Chiang Mai and New Year’s Eve in Koh Samui. All of the ‘good’ places to stay had been booked, not to mention that my flight from Chiang Mai to Koh Samui in the mid-week certainly cost a pretty penny. By planning about a month in advance this year, I booked the highly desirable Garden Route locales of Wilderness and Plettenberg Bay, respectively. But another untimely hiccup threatened to derail not just the holidays, but also my entire journey.

I ran out of money. Besides, patience, open-mindedness, and wanderlust, money is kind of a key ingredient in long term travel and I was flat out. Both my credit card and debit card were due to expire in January. I was on it! I knew this was going to happen so a few weeks earlier I had called both banks and asked that they send my replacement cards to my hostel in Cape Town. Upon my arrival in Cape Town, neither of my cards had been delivered yet. It was surprising, but I would be there for a full week so there was plenty of time for the mail still to arrive. Toward the end of my stay in Cape Town, I finally talked to the hostel owner and explained what I was waiting for. He shook his head and nearly rolled his eyes that I would have been so foolish to send mail to South Africa. He said they typically send Christmas cards starting in July because the service is slow and corrupt. I extended my stay by a few extra days, but ultimately I had to cancel both cards and request that they were resent to a PO Box, which I now know is the most reliable way of receiving mail there. The principal problem with doing this was that now I was operating on dwindling resources. Before closing the debit card, I withdrew an arbitrary amount that seemed like enough to get by for a week or so, but not too much to carry around on me in a country known for armed robberies.

The Baz Bus dropped me off at my accommodation in Wilderness in the early evening. I was low on cash after already spending five days between Hermanus and Oudtshoorn, but I had prepaid for this dump before I left Cape Town so that was sorted for the next three days. More of a campsite than much of anything else, I had paid for a dorm room and was escorted down a poorly lit sidewalk to the bunk quarters. Several silhouettes were smoking cigarettes and pot and a pile of empty beer bottles clanked when someone tossed on a new addition. My room was built for two single beds, yet six people were crammed into three bunk beds. It reeked of mildew and dirty laundry thanks to the three 19 year old English boys who were getting back to their roots without mom around. None of this was unique to this particular place above anywhere else I stayed, but I was soon to be introduced to the little known hippie backpacker culture of the country and it was probably my first revelation that even though I sometimes fancy myself a hippie, I am a complete amateur. 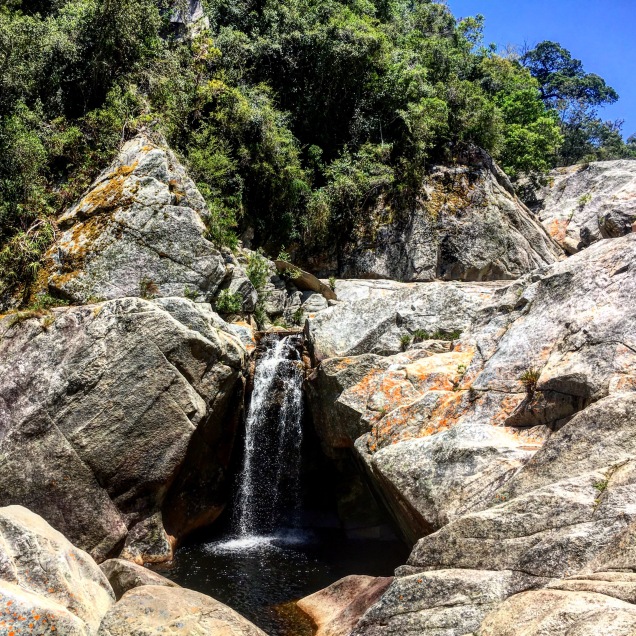 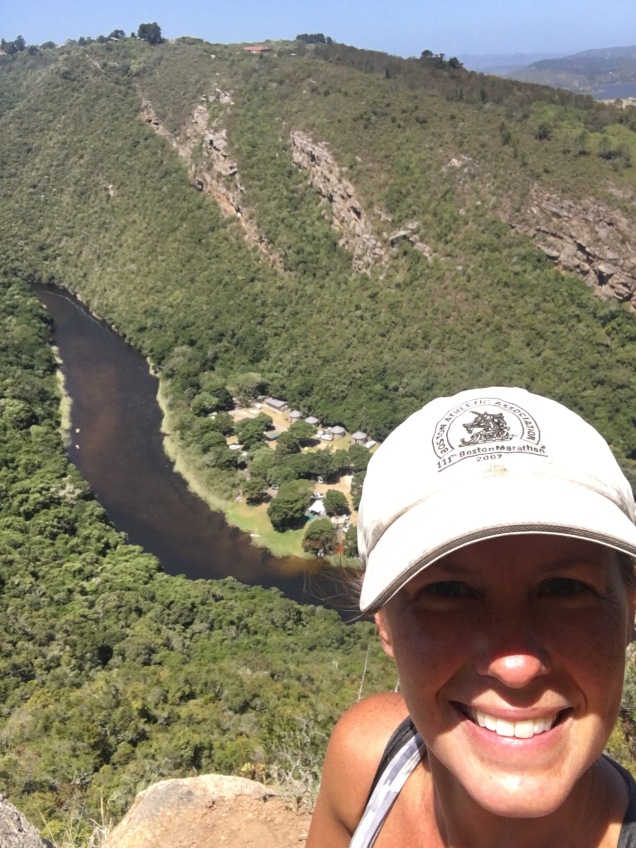 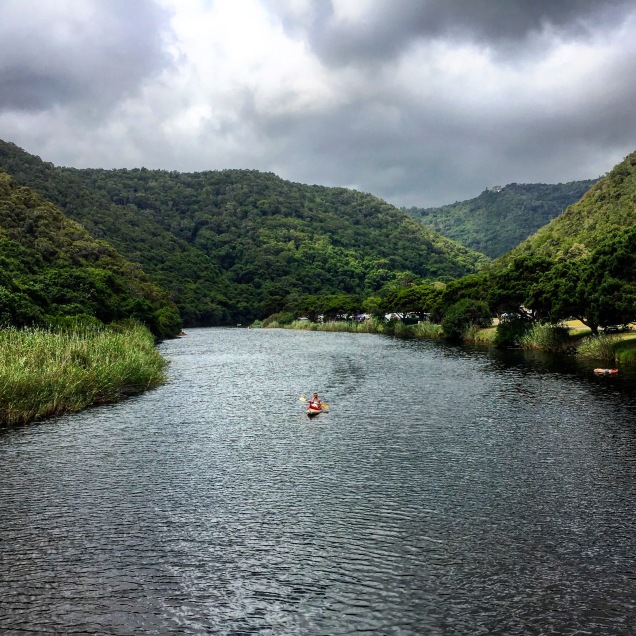 Considering I was temporarily destitute, I spent Christmas Day on a free waterfall hike, paying only for entrance to the park and finding it was also free to dip my toes in the ice cold water and to admire the view. The campsite was offering an economical Christmas dinner so I signed up for a meal in the mid-afternoon and spent the remaining part of the day watching a movie on my tablet and drinking a bootleg bottle of wine in my bed that was slightly damp from humidity. 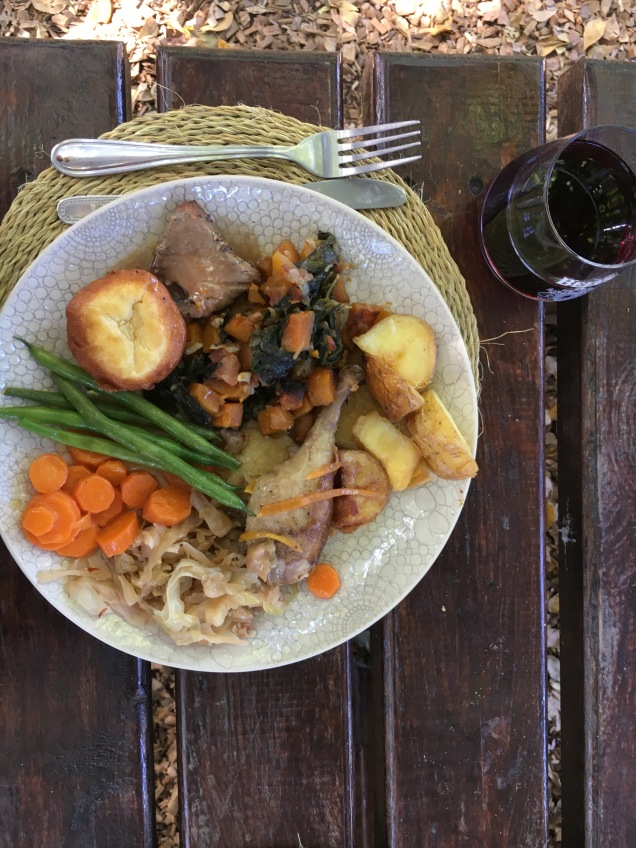 The next morning one of the young English boys came in to warn me to lock up my valuables, which in practice, was impossible because there were no lockers or locks on any of the doors. He said that a French girl who was staying in one of the tents had her bag stolen that contained her passport and camera. I later learned that an American girl who was currently working there also had a bag stolen the same night. In my opinion, it was inevitable. There were heaps of people crashed out on pretty much every plot of land on the property, some were known, some weren’t. Barefoot, spacy-eyed, dreadlock-laden youth (and others not so youthful) wandered around aimlessly after a blackout Christmas Night. The table surfaces were sticky and the soft sitting surfaces were moist. I still had a full day left and couldn’t bear to hang out around this swamp any longer.
I wanted to go paragliding, which isn’t expensive in South Africa, but my remaining cash wouldn’t cover it. I negotiated with the desk to use my credit card to pay for it, the one they had on file after I prepaid my accommodation. Great, let’s book it! Great, it will cost 400R for the taxi to get there, cash only. The wind went right out of my sails. I didn’t have enough. So with my chin up, I packed a bag and went to the beach instead (not an entirely terrible way to spend a day in December). 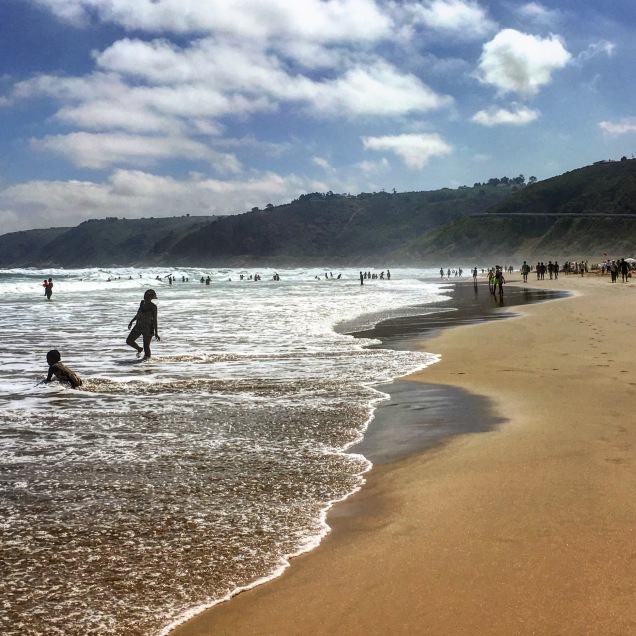 It was only an hour to Knysna on the bus and I was off to my next earthy destination. My hostel was virtually empty except for some locals and some malnourished Australians who were more interested in drugs than food. Knysna is perhaps the largest city on the Garden Route and it was where I had requested my debit card be sent so I was eager to see if it had arrived. The woman at PostNet could not have been nicer. My package wasn’t there, although the tracking number indicated it would arrive soon. The woman took my number, called me, and when I didn’t answer because I was outside of wifi range, she delivered it to my hostel personally. What a relief to finally be back in business after nine days without access to funds!

In Knysna, I frequented the waterfront restaurants with the typical holiday crowd and was warned not to stray too far from the city center. Bad locals, I was told. I was keen for a hike, but grim faces warned me to not go alone. Thieving locals, I was told. I wanted to walk along the coast toward a popular viewpoint. Again, I was threatened with drunk and idle locals.

Against my better judgement, I was unfortunately convinced to rent another bicycle to pedal uphill to a viewpoint. Why, you ask? To ride past the drunk and idle locals on my single speed rented cruiser. Ok, fine. The initial path was flat and scenic, meandering next to the coast and marshy inlets. Where I expected to see these erratic locals, there were only a few families with portable BBQ grills for a holiday picnic. The hill was insurmountable with this heavy piece of metal so I pushed it up for 30 minutes to the top of The Heads. All in, though, it was so worth it. Incredible views of the Knysna Lagoon and the weather was ideal so it was a peaceful place for a well-deserved break before plummeting back down the same hill firmly pressing the brakes. 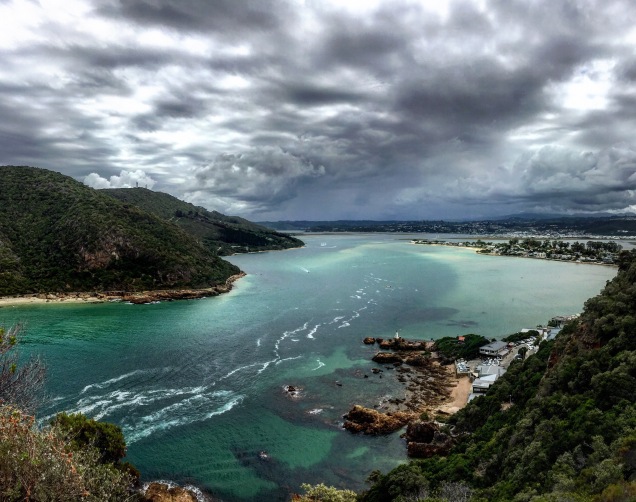 Another day, I spontaneously decided to rent a kayak when the office for stand up paddle boards was too crowded. I thought I would paddle for an hour, two at the most. I wanted to get a little exercise while exploring the lagoon and the backwater canals. Several boys stood on the dock so they could get me packed in and sent off in my kayak. I left a small backpack and my shoes behind, while deciding to bring my water bottle and my phone wrapped in a waterproof bag and tucked into my life vest. I still marvel at how I kept my phone dry and above the water, but I just knew there would be lots of opportunity for photos. I was told it would take me about two hours to go around a small island in the lagoon, finishing in the canals before coming back to the dock. I propelled myself into the wind in the lagoon, with waves I felt sure would send me capsizing. I couldn’t rest even for a minute because I would lose ground more quickly than I could gain it. I paddled for nearly an hour before I looked over my shoulder to see I was still much closer to where I started than I should have been. On another day, I might have turned around, but on that day I was determined so I paddled faster and harder until my shoulders and triceps were screaming. Finding the inlet that would allow me to finally go around the island and have the wind at my back wasn’t any easier. I had to carefully pull out my phone a couple of times to examine the map until I realized there was a big plastic map taped to the front of the kayak. Might have been helpful to know….

When I finally began to turn, the waves began pushing me into a shallow marsh so I had to get out and drag the kayak to the other side, fighting the wind and waves the whole time. Climbing back inside I expected to feel the wind gently guide me along, but it was perfectly still. I was now in an area that was completely protected from the current and swells and the wind. I had been at it for two hours. I was exhausted, yet I could now see the expensive homes that marked the entrance to the canals so I continued. The houses still remained distant so on two occasions, I stopped to ask some fishermen if I was going the right way, hoping they would tell me that it was closer than it appeared. More time passed and I entered the canals as if this was the homestretch….and it was except it also was a confusing labyrinth of waterways which had me constantly checking the map. Then it became a race against the clock – I was coming up on three hours and I had zero interest in paying for a fourth hour. When my poor wind-beaten kayak arrived back at the dock, the crew said they thought I was lost because it never takes anyone that long to go around. You can imagine my amusement when they said they usually send kayakers in the opposite direction so they can return with the current – they just forgot to tell me. 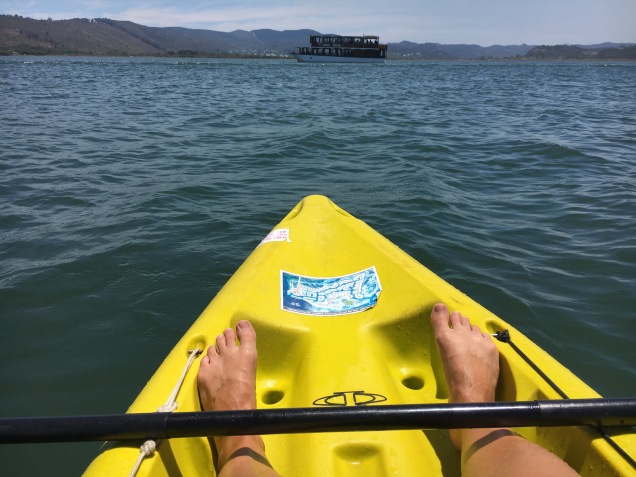 I left Knysna the next day with a couple of good workouts under my belt and some cash in my wallet. I wasn’t going to let the Garden Route beat me yet. 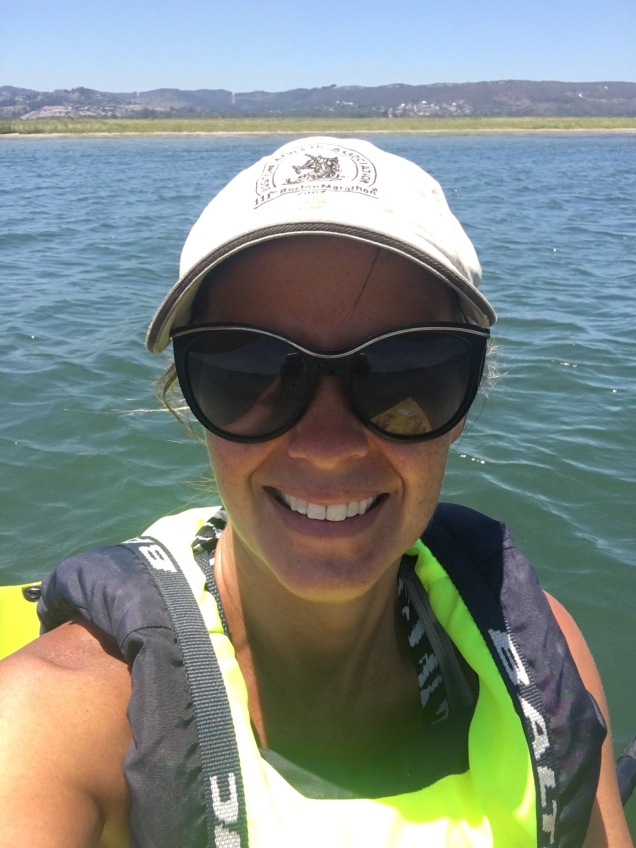