One of the most obscene wastings of food I have ever witnessed occurred on the border between South Africa and Botswana. Earlier that morning I left from a lovely boutique hotel in northern Johannesburg on a Nomad Africa camping safari with 14 others, including Tomas from Chicago, Liz the American living in Istanbul, Emil and Elin from Sweden, Michael and Julia from Australia, 4 Brazilians, a mother and son duo from Belgium, John from Australia, and Paola from Holland.

The truck was almost identical to the one that we had used in Kenya and Uganda three months earlier. Our guide was Amen, Doc was our driver, and Clever was our cook. They were all natives of either Zimbabwe or Zambia and worked really well as a team, hilarious and great fun all around. Our very first day we would be crossing the border to Botswana so we stopped at a supermarket just before the border to gather some supplies, including all of the food that we would need for the next several days of camping – fresh produce like oranges, potatoes, tomatoes, spinach, and onions and animal items like chicken, eggs, and milk. In addition, the passengers were also encouraged to buy any alcoholic beverages that we wished and other personal snack items. In hindsight, it’s kind of funny how much we bought personally, as if we would never see another supermarket. I think it was about three days until we stopped again.

Before leaving the parking lot, Amen warned us that we would have to hide everything for fear that it would be confiscated at the border. He told us that Botswana imports almost all of their produce from South Africa; however, it can only come in with a permit which he did not have. They stashed all of our alcohol, fruit, and a couple of other produce items in a bin in the far back of the truck. He said that they rarely looked that hard and we should be fine. I was about to get my first real introduction into African politics.

Our passports stamped, the only thing preventing us from continuing our journey was a luggage inspection. Amen opened up the storage compartments and immediately the officials began taking all of our produce – the items that weren’t hidden away – and throwing them in a bin. Most of the conversation happened in the local language and we only observed from inside the truck, but from what we could gather, the list of restricted goods had recently changed and now there were several new items that were not permitted. Our stowed goods were not noticed and were left alone. From the safety of the truck, we surmised that the officials just wanted to take our food home to their families or else were expecting a bribe. Either way would be a benefit to their cause. But with 15 foreigners on the truck and about 5 officials gathering at the spectacle, there were too many people to bribe and there was nothing left to do but to ruin the lot of it. They took all of our meat, eggs, produce and bread and proceeded to pour the milk all over it in a large plastic bin. I still kind of hope someone went through it and was able to salvage some edible items, but it wasn’t us. We were sent on our way without proper food, although there was enough alcohol for a small army that we secretly got to keep.

As I write this now, I googled the allowable produce because I couldn’t remember the details of what was taken. The government site for Botswana does indicate that the list changes frequently because of current disease outbreaks, but it also indicates an allowable amount per person that far exceeds what we could possibly have had in rations. This is Africa, folks, warts and all.

Our first day was a driving day to our destination near Kang, Botswana. We set up camp behind a petrol station and ate in the restaurant attached to it. It was our first opportunity to get to know each other without the noise on the truck. We organically and loosely separated into two smaller groups – the Americans, the Swedes, and the Aussies in one group with the Brazilians, the Belgians, and Paola in the other. This was somewhat based on age demographic and ability to speak English, whereas John the jokester kind of bridged the gap between both groups with his tiresome rhetoric. Only some of us were camping while a few were staying in accommodated rooms, which further served to join us or separate us in a different way.

Tomas, originally from Mexico, was currently living in Chicago and it had been ages since I had met someone from my hometown so he and Liz and I became good friends. Liz had been teaching English in various places, but most recently had been teaching and living in Istanbul where she met and married her Turkish husband. Elin and Emil, traveling together as friends just before he was on his way to study in Australia, were dubbed the Swedish Mafia for a reason that I can’t recall. And Julia and Michael were newly dating and were both very photogenic.

The following day we continued driving deeper into the Kalahari Desert until we reached a remote camp. The threat of rain was imminent so we rushed to set up camp when we arrived. Liz and I had placed our rain cover and were prepared by the time the rains came. The other campers were falsely confident and had to run to take care of it at the last minute. A storm in the desert comes in with violence and anger and departs just as abruptly with a whisper. The sun returned.

We went for a bush walk with a traditional Kalahari bushman, who showed us signs of tracks and scat and how they identify the species. He showed us plants that are edible and those used for healing. He showed us how to hunt with poison arrows and how to make a fire. He even showed us a juicy green caterpillar that is considered a delicacy in the Kalahari diet. And he did all this while wearing animal skin briefs and carrying a jackal satchel for his bow and arrows. It was a bit put on for our benefit – many of the Kalahari bushmen no longer wear this costume, favoring instead western-type clothing. And many of them now supplement their diet with supermarket goods, but some hearty souls are trying to keep the traditions alive. 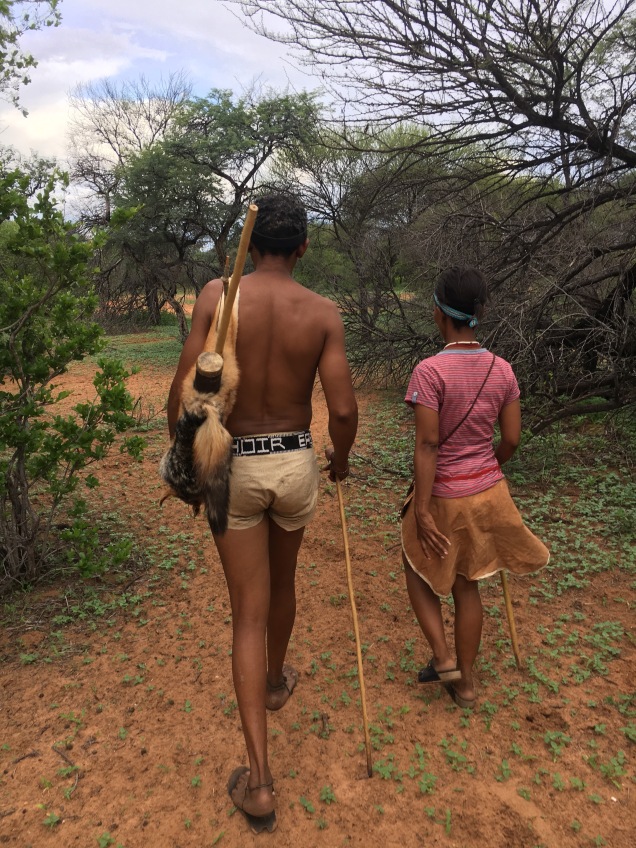 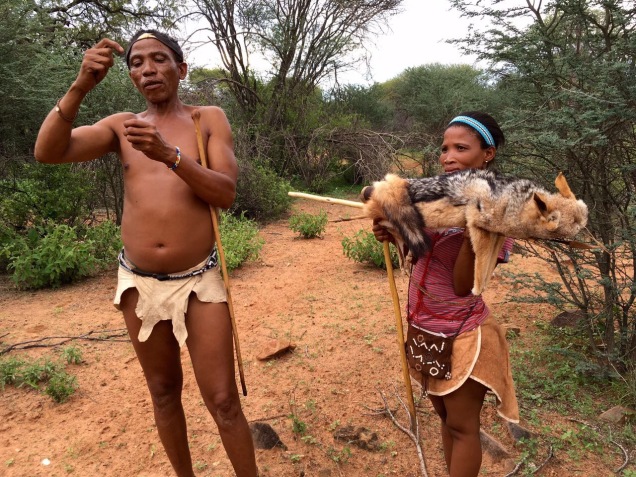 After it had grown dark, we were to meet at the main lodge where our accommodated friends were staying so we could walk to a fire dance ceremony together. It was pitch black and we brought our head torches for guidance. The dance was incredible to watch. Approximately twenty men and women danced to songs played on reed or wooden instruments, songs with names like “The Hunt” and “Rain.” They would slowly move in a circle and then it would increase in speed, but their movements were generally always the same. At some point, we became aware that Paola was there and she was NOT happy. Apparently, she had been left behind at the lodge and had to struggle to find her way in the dark to the bonfire. She was not only angry with her guides, but also with every one of us, and she was not shy about letting us know. She refused to speak to any of us for the next couple of days. In truth, I felt bad for her. She didn’t speak English well and she was trying to navigate between lots of different accents. We tried to apologize, yet she was having none of it.

John, who was never to be taken seriously, had a joke about everything. It was charming at first, although it became clear that he needed a purpose so we assigned him to watch out for Paola to make sure she wasn’t to get lost again. We were also hoping it would help him stick to our time schedule. When we were intended to depart at 7:00am, for example, knowing that we would have an 8 hour drive (or more!) ahead of us and the rest of us were ready and sitting in the truck, John would casually stroll up several minutes late and tell us he had forgotten his hat or his book and needed to go back to get it. It was beginning to feel like we were herding cats – wet and wild desert cats, but cats nevertheless. 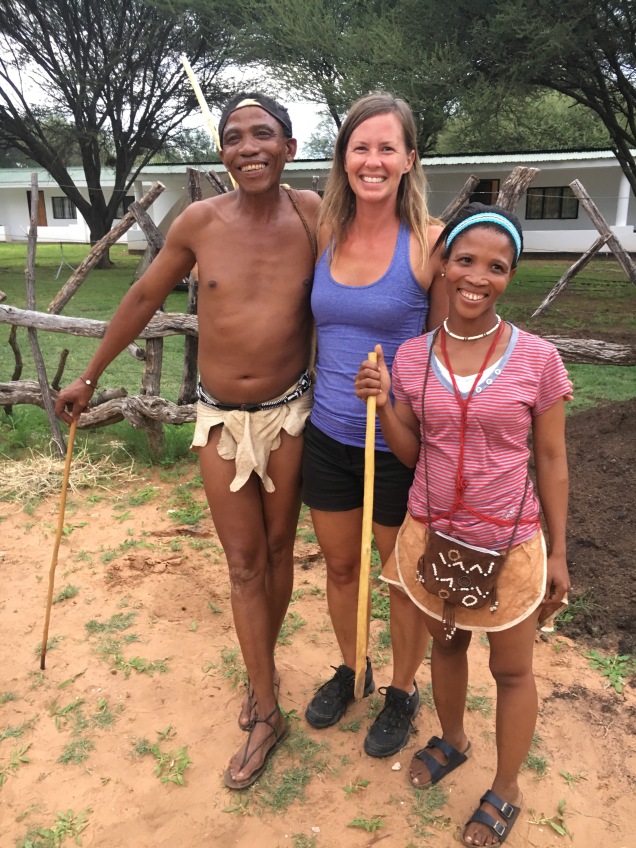