Day 696 of travel started out with a drive that day took us to Maun, the gateway city for the Okavango Delta. A deluge of rain was falling when our truck pulled in to the supermarket parking lot. It was another opportunity to stock up on provisions and withdraw some Botswanan pula, the local currency. Some people opted to stay on the truck because of the rain, but I waded through puddles that came up to mid-calf in an effort to stretch my legs. When the truck was moving, you kind of had to stay seated unless you wanted to be tossed around like a salad. Just as quickly as the storm had rolled in, it was gone and clear and the puddles receded into almost nothing.

That afternoon we would have the opportunity to take a scenic flight over the delta at the price of about $90 each, which was just too good to pass up. The flight would be about 45 mins and we would do a low pass both ways over the marshy inland delta. I didn’t wholly expect to see much wildlife, yet it would be a different perspective over this famous natural reserve zone and it would be fun to go with so many new friends, especially those that had never been on safari before.

We had two planes with 5-6 people each. My plane included John, Elin, Emil, Tomas, and myself. It was within 5 minutes of takeoff that we were already soaring over the Okavango Delta. It was incredible. You could make out the overflowing riverbanks and the network of waterways that were teeming with life. It was green as far as the eye could see until…. there was movement down below. “Elephants!” I shouted. Everyone jerked to my side of the plane, but we had already passed. Now this was getting real. With the knowledge that we COULD actually see wildlife and the expectations were set for how tiny they would be from our altitude, everyone began seeing life forms moving about. Loads of hippos, a few giraffe, more elephants, herds of antelope, and even a crocodile sunning itself on land were some of the creatures to be seen from the air. My love affair with Africa continues…. 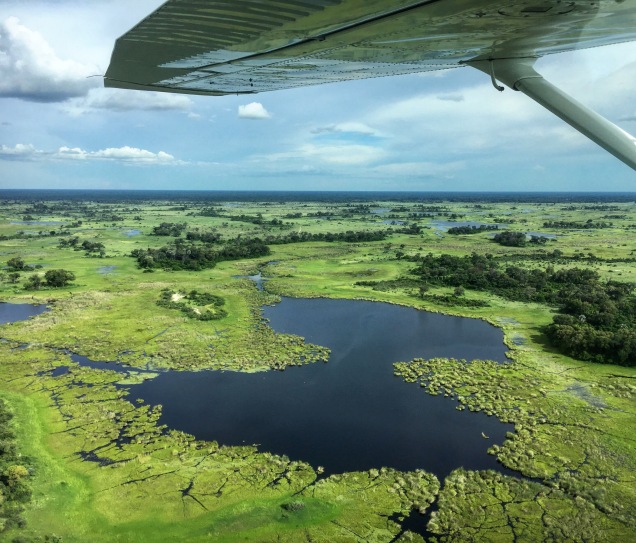 When it was time to actually venture into the delta by land, the accommodated members of our group took their own flight directly to their lodge, while those of us camping would have to drive. Our Nomad Africa truck took us to the mouth of a rutted dirt track to wait for our further transport. It was raining again. The 4-wheel drive truck approached and was covered in mud with rain flaps secured around the back to hold us in. The rain flaps created something like a sauna, but we could hardly even adjust position for fear of being jolted off the seat.

Our camp was a semi-permanent camp with tents set up in clusters to accommodate the number of people they expected. We were 5 tents for 9 people all lined up in a row. We amused ourselves with card games and trying to capture photos of the blue-balled vervet monkeys until it was time for an evening sunset boat cruise. We rejoined our other friends at their lodge, which was an extension of our campsite, and set off from a murky shoreline that the Australians were just sure was home to monster crocodiles. I’m not doubting this was entirely possible, yet only an Aussie would even think of that. 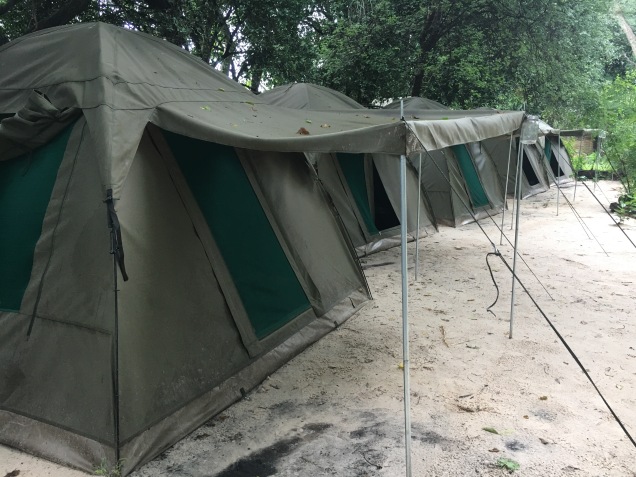 We had been warned that we were visiting the Okavango Delta during the rainy season, not the best time of year for wildlife spotting. During the dry season, the water is virtually contained to very specific watering holes where all the animals must go to drink. Tours into the delta at this time of year are often conducted in overland vehicles and they search out wildlife on land. During the peak of the wet season, there is so much water that the remaining land is divided into a few large islands, which again, makes it easy to locate the wildlife. When I was there in late January, at the start of rainy season, the water is plentiful so that the animals no longer have to seek out watering holes and it starts to divide the land into many small islands instead of a few bigger ones. Thus, our boat cruise that evening was lovely for scenery, not so much for spotting wild animals. 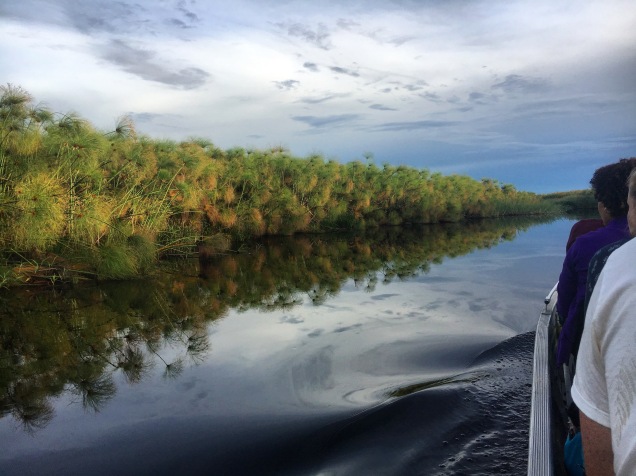 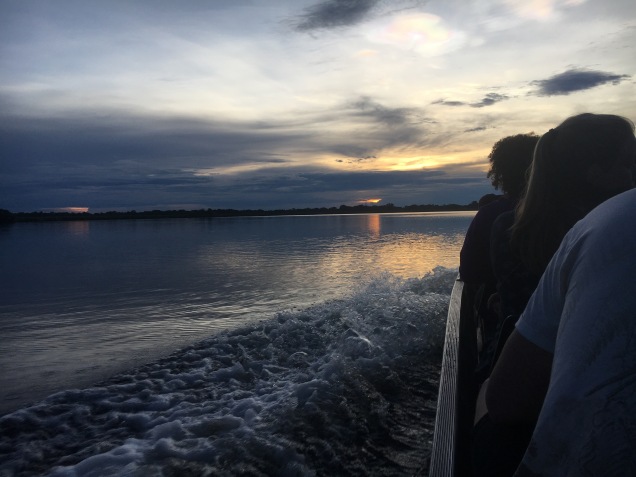 Later that night, Liz and I were just getting settled in our tent. Some of our fellow campers were already snoring when we noticed loads of vicious-looking red ants all over our floor. I hate killing insects when I’m camping, especially when we are invading their space more than anything else (unless it’s a mosquito – I will always kill a mosquito), but these guys were nasty and they were swarming. With our sandals we were beating them against the ground, hoping the ants wouldn’t suffer if we could give them one good pop. It was getting worse. Liz noticed the ants were actually coming in through the top of our door, which was zipped, yet somehow the ants were wiggling inside and hurling themselves to the floor or our cots or whatever happened to be underneath. My duct tape always seems to come in handy so I whipped it out as if brandishing a sword. I taped the open corners and for a time, it seemed to work, but only briefly. A few minutes later they were circumventing even the duct tape – it was clear our tent had been set on their nest. Shining the light on the mesh door, it was covered in ants that only had one mission – to go home. We were calling out for help and slapping away with our sandals; the other campers continued snoring. Finally, a worker came that had heard the popping of our sandals on the hard ground and rescued us to a new tent for the night.

Sleepy-eyed, we began early the next morning for a boat trip to an island from where we would launch in mokoros, traditional dugout canoes maneuvered by a long stick. Mokoros are now often made of fiber glass for conservation purposes. On the way, the motor boats glided through narrow streams where long grass was close enough to brush our faces. We saw one lounging crocodile and a variety of bird life, but otherwise the delta was quiet. Once at the island, floating in a mokoro is quite different. They feel incredibly unsteady as if a sneeze will be enough to send you into the jaws of a waiting crocodile or the domain of an aggressive hippopotamus. A tiny green frog, the size of my thumbnail, hitched a ride on my pant leg. The only sound was the slight movement of water and the occasional song of a bird.

Eventually, our mokoro took us to another island where we could disembark. Our local guide was tracking a hippo. You could still see flattened grass where she had been and the telltale sign of dung that was splattered on the path (fun fact: after a hippo defecates, it uses its tail to fling it all over the place – there are many theories but no one really knows why they do this other than because they can). We cautiously tracked her on land until you could see the deep muddy grooves where she had plummeted into the water only moments earlier. Unfortunately, no other creatures emerged that day. Before returning back to our motor boat via mokoro, we shared a picnic lunch with the mokoro oarsmen and a few members of our group were brave enough to awkwardly try to steer the boats themselves. 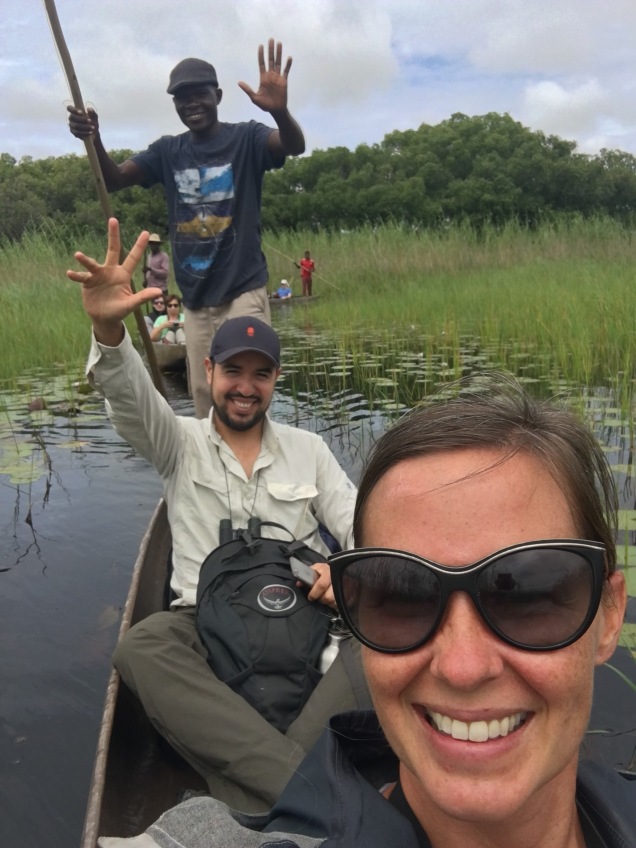 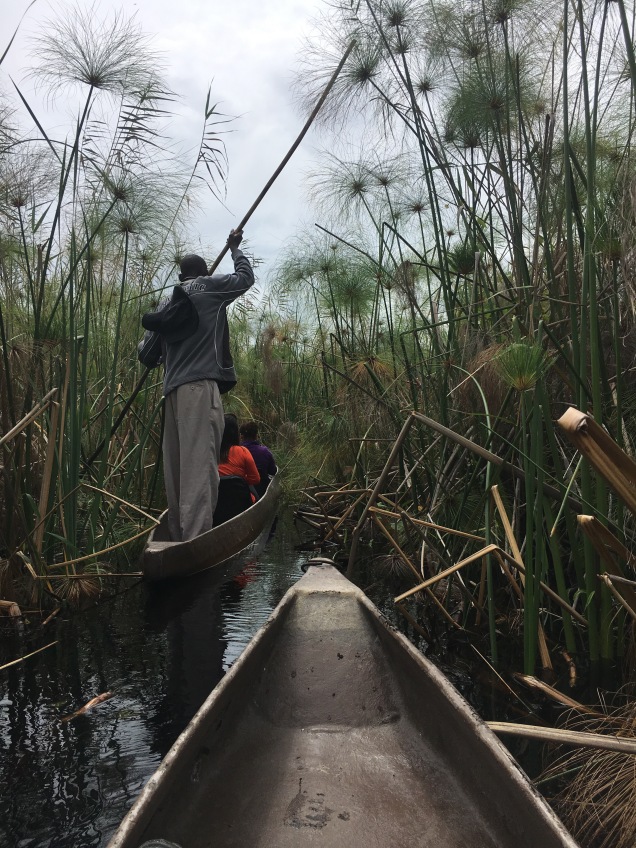 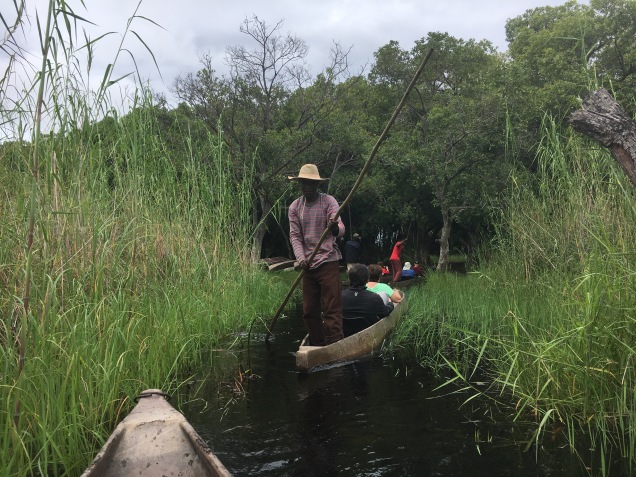 I had been looking forward to a safari in the Okavango Delta for ages, but I must admit I was feeling rather disappointed. We had seen so much wildlife from the air during our scenic flight; it felt like such a tease, not just for me, but for all the people I was traveling with that had never seen Africa’s wildlife up close. We retraced our steps out of the reserve by 4 wheel drive to rejoin our overland truck on the paved road. Again, it started to rain and we made a half-hearted attempt to protect our lunch setup from the elements.  When the clouds dissipated, a storm of yellow butterflies bid us farewell.  And so it went…rain and sun, rain and sun.

Currently reading: The Art of Travel by Alain de Botton