Swelling black rain clouds hung low over our bush camp in Hwange National Park, yet our new Nomad Africa tour group was claiming seats in an open air jeep bound for a game drive. Liz, Emil, Elin, John, and I were the only remaining members from our original group. We even had a new guide and driver. Now instead of campers being the majority of the group, we were the minority. Our two lonely tents looked rather pathetic with the impending storm looming in the distance.

Our safari jeep had a canvas draped over the top, but the sides were wide open. Almost as soon as we drove out of the camp grounds, the skies opened and dumped buckets of water. Huge rivers of mud flowed on the dirt track. I bowed my head so the water would drip down the hood of my rain jacket instead of pelting me in the face. Unfortunately, there’s not much hope of spying wildlife when you can’t see through the driving rain.

Just when our hope was fading that this would be another disappointing excursion, the rain abruptly stopped and rays of sunlight started illuminating the landscape. The clouds all but disappeared and the sky was blue. Still, the bush was quiet except for a few birds, wildebeest and jackals. The guide demonstrated a traditional gummy plant that was used as an ingredient in soap. Rubbing a small amount of the sticky substance on your hands would elicit a lather and a pleasantly clean scent. Next we came upon a scattering of sun-bleached elephant bones that had clearly been there for years and our guide took this opportunity to get out of the vehicle and talk about elephant anatomy. Meanwhile, the rest of us were anxious to see some live animals. 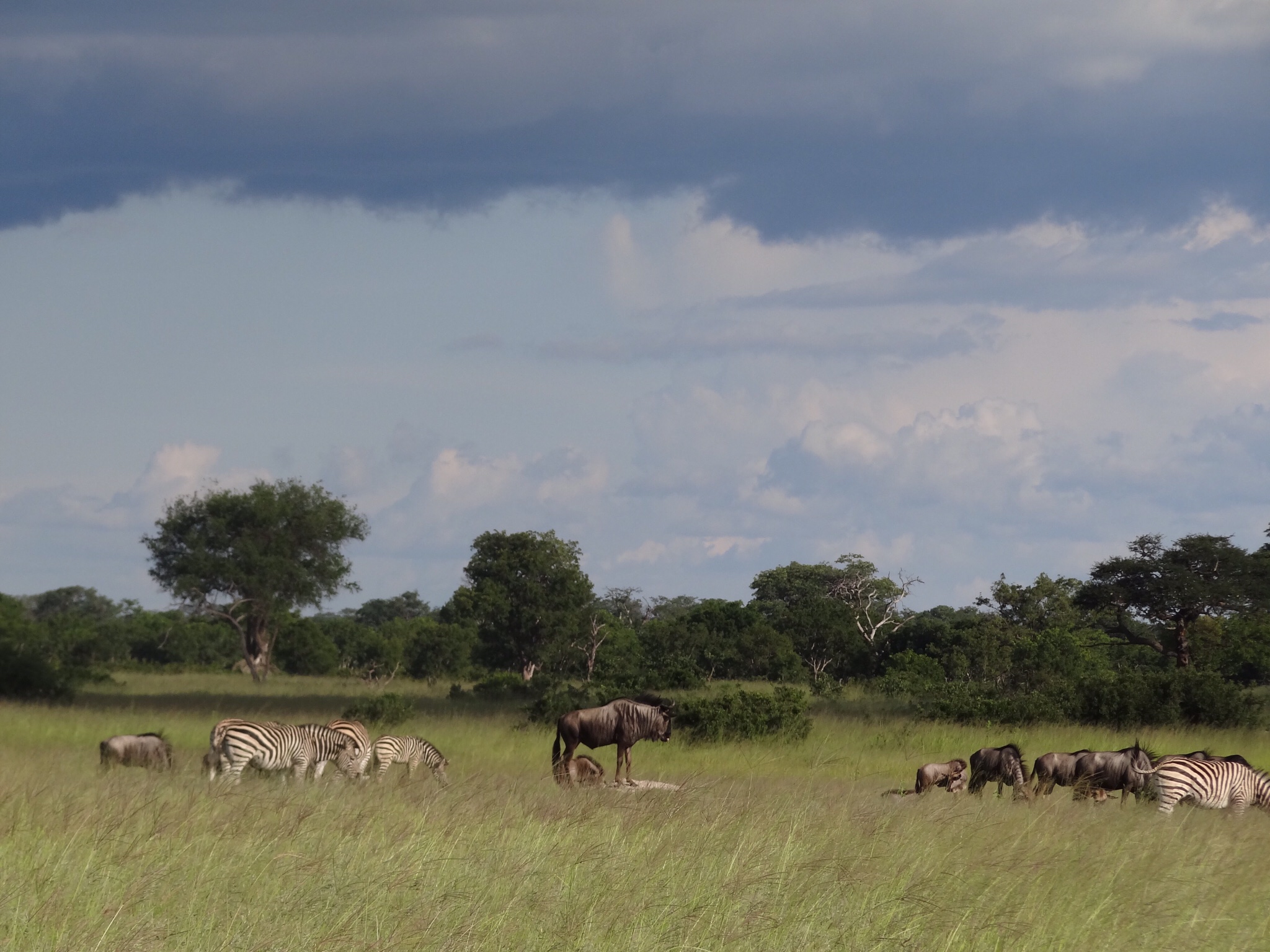 So far we had been driving at least an hour and were growing a bit bored when straight ahead there was movement directly in the track in front of us. If you blinked you would have missed it, but I didn’t blink. A chill down my spine I knew I had just seen a leopard in the road. Almost as if she was a ghost, she completely disappeared into the undergrowth beneath a tree. Slowly, quietly, we coasted closer until we were directly next to the tree. The thickness of the foliage produced a shadow on the ground, but if you knelt down just far enough you could see she was right there watching us. We were no more than two meters away, separated by brambles and thorns. At first, she seemed nervous that the slightest movement would send her sprinting away, but finally she relaxed as if she was prepared to stay put until we drove away. Knowing she was there and so close, but we could still barely see her was a reminder of how many creatures we probably miss on an average game drive. They are excellent camouflage artists.

Can you see the super close-up of the leopard?

A few minutes later a caravan of more safari jeeps were following us down the track and comically, our guide told us to pretend as if we were looking at birds. The guide driving behind our jeep asked if we saw anything and our guide said, “no, mate, it’s quiet today.” Reluctantly, we drove on, hoping the train of 4 more jeeps would follow us and leave our leopard alone so that we could return and have her all to ourselves. I found this amusing and a little exciting. Guides are usually fraternal and willing to share tips with each other, but in this case, four loads of Chinese tourists would definitely frighten our leopard so we successfully led them away. Nothing to see here!

After driving around in a big arc, we returned to the same spot and even though the beautiful cat was still there, the shadows had grown longer and it was almost impossible to distinguish her spots in the dark. Our safari was drawing to a close so it was time to start the journey back toward camp. Seeing the leopard, even if only for a minute, had reinvigorated our lethargic tour and we were boisterously recounting her dart into the bush and sharing the one or two photos that we had snapped in her brief visibility. I was staring straight ahead, smiling to myself, when I saw them. I would have thought it to be impossible if I wasn’t seeing it with my own eyes. What luck!!! A lioness and three tiny cubs casually sauntered in the road. She was carrying one in her mouth and the other two followed closely behind. In contrast to the jittery leopard, this confident lioness stopped, turned to look at us, and calmly continued on her way. We trailed her at a slow pace, but she didn’t seem to be bothered by us at all. A group of impala saw her coming and they anxiously kept a fair distance, but she was with her babies; this was not a hunting posture. From my experience on nine safaris so far, I had learned that lions and leopard, in particular, don’t like to stay in the grass after a rain for the uncomfortable sensation of having wet feet so our luck of seeing all these beautiful felines in the road, was quite possibly because of the rain. 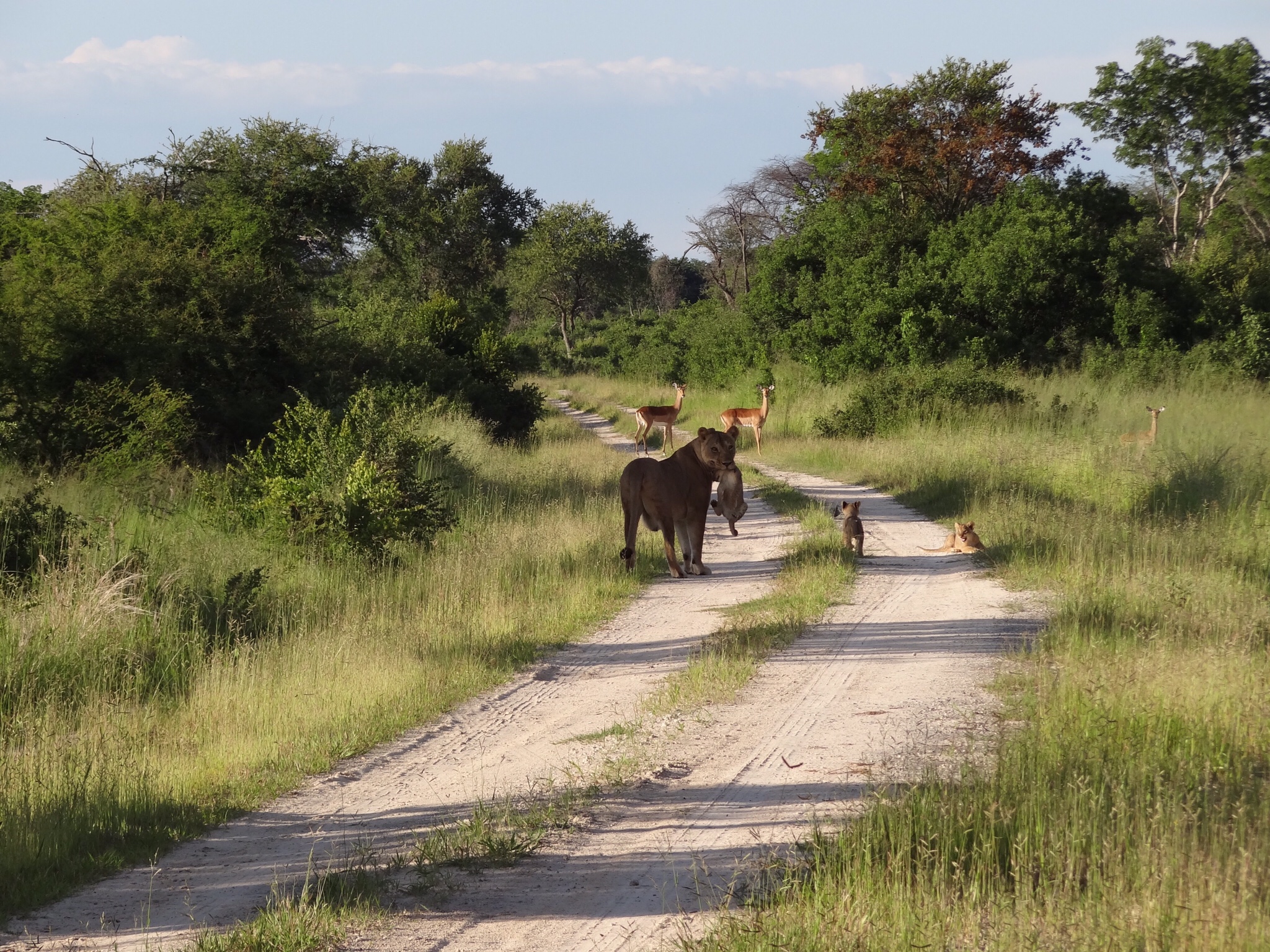 For about 200 meters, we watched her. Occasionally, she would stop to set down the cub in her mouth, readjust her grip, and pick it up again. These cubs were young enough that our guide predicted she was bringing them to introduce to the pride for the first time. When lion cubs our born, the lioness will keep them isolated from the rest of the pride until they are old enough to withstand the roughhousing of their cousins, usually about 1-2 months. There was a chance she would lead us directly to the rest of the pride. A rare ritual that our guide confessed he had never witnessed before, we watched our lioness set her cub down for the last time. As if by a telepathic cue, the three cubs darted into the long grass and were gone, while our lioness stood her ground staring down several more lionesses and a few older cubs. There was obvious tension until one of the new females moved toward the grass in the same direction the new cubs had just disappeared. The new mother seemed hopeful, yet ready to defend her cubs if it came to that. This introduction behavior does not always go smoothly. What happened next, we can only guess. All of the lions, big and small, moved into the grass out of view, but we could hear them playfully chuffing and growling a non-threatening greeting. This would be a happy reunion after all. 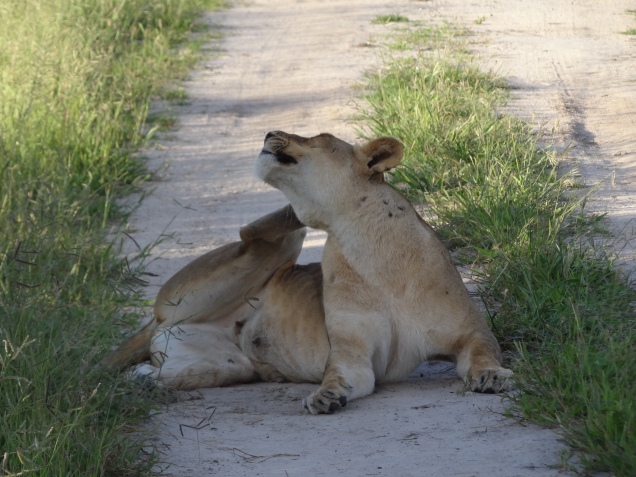 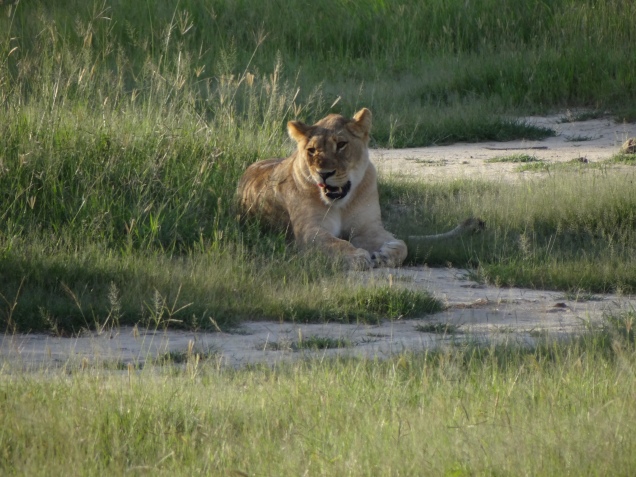 Back at camp, a few members of our group had heard that a family of giraffe were quietly grazing just outside of the campground perimeter fence. I stayed behind for a shower and a quick rest before dinner so I wasn’t there…but you know how when you’re with the same people for days on end and there’s that one that treads on the line between partially endearing and partially annoying beyond words? Liz had learned a new trick to take close-up photos using her smart phone and binoculars and had reasonable success most of the time. Unfortunately, this once, with her binoculars and phone completely lined up for the perfect photo of a grazing giraffe, John announced, “I have to pee,” and turned to his left to walk away. Thus, John did not pass GO when he leaped right over that theoretical line into gritting teeth and eye rolls for the remainder of the week. The giraffe also does not seem amused. 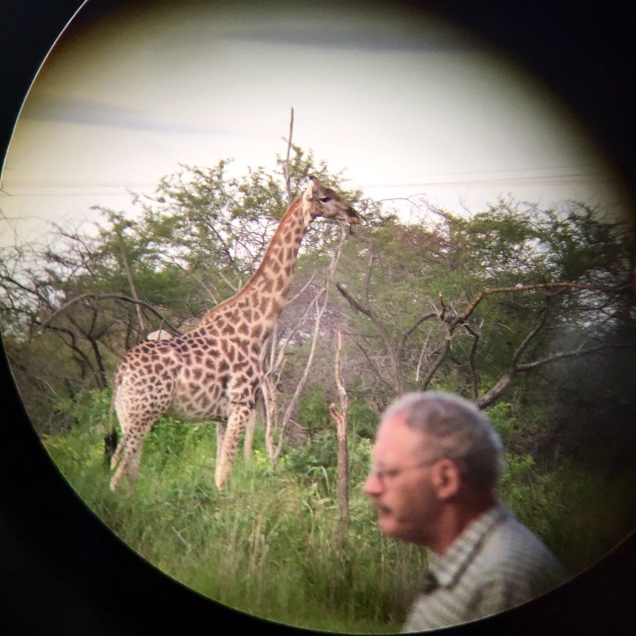