One thing you should know about land travel in Zimbabwe is that the police sure do love roadblocks. Besides the standard elephant crossings, which continued all the way back to South Africa, we were frequently stopped by police. Our guide had warned us this was a ubiquitous practice in his country and requested our patience while he navigated the widely-accepted corruption on our way. It is common knowledge that the intention of the roadblocks is to shakedown the public and to elicit bribes for the massively under-funded law enforcement. Our monster safari truck full of western tourists was no exception and no doubt police payoffs are factored into the price of a safari in Zimbabwe. Usually the police would issue a citation for something benign and require a fine to be paid on the scene before returning the driver’s license. All of our stops were taken in stride, money exchanged and went off without incident, but this isn’t always the case. The country’s citizens completely lack respect for the police as a result and would often drive away from roadblocks rather than stopping and playing through the charade. To stop people from driving away, the police set up spikes in the road and the escalation of tension continues with aggressive fighting and sometimes violence. 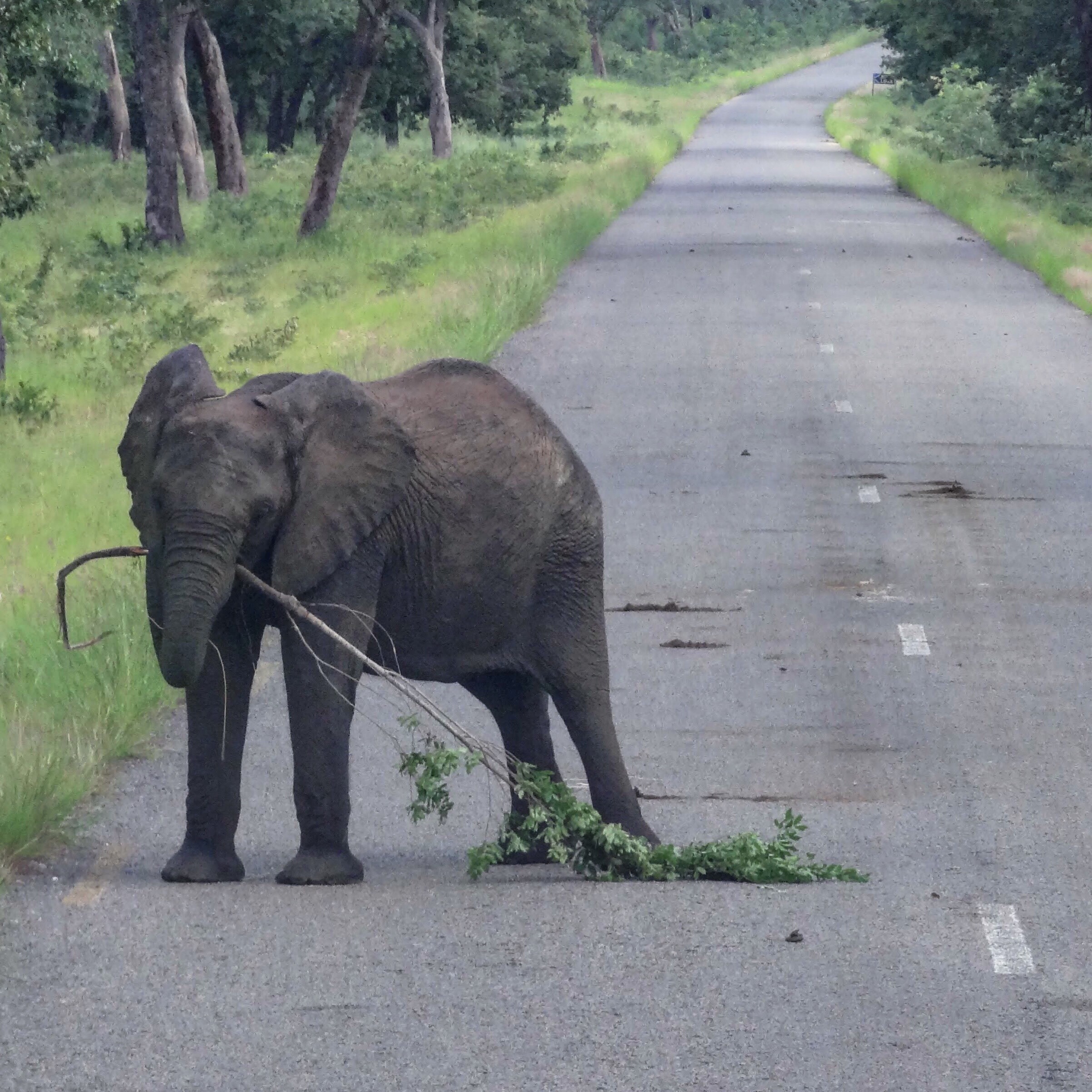 By the time we arrived to Zimbabwe’s second largest city, Bulawayo, we were ready to stretch our legs. Our truck parked in town so we could patronize the supermarket and stock up on supplies. I needed insect repellent, which was surprisingly difficult to find in a country boasting a high statistic of malaria. After checking a few stores with no luck, my guide escorted me to a pharmacy a few blocks away. They had the South African brand, Peaceful Sleep, in a small roll-on stick displayed behind a glass case so that we had to engage the sales clerk in order to retrieve it. The woman spoke English, as does most everyone in Zimbabwe, but she spoke to my guide in her local language while she retrieved the roll-on stick and presented it to me as if she was displaying fine jewels. They exchanged a few words and then my dejected guide muttered a quiet apology to me as the woman proudly announced a $5 price tag. I paid it as she wrapped up the stick in double plastic bags and bid us good day. I can only speculate that we were on the losing end of an insect repellent price negotiation. On our walk back toward the truck, my guide repeatedly assured me that I had overpaid just in case clarification was still necessary.

We were staying at a boutique hotel in Bulawayo, rather than camping. The rooms were relatively modern and set around a garden courtyard. It had an inviting swimming pool to cool off from the humid climate. The plan was to visit Matobo National Park, a short drive to the south. Named for the Matobo Hills, stacked granite rock outcroppings, the park has earned UNESCO status for its large protected area of breeding rhinoceros. We were 100% guaranteed the opportunity to walk with rhinos. 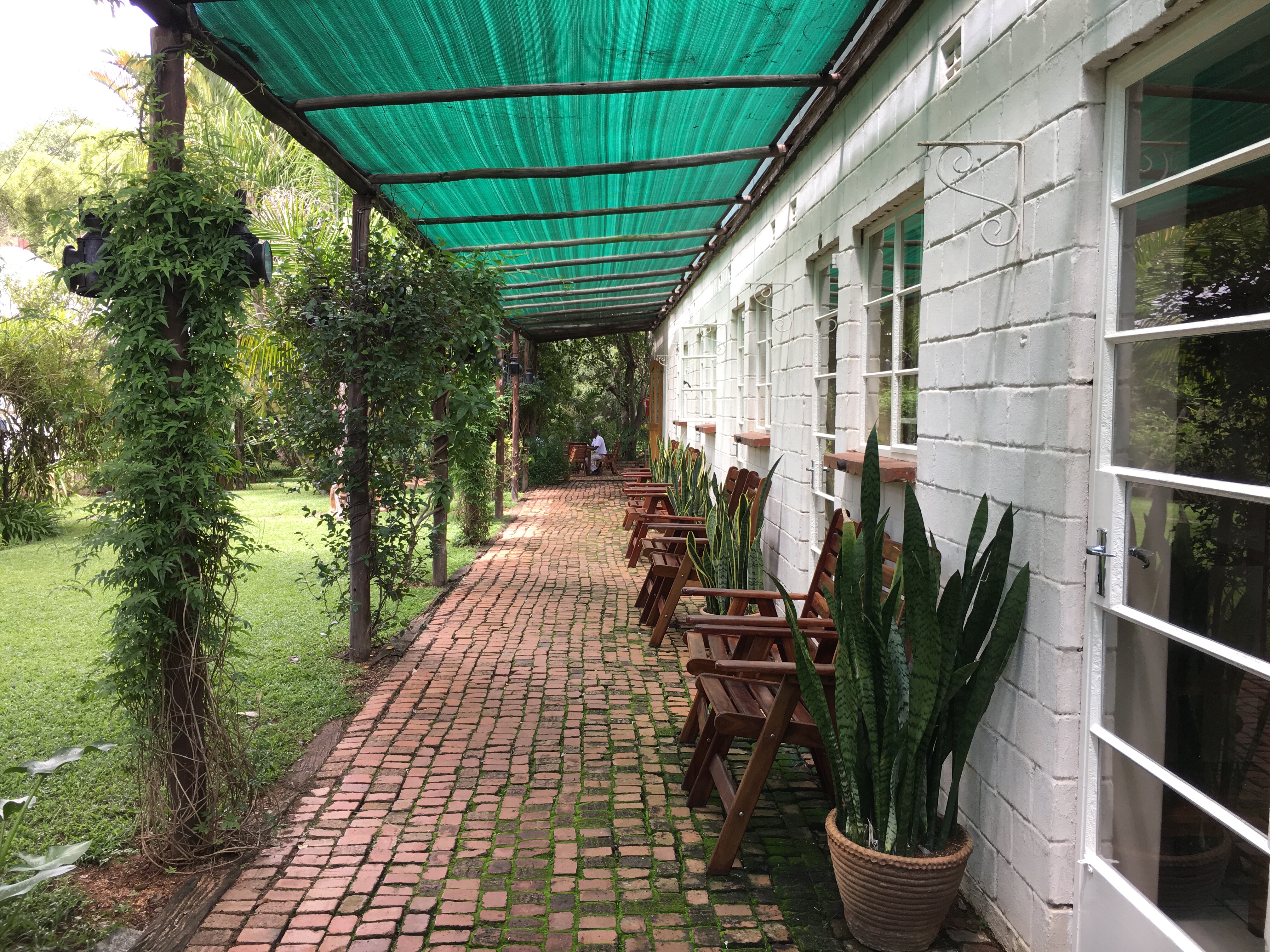 One of the great debates in Southern Africa of modern times is about legalizing the sale of rhino horn. Rhino horn is made of keratin, essentially the same material as found in fingernails and hair. If cut, it will regenerate in some period of time so is potentially a renewable resource. Unfortunately, it’s far easier and more lucrative for poachers to kill a rhinoceros and take the horn illegally. Opponents of legalization would like to eradicate the demand for rhino horn, most of which originates in China, Vietnam, and other southeast Asian countries. They believe that the only way to save the rhino is to impose stiff penalties of fines, jail, and/or death for the poachers responsible. If rhino horn were legalized and harvested in a safe and humane manner, then it would become more difficult to distinguish the difference between legal and illegal rhino horn.

Proponents of legalization acknowledge the fact that the demand is likely to never go away. Rhino horn has been used in traditional medicine as a treatment for anything from cancer to erectile dysfunction since the dawn of time and trying to convince billions of people that they might as well consume their own fingernails is a losing battle. Proponents argue that flooding the market with legal rhino horn will actually bring down the cost and poaching will become a less lucrative business. Rhino farms already exist in several countries, but no decision has been reached on whether rhino horn can yet be sold legally.

In Botswana and Zimbabwe, anti-poaching units are authorized to shoot-to-kill if a suspected poacher is spotted within a national park. In South Africa and Namibia, the business is far more dangerous because an anti-poaching unit can only shoot if they have been fired upon first, which is rarely the position a park ranger wants to find themselves in. I arrived in Africa as a strong opponent to legalization of rhino horn, but after meeting Rudy and Marlice Van Vuuren in Namibia and our Matobo guide in Zimbabwe (all conservationists and passionate proponents of legalization), I see the merits of this position. Much of what I knew about conservation came from reading western publications and literature paid for by US or UK-backed organizations. While I do believe that these organizations mean well, I no longer believe it’s helpful for someone sitting in a tiny office in New York City to decide what’s best for a national park in Zimbabwe. The opinions and the experience of those working with the animals on the ground are definitely valuable and should be the basis for the ongoing battle to save endangered species. Westerners don’t always know what’s best. 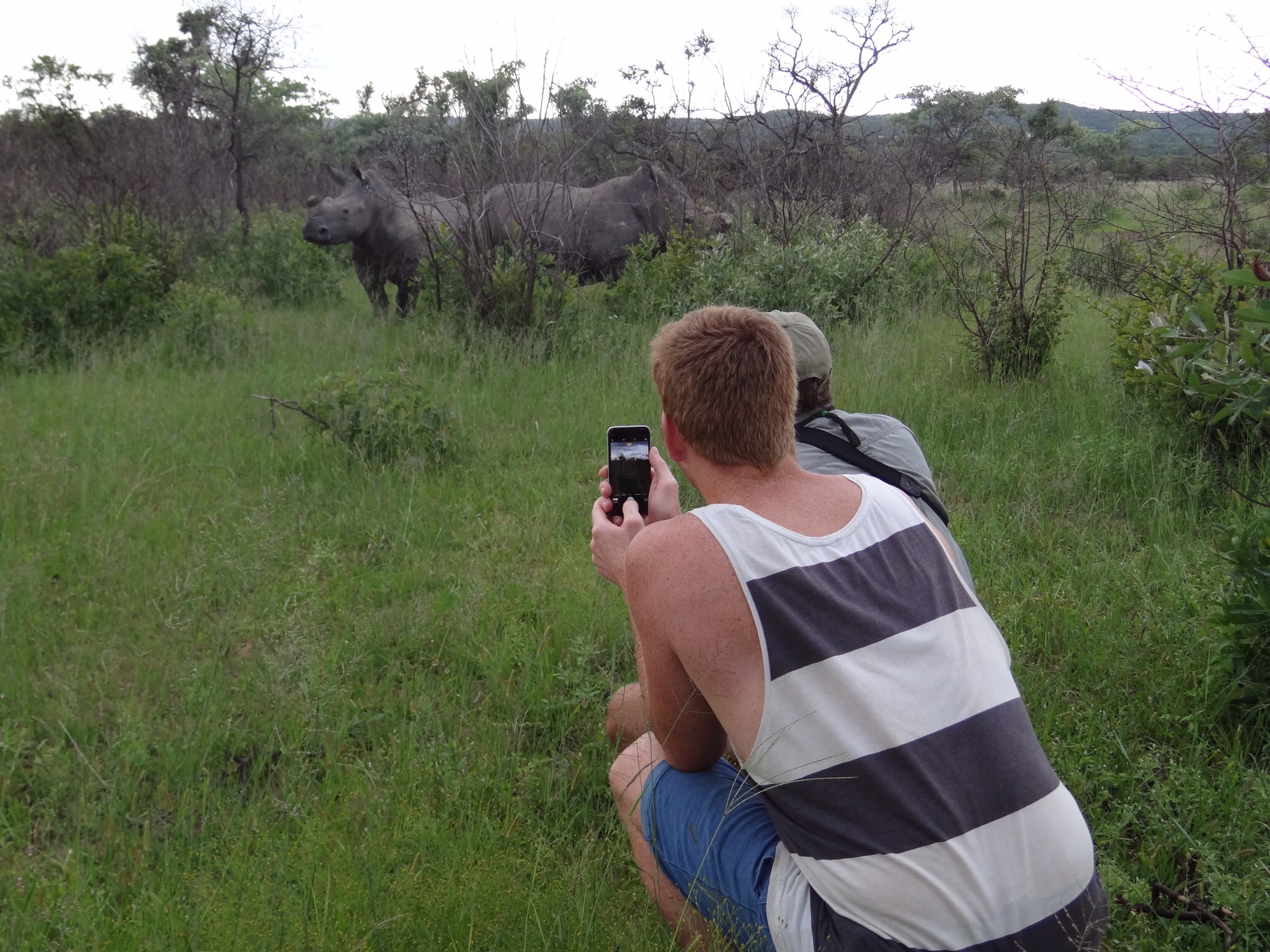 Matobo National Park can guarantee rhino sightings because, for 24 hours a day, every rhino in the park is followed by an armed guard. We only had to call a ranger on the radio, obtain their position, and off we went for our chance to walk with one of the most endangered species on the planet. The jeep was equipped with a jump seat in the front of the hood and Emil rode first, taking in the scenery without the encumbrance of doors or a roof. Our first stop was an adult female and a young calf, who were a little skittish of our large group, not allowing us to get very close. Never fear, we called a second ranger for their position. During my turn to ride in the jump seat, of course, the rain poured down in sheets and I acted as windshield for the rest of the passengers. But it was fantastic to see the park from this perspective in spite of the rain dripping from my nose. For the second stop, we parked on the dirt road and had to walk quite a distance through scrub brush and thorns, keeping an eye out for snakes. Our guide was tall and lean with leathery tan skin. He wore shorts and sports sandals and chain-smoked the whole day, not the least bit bothered when a two-inch long thorn stabbed him in the leg. 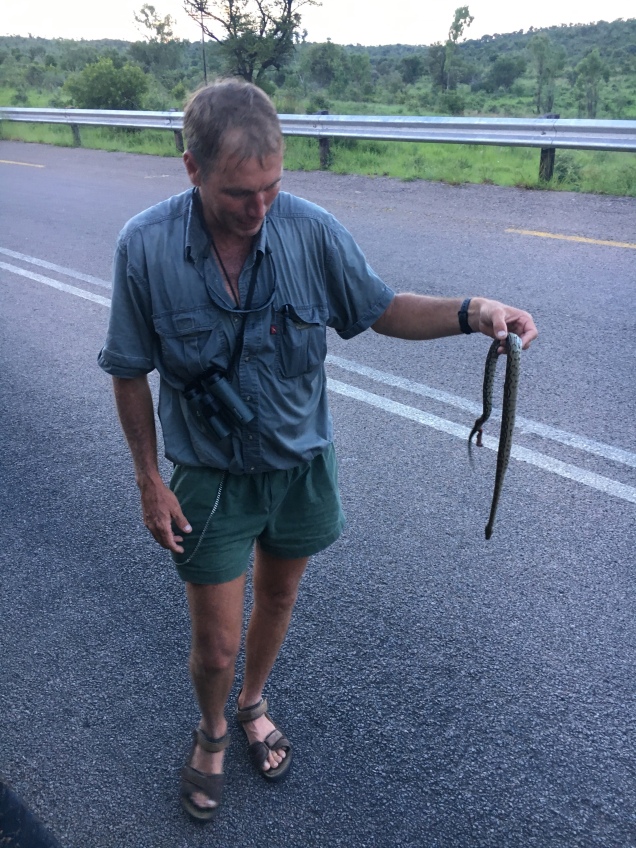 When we finally reached our new family of rhinos, there were approximately 4 adults, peacefully grazing. Now we could finally get a good look. All of their horns had been carefully removed so as to deter poachers and without them, they looked like prehistoric cows. They weren’t bothered by us at all and if anything, seemed relaxed when they recognized our guide as a friend. I had the same excited feeling as the day when I ran with the cheetah at N/a’an ku se, knowing this was perhaps a once in a lifetime opportunity and reinforcing my drive to want to protect such majestic creatures.

We then climbed one of the Matobo Hills to see if we could garner the position of even a third group, which we eventually spotted near the park entrance. Our time in the park was drawing to a close when the sun was dropping low in the sky and the location of these rhinos, so close to the road, worried our guide as he called for backup for their protection in the dark. 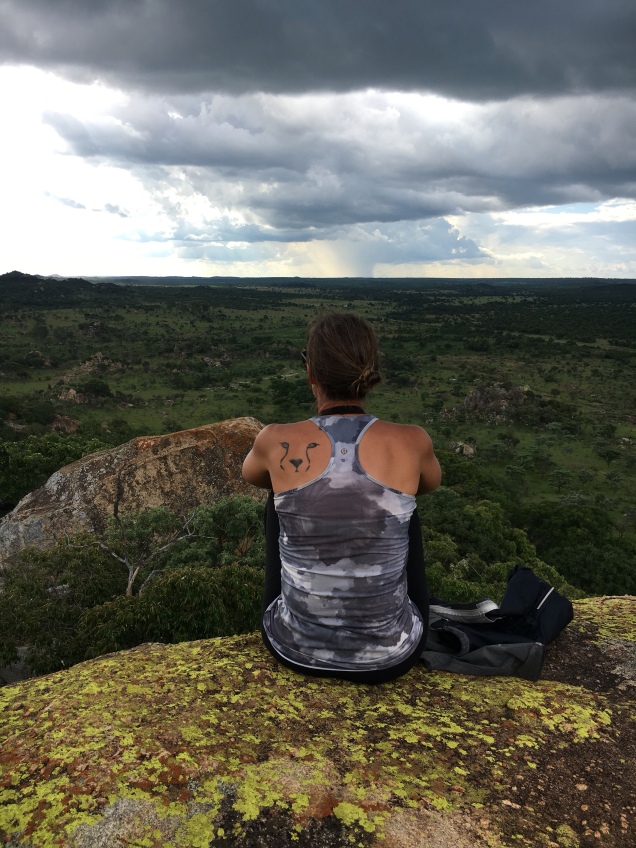 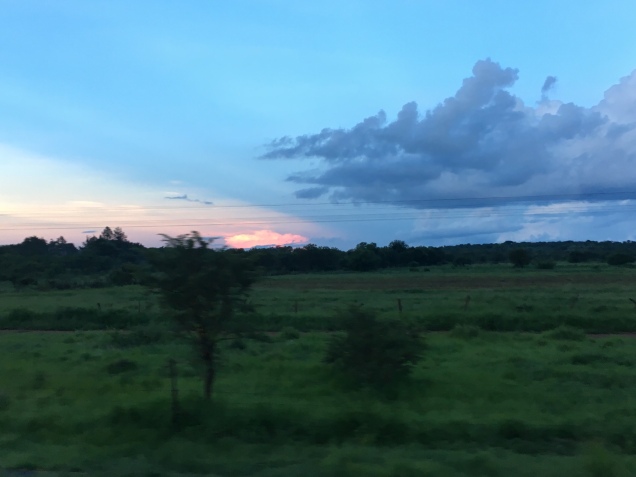 Matobo was a highlight on a tour full of other highlights so I was personally a little burnt out by the time we reached the Great Zimbabwe Ruins the next day. I recognize that it was of political significance during medieval times, that it was originally constructed by the native Shona people, and that the buildings fell into disuse in the 15th century after trade declined and environmental changes made the area less desirable. Beyond that, I found it difficult to pay attention to our soft-spoken guide in the arid heat. Nevertheless, these ruins are by far the largest of their kind anywhere in sub-Saharan Africa. For a region of the world not often associated with ruins, I was impressed.

As our journey was drawing to a close, we would spend our last night in Tshipse, South Africa. Of course, this meant that we would have to cross one more land border. This one could take anywhere from one to eight hours because of the large volume of commercial shipping between South Africa and Zimbabwe and the high level of potential bribery negotiations that might take place. As luck would have it, we were not intensely inspected and it took us only one hour to pass immigration. We were left with a good chunk of time to enjoy the manmade hot springs at our new camp ground.

Liz decided to splurge on a brick and mortar room for her last night and was kind of enough to invite me to share. The grounds were packed full with holidaying drunken South Africans, enjoying the pools of varying temperatures. A family of mongoose pilfered grubs and lizards from the lawn surrounding the cottages and our final evening’s braii (a South African bbq) went well into the wee hours of the morning. I had one more adventure left in me to go to Kruger National Park for a few days before I left the continent, but meanwhile, I reflected on all of the amazing experiences in Africa over the previous 4 months and was already scheming on a chance to return.